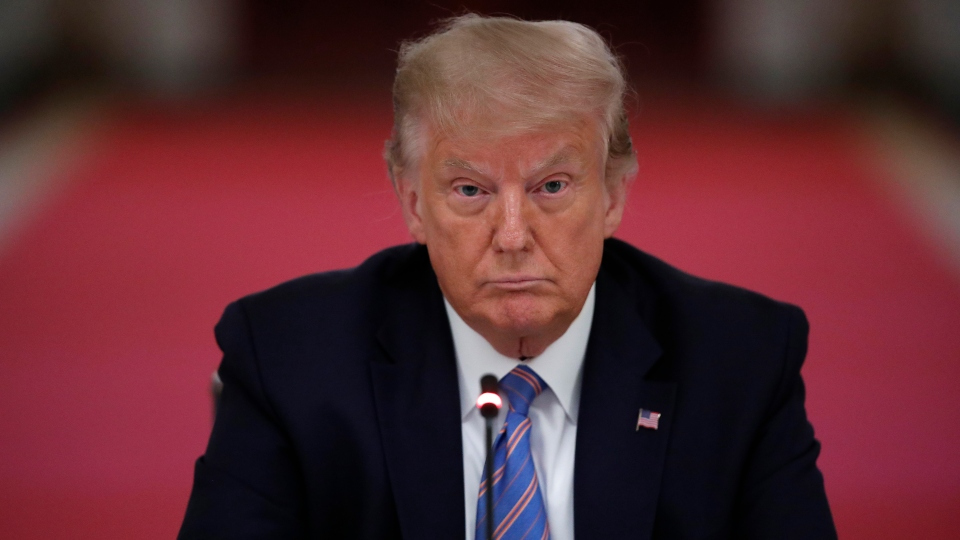 Trump threatened to cut off funding to schools if they do not open in the fall. Said Trump: “In Germany, Denmark, Norway, Sweden and many other countries, SCHOOLS ARE OPEN WITH NO PROBLEMS. The Dems think it would be bad for them politically if U.S. schools open before the November Election, but is important for the children & families. May cut off funding if not open!”

“Trump and senior administration officials made a concerted effort Wednesday to downplay recommendations of their own health experts as they ramped up pressure on states to reopen their schools, characterizing the move as key to the nation’s recovery,” the Washington Post reports.

As First Read points out, Trump “appears to be making the same mistake with schools that he did when he called for the U.S. economy to reopen last spring.”

There simply is no path to a vibrant economy without getting the virus under control. And the same is true with reopening the schools.

Trump rebuked Dr. Anthony Fauci’s blunt assessment of the US’ coronavirus response, claiming that the country is “in a good place” even as new cases surge, CNN reports.

Said Trump: “Well, I think we are in a good place. I disagree with him… Dr. Fauci said don’t wear masks and now he says wear them. And he said numerous things. Don’t close off China. Don’t ban China. I did it anyway. I didn’t listen to my experts and I banned China. We would have been in much worse shape.”

On Twitter, Trump falsely claimed the coronavirus death rate is “down tenfold.”

The Supreme Court ruled that the Trump administration can weaken the contraceptive mandate in the Affordable Care Act for private employers with religious or moral objections.

The court announced that today will be the last day for opinions this session, which means we should get the Court’s opinion in the Trump Tax Return case.

Lt. Col Alexander Vindman, a key witness in President Trump’s impeachment inquiry, is retiring from the US Army after more than 21 years of military service, after he determined that his future “will forever be limited” due to political retaliation, CNN reports.

His attorney says Vindman has endured a “campaign of bullying, intimidation, and retaliation” spearheaded by Trump following his testimony in the impeachment probe last year.

Just Security: “Why would the Russian government think it could get away with paying bounties to the Taliban to kill American soldiers? One answer to that question may be the extraordinary response that Moscow received when the Trump administration learned of a precursor to the bounty operation…”

“First, President Trump decided not to confront Putin about supplying arms to the terrorist group. Second, during the very times in which U.S. military officials publicly raised concerns about the program’s threat to US forces, Trump undercut them. He embraced Putin, overtly and repeatedly, including at the historic summit in Helsinki.”

“Third, behind the scenes, Trump directed the CIA to share intelligence information on counterterrorism with the Kremlin despite no discernible reward, former intelligence officials who served in the Trump administration told Just Security.”

“Chief Justice John Roberts suffered a fall at a Maryland country club last month that required an overnight stay in the hospital,” the Washington Post reports.

“The 65-year-old chief justice was taken by ambulance to a hospital after the June 21 incident at the Chevy Chase Club, which was serious enough to require sutures. He stayed at the hospital overnight for observation and was released the next morning.”

“Ever since the coronavirus emerged in Europe, Sweden has captured international attention by conducting an unorthodox, open-air experiment. It has allowed the world to examine what happens in a pandemic when a government allows life to carry on largely unhindered,” the New York Times reports.

“This is what has happened: Not only have thousands more people died than in neighboring countries that imposed lockdowns, but Sweden’s economy has fared little better.”

David Leonhardt: “There is no country in the world where confirmed coronavirus cases are growing as rapidly as they are in Arizona, Florida or South Carolina. The Sun Belt has become the global virus capital.”

“The only countries with outbreaks as severe as those across the Sunbelt are Bahrain, Oman and Qatar — three Middle Eastern countries with large numbers of low-wage migrant workers who are not citizens. These workers often live in cramped quarters, with subpar social services, and many have contracted the virus.”

Dr. Anthony Fauci, the nation’s top infectious disease expert, warned on Monday that the country was still “knee-deep in the first wave” of the pandemic, saying that the more than 50,000 new cases a day recorded several times in the past week were “a serious situation that we have to address immediately,” the New York Times reports.

Playbook: “The Trump administration has opened an internal investigation to try to uncover who leaked intelligence about Russians paying the Taliban bounties to kill American soldiers. The administration maintains the story is overcooked and the leaks cherry-picked despite a steady stream of follow-ups from media outlets across the globe.”

“The administration has interviewed people with access to the intelligence, and believes it has narrowed down the universe of suspects to fewer than 10 people.”

“The administration has said it would search for leakers in its ranks on many occasions. Notably, they vowed to find out who wrote an anonymous op-ed in the NYT almost two years ago. They said they’d find who leaked the president’s calendars in February 2019. Most of these probes fizzled out or faded away.”

“Sen. Lindsey Graham (R-SC) has publicly opposed President Trump five times in the past few weeks — including a new rebuke Monday — an unusual torrent of dissent from one of the president’s top allies in Washington just months before the South Carolina Republican faces a tough reelection challenge,” the Columbia State reports.

David Wasserman: “When even Lindsey Graham starts repudiating Trump, you know it’s… oh wait, he just made it through his primary and was willing to say anything to survive all along because he doesn’t have a life outside of being a senator. This isn’t hard, folks.”

Said Pompeo: “With respect to Chinese apps on people’s cell phones, I can assure you the United States will get this one right too… I don’t want to get out in front of the President Trump, but it’s something we’re looking at.”

“Harvard and the Massachusetts Institute of Technology sued the Trump administration on Wednesday over its new policy barring international students from coming to or remaining in the U.S. if their classes are taught entirely online,” the Wall Street Journal reports.

Politico: “As Trump prepared to sign his administration’s ethics pledge in 2017, he joked that ‘most of the people standing behind me will not be able to go to work’ on K Street. Yet one of the people standing behind him — then-White House chief of staff Reince Priebus — is now the chairman of a lobbying firm that’s hired several other former White House aides, two of whom have registered as lobbyists.”

“Rick Dearborn, who served as a White House deputy chief of staff, is now a lobbyist for clients such as MetLife and Verizon. Chiefs of staff from Vice President Mike Pence’s office, the State Department, the Treasury Department, the Health and Human Services Department, the Transportation Department, the Office of the U.S. Trade Representative, and the Environmental Protection Agency have all been absorbed by the influence industry, though not all of them have registered as lobbyists.”

“Facebook took down a network of more than 100 pages and accounts on Wednesday it said was affiliated with convicted felon and former Republican operative Roger Stone for ‘coordinated inauthentic behavior’ dating back to around the 2016 election and its aftermath,” the Washington Post reports.

“Facebook officials said Stone, a longtime friend of President Trump and adviser to his first presidential campaign, used fake accounts and other deceptive measures to manipulate public debate. He also, in at least a small number of occasions, drew attention to posts made by anti-secrecy group WikiLeaks.”

Gabriel Sherman: “At a moment when he needs to calm restive Republicans, Trump may antagonize them further by commuting Roger Stone’s 40-month sentence. According to sources, Trump has told people he wants to commute Stone’s sentence before Stone reports to prison on July 14. Rumors swirled over the weekend that Trump would announce it on Sunday night.”

“Sources say the West Wing is at war over a possible Stone commutation. White House counsel Pat Cipollone is against the move, and even Attorney General Bill Barr is opposed… People close to Trump fear he won’t listen.”

Said one Republican close to the White House: “You can’t underestimate how hard it is to get information through to him. When you talk to him, he just talks at you. He doesn’t like to read memos, so there’s not really a way to get through to him. Everyone agrees.”