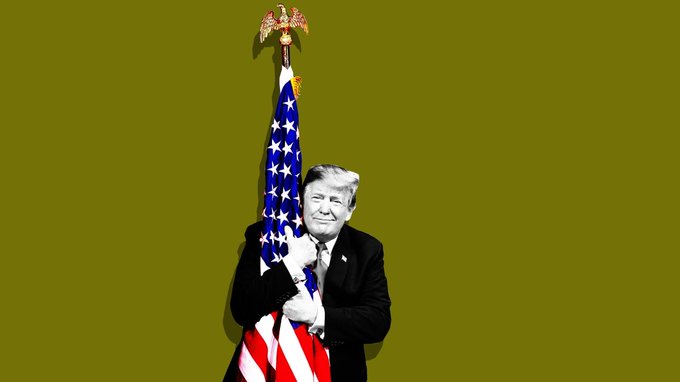 In addition, Georgia has joined Arizona, North Carolina and Florida in the Toss Up column, although, at this point, Biden would be slightly favored to win at least Arizona and Florida.

“A potential new addition to President Trump’s future rallies: statues,” ABC News reports. “The idea has been discussed by White House and Trump campaign aides, but no final decision has been made, sources familiar with the planning told ABC News. It’s also not clear who exactly the statues would resemble, but sources say one idea was for ‘America’s Founding Fathers.’”

Sens. Mitt Romney (R-UT), Susan Collins (R-ME) and Lisa Murkowski (R-AK) will not attend the GOP convention next month in Florida, aides for the senators confirmed to The Hill. Sens. Chuck Grassley (R-IA) and Lamar Alexander (R-TN) have also said they won’t attend.

Rolling Stone spoke to nine GOP campaign consultants about the Republicans chances in November. A sampling of comments:

Most importantly, the GOP is backed into a corner: “But in 2006, Republican candidates could strategically distance themselves from an unpopular president without facing a mutiny within the ranks. That won’t work in 2020, as — though Trump’s numbers are plummeting with some demos — they are solidifying or improving among his core support demographic. Which makes running afoul of Trump fatal in the eyes of these strategists.”

This is interesting from the new Monmouth poll: Just 18% of voters think “defund the police” means “get rid of the police,” while 77% believe it means a call to action to change the way police operate.

As Dave Weigel notes, the latest wave of Trump campaign ads portrays “Biden’s America” as one without any police.

A new NBC News/Survey Monkey poll finds Americans have significantly more confidence in their governors than in President Trump when it comes to handling the coronavirus.

Key findings: “Forty-three percent of respondents approve of Trump’s handling of the pandemic, while 55% disapprove. That’s compared to 60% of Americans who say they approve of how their governors are handling the response and just 37% who said they disapprove.”

A new Financial Times poll finds Americans have become more pessimistic about the prospects for a quick pandemic recovery, especially in the states of the US south and west where coronavirus cases have spiked.

Almost half of likely voters, some 49%, said they believed the outbreak would get worse in their community over the next month, a sharp increase from the 35% who said the pandemic would worsen when asked a month ago. Only 24% said they believed it would improve.

“Kansas Democrat Barbara Bollier raised more in a three-month period than any candidate in Kansas history for federal, state or local office,” the Kansas City Star reports. “Bollier’s U.S. Senate campaign took $3.7 million in contributions from April through June, a quarterly record in the state.”

Amy Walter: “This election is looking more like a Democratic tsunami than simply a Blue wave… Republican strategists we’ve spoken with this week think Trump is close to the point of no return. A couple of others wondered if Trump had reached his ‘Katrina’ moment: a permanent loss of trust and faith of the majority of voters.”

“In talking with strategists on both sides this last week, it’s also clear that Trump is dragging Republican congressional candidates with him as well.”

“While President Trump has continuously railed against voting by mail, a Republican National Committee robocall in April voiced by his daughter-in-law Lara Trump said voting by mail could be done ‘safely and securely,’” CNN reports.

Jonathan Bernstein: “By questioning the validity of mail-in ballots, the president could be suppressing Republican votes.”

Thomas Friedman: “Biden should declare that he will take part in a debate only if Trump releases his tax returns for 2016 through 2018. Biden has already done so, and they are on his website. Trump must, too. No more gifting Trump something he can attack while hiding his own questionable finances.”

“And second, Biden should insist that a real-time fact-checking team approved by both candidates be hired by the nonpartisan Commission on Presidential Debates — and that 10 minutes before the scheduled conclusion of the debate this team report on any misleading statements, phony numbers or outright lies either candidate had uttered. That way no one in that massive television audience can go away easily misled.”

“The Trump and Biden presidential campaigns now see the coronavirus response as the preeminent force shaping the results of November’s election, prompting both camps to try to refocus their campaigns more heavily on the pandemic,” the Washington Post reports.

“Advisers to Joe Biden see the covid-19 crisis as perhaps the clearest way yet to contrast the former vice president with President Trump, using the stumbling response and renewed surge in cases as ways to paint Trump as uninformed, incapable of empathy and concerned only about his own political standing.”

“Trump’s advisers, by contrast, are seeking ways to reframe his response to the coronavirus — even as the president himself largely seeks to avoid the topic because he views it as a political loser.”

New Hampshire Gov. Chris Sununu (R) assured reporters that President Trump’s upcoming rally in the state could be pulled off safely and without a mandatory mask order, even as he was unlikely to attend himself, CNN reports.

“I’m going to go and greet the president as the governor. I will not be in the crowd of thousands of people, I’m not going to put myself in the middle of a crowd of thousands of people, if that’s your question specifically. I try to — unfortunately, you know, I have to be extra cautious as the governor, I try to be extra cautious for myself, my family.” — New Hampshire Gov. Chris Sununu (R), talking on CNN about President Trump’s rally this Weekend.

Forbes: “Kanye West’s Fourth of July declaration, via Tweet, that he was running for president lit the internet on fire, even as pundits were trying to discern how serious he was. Over the course of four rambling hours of interviews on Tuesday, the billionaire rapper turned sneaker mogul revealed: That he’s running for president in 2020 under a new banner — the Birthday Party — with guidance from Elon Musk and an obscure vice presidential candidate he’s already chosen.”

He has not yet filed any paperwork for a run.

CNN: “In 12 races that will determine the next Senate majority, Democrats have spent roughly $30 million more on the airwaves than their Republican counterparts,”

“In total, Democrats — including campaigns and outside groups — have spent $109 million on television, radio and digital advertisements, compared with $79 million for Republicans since the beginning of the election cycle last year, the records show.”

“House Minority Whip Steve Scalise’s PAC is inviting lobbyists to attend a four-day ‘Summer Meeting’ at Disney World’s Polynesian Village in Florida, all but daring donors to swallow their concern about coronavirus and contribute $10,000 to his leadership PAC,” Axios reports.