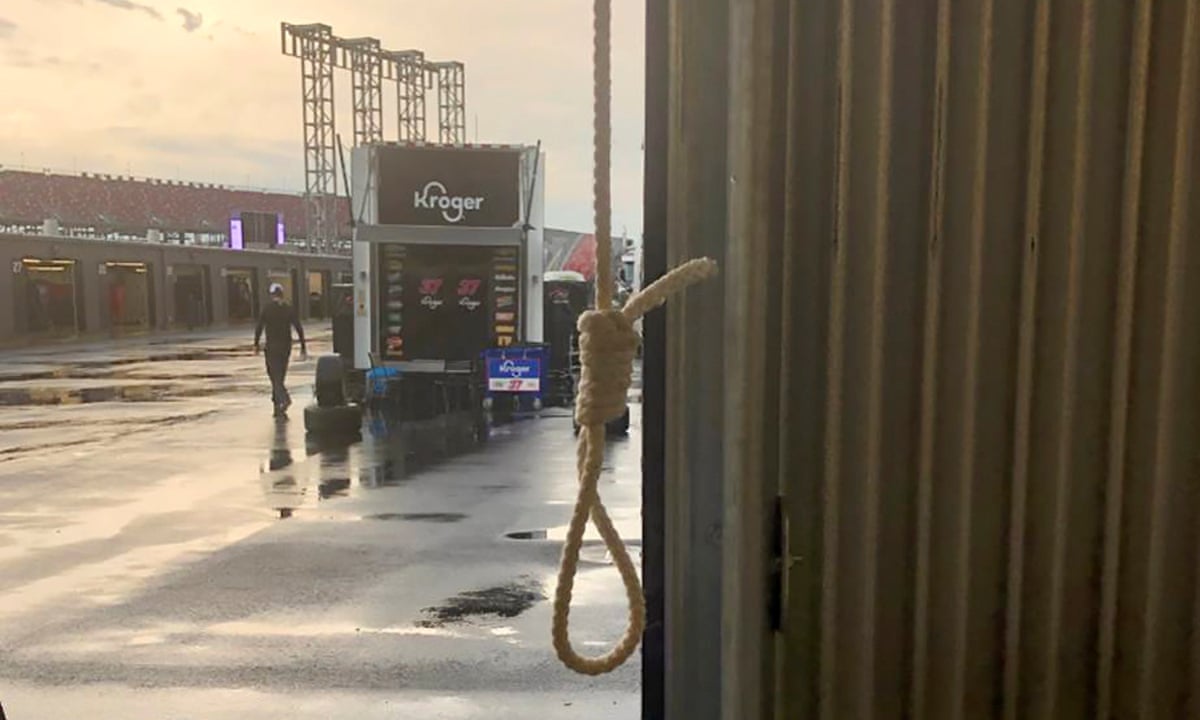 President Trump decided to let his racist flag fly openly and indisputably on Twitter: “Has Bubba Wallace apologized to all of those great NASCAR drivers and officials who came to his aid, stood by his side, and were willing to sacrifice everything for him, only to find out that the whole thing was just another HOAX? That and Flag decision has caused lowest ratings EVER!”

It wasn’t a hoax. It was a noose. What the FBI said was that they could not find any evidence that it was intentionally placed there as a hate crime. What they did find is that Wallace’s garage was the only garage onsite that had this type of rope hanging from the garage door was found. So, just because a crime cannot be proven doesn’t mean the noose did not exist. It did exist. Someone put it there to intimidate the only black driver in NASCAR.

Sen. Lindsey Graham (R-SC) pushed back on President Trump’s tweet suggesting NASCAR driver Bubba Wallace should apologize after the FBI determined last month that he was not a target of a hate crime, Axios reports.

Said Graham: “You saw the best in NASCAR. When there was a chance that it was a threat against Bubba Wallace, the drivers all rallied to Bubba’s side… I would be looking to celebrate that kind of attitude more than being worried about it being a hoax.”

NASCAR driver Tyler Reddick tweeted “We don’t need an apology. We did what was right and we will do just fine without your [Trump’s] support.”

President Trump on Twitter: “They name teams out of STRENGTH, not weakness, but now the Washington Redskins & Cleveland Indians, two fabled sports franchises, look like they are going to be changing their names in order to be politically correct. Indians, like Elizabeth Warren, must be very angry right now!”

Senate Majority Leader Mitch McConnell (R-KY) said that he believes there will be a fifth coronavirus relief bill, as the country sees an uptick in the number of cases, The Hill reports.

Said McConnell: “We will be taking a look at — in the Senate in a couple of weeks — another package based on the conditions that we confront today.”

Playbook: “Washington is about to begin a four-week sprint that will include the House Democratic leadership and the Senate GOP leadership wrestling over another coronavirus relief package. Republicans have laid their marker — Senate Majority Leader Mitch McConnell has said the next package needs to protect kids, protect jobs and reform liability laws so entities can’t get sued. Democrats have pushed for state and local government relief, additional unemployment insurance and direct payments and bolstering testing.

“Time is short, of course, and this will go down to the wire. Both sides agree that a package will get passed by the end of the month. With McConnell saying that liability reform is his red line, the question becomes: What does he have to give up to Speaker Nancy Pelosi and Senate Minority Leader Chuck Schumer to get it?

“President Trump and the White House are still making noises about a payroll tax cut — their only idea, it seems. Keep your eyes on chief of staff Mark Meadows. We expect he — not Treasury Secretary Steven Mnuchin — will be the chief negotiator this time around.”

The Supreme Court ruled that states can penalize faithless electors, the members of the Electoral College who do not support the winner of their state’s popular vote in a presidential election.

The decision was unanimous.

Axios: “The 2016 presidential election saw 10 electors vote for someone other than their state’s chosen candidate — highlighting how faithless electors could have the potential to swing an election.”

“The Supreme Court is taking an unusually long time to complete its term this year, with decisions in eight cases still under wraps days after the justices would have typically cleared out its docket for the season,” CNNreports.

Chris Whipple: “Another question may be as important: How does Trump absorb information? For decades, the president’s daily briefs have sounded early warnings on everything from enemy troop movements to pandemics to terrorist attacks. Yet under Trump, the president’s intelligence briefings have almost completely broken down. His oral briefings, given daily to most presidents, now take place as rarely as once or twice a week. These sessions often turn into monologues in which the president spitballs woolly conspiracy theories from Breitbart, Fox News and hangers-on at Mar-a-Lago, say intelligence officials who are familiar with his briefings. Convinced that the intelligence community is a ‘deep state,’ honeycombed with traitors, the president rarely believes anything the CIA tells him.”

“In short, Trump is unbriefable.”

E.J. Dionne: “Trump’s vile speeches at Mount Rushmore on Friday and at the White House on the Fourth of July signal that he sees one and only one possible path to victory: He will tear an already riven nation to pieces.”

Said Cuomo: “He wants to deny the COVID virus. He has from day one. ‘Well it’s just like the flu. Well it’s going to be gone by Easter. It’s going to get warm and disappear like a miracle.’ He’s said all of things, and none of them were true.”

Amy Cooper, the white woman who called the police and falsely accused a Black man of threatening her life in Central Park, will face misdemeanor charges, the New York Times reports.

“The nonprofit foundation — which advocates restraint in government spending and says it works to educate taxpayers on ‘costly government programs’ — took a loan between $150,000 and $350,000 from the Paycheck Protection Program.”

The Ayn Rand Institute received a Paycheck Protection Program loan of between $350K and $1 million, the Wall Street Journal reports.

“South Dakota Gov. Kristi Noem (R) accompanied President Trump aboard Air Force One despite having had close contact with Trump’s son’s girlfriend, who had tested positive for the coronavirus,” the AP reports.

“Trump has been in a position all along to encounter a virus that spreads from people who don’t feel sick, such as Noem, who had interacted closely at a campaign fundraiser with Donald Trump Jr.’s girlfriend, Kimberly Guilfoyle, who turned out to be sick. Noem didn’t wear a mask on the plane and chatted with the president as the flight returned to Washington, D.C.”

“One photo on social media showed Noem and Guilfoyle, who is also a Trump campaign staff member, hugging.”

The Trump administration announced that international students who attend college in the United States on visas will be barred from staying in the country if their school’s classes are entirely online during the fall semester, Politico reports.

“Many colleges will be left in a tough spot by the policy: Reopen their schools to in-person learning despite rising numbers of coronavirus infections or face losing international students and their tuition. Some international students already had left the U.S. when the pandemic broke out and they and their colleges were hoping they could return in the fall, but most are thought to have remained here.”

“Some European nations are closing in on a milestone that to the U.S. seems distant: virtually stopping the new coronavirus from spreading within their territories,” the Wall Street Journal reports.

“Echoing the achievement of Asia-Pacific countries such as New Zealand, Vietnam and Taiwan, a handful of places in Europe are reporting only a smattering of new daily infections. Their success in containing the pandemic has allowed them to reopen their economies earlier, at a faster clip and with greater confidence than the stop-start efforts of U.S. states and hard-hit neighbors such as the U.K.”

“The lobbyists identified Monday by the watchdog group Public Citizen either worked in the Trump executive branch, served on his campaign, were part of the committee that raised money for inaugural festivities or were part of his presidential transition. Many are donors to Trump’s campaigns, and some are prolific fundraisers for his reelection.”

Dan Balz: “President Trump, with two speeches in two days, has turned the Fourth of July from a joyful and unifying patriotic celebration of America’s founding values into a partisan political event. The damage could outlast his presidency.”

“From near the base of Mount Rushmore on Friday night and from the South Lawn of the White House on Saturday night, Trump tried to write himself into the history of America as an implacable wartime president. His enemy, however, is not the Nazis of the 20th century or terrorists of the 21st century. Instead, it appears to be those in America who disagree with him — a caricatured blue America.”

“In the days after George Floyd’s killing in police custody in Minneapolis last month, as massive protests against police brutality spread across Texas and other states, conservative power broker Steve Hotze of Houston called Gov. Greg Abbott’s chief of staff to pass along a message,” the Texas Tribune reports.

Said Hotze: “I want you to give a message to the governor. I want to make sure that he has National Guard down here and they have the order to shoot to kill if any of these son-of-a-bitch people start rioting like they have in Dallas, start tearing down businesses — shoot to kill the son of a bitches. That’s the only way you restore order. Kill ’em. Thank you.”