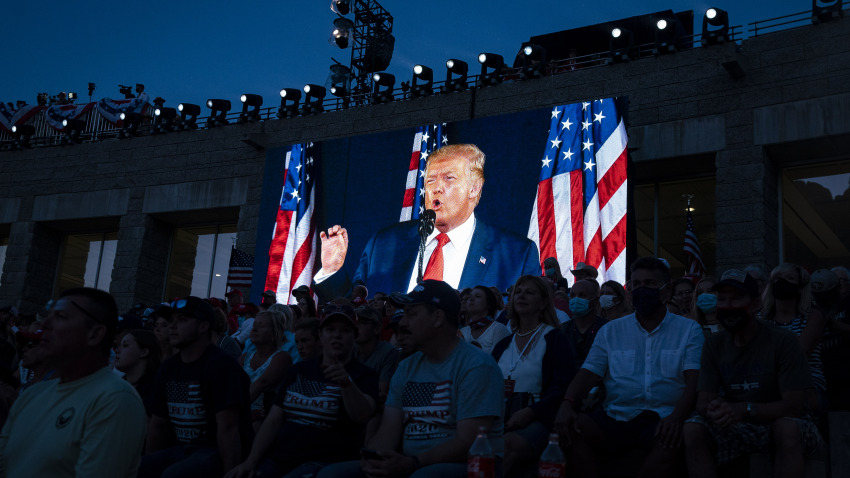 “In his inaugural address, President Trump sketched the picture of ‘American carnage’ — a nation ransacked by marauders from abroad who breached U.S. borders in pursuit of jobs and crime, lured its companies offshore and bogged down its military in faraway conflicts,” the Washington Post reports.

“Nearly 3½ years later, in the president’s telling, the carnage is still underway but this time the enemy is closer to home — other Americans whose racial identity and cultural beliefs are toppling the nation’s heritage and founding ideals.”

New York Times: “He signaled even more clearly that he would exploit race and cultural flash points to stoke fear among his base of white supporters in an effort to win re-election. As he has done in the past, he resorted to exaggerated, apocalyptic language in broadly tarring the nationwide protests against entrenched racism and police brutality.”

Joe Biden “finds himself in landslide territory without having had to do very much to get there… Mr Trump’s flailing has made a Democratic Senate majority possible,” The Economist reports.

“That opens up the chances of a highly productive presidency which once seemed inconceivable. Before COVID-19 and widespread social unrest, Mr Biden’s candidacy was about restoration — the idea that he could return America and the world to the prelapsarian days of 2016. It transpires that he could have the opportunity to do something big instead.”

“To make lasting change through the federal government you need to win the Senate. And that cannot be done with a candidate at the top of the ticket who frightens the voters… Because he comes across as the grandfather he is, he is viewed with suspicion on the left. Yet that is precisely what makes him reassuring … to voters in states like Montana and Georgia where Democrats must win to gain a majority in the Senate. It is Mr Biden’s caution that opens up the possibility of more change than a real radical would.”

Associated Press: “With President Trump confronted by skyrocketing joblessness and the coronavirus pandemic as he campaigns for reelection against Democrat Joe Biden, members of his Cabinet are busy making time in pivotal states. They are carrying a message to voters about what the Trump administration is doing for them. At the same time, there are questions about whether these agency heads are running afoul of a law meant to bar overt campaigning by federal officials on the taxpayer tab.”

“President Trump’s unyielding push to preserve Confederate symbols and the legacy of white domination, crystallized by his harsh denunciation of the racial justice movement Friday night at Mount Rushmore, has unnerved Republicans who have long enabled him but now fear losing power and forever associating their party with his racial animus,” the Washington Post reports.

“Although amplifying racism and stoking culture wars have been mainstays of Trump’s public identity for decades, they have been particularly pronounced this summer as the president has reacted to the national reckoning over systemic discrimination by seeking to weaponize the anger and resentment of some white Americans for his own political gain.”

“Trump needs — or thinks he needs — fear of ‘the other’ to motivate his base and create enthusiasm. Right now, people are fearful of Covid-19, but that is inconvenient for Trump, so he is trying to kick up fear about something he thinks will benefit his re-election: angry mobs of leftists tearing down American history.”

A crowd of shouting protesters yanked down the Christopher Columbus statue near Little Italy, dragged it to the edge of Baltimore’s Inner Harbor and rolled it with a splash into the water as fireworks went off around the city on the night of the Fourth of July, the Baltimore Sun reports.

“Forget the luxury-suite studios soaring above the convention stage. Or the morning-show stars flown in for an on-scene dispatch. Or the armies of television crews and correspondents trawling the arena floor for rebellious delegates,” the New York Times reports.

“This year’s political conventions — a quintessential, quadrennial TV spectacle — are rapidly shrinking in the face of the coronavirus. And so are the coverage plans of the news networks, who are expecting the usual media circus to resemble something closer to a county fair.”

Politico: “Publicly, the Trump campaign asserts their candidate is still competitive in each of the 30 states he carried in 2016. They say presumptive Democratic nominee Joe Biden faces an enthusiasm deficit among his party’s likeliest voters and that public polling — much of which has shown the president trailing far behind Biden nationally, and more narrowly in battleground states — does not jibe with their own internal numbers.”

“But privately, campaign aides, senior administration officials and GOP donors have begun to acknowledge what they call a more plausible scenario: a pair of losses in the Rust Belt, most likely Michigan and Wisconsin. That would mean the president has to win some proven Trump-averse states to crack the 270-vote threshold needed to clinch a second term.”

“Gone are the days of forecasting a landslide victory, said one person close to the Trump campaign. The president’s team is now recasting its expectations to identify not where Trump can win more, but how he can lose less.”

Financial Times: “The US Navy has sent two aircraft carrier groups into the South China Sea for the first time since 2014 as China conducts exercises the contested waters. The USS Nimitz and the USS Ronald Reagan were conducting dual carrier operations and exercises in the South China Sea to support a free and open Indo-Pacific, the US Navy said on Saturday.”

“Perhaps, it’s not surprising then that when one party puts out a lot more internal polls than normal, it is good for their side. Parties tend to release good polling when they have it. Since 2004, there has been a near perfect correlation (+0.96 on a scale from -1 to +1) between the share of partisan polls released by the Democrats and the November results.”

“Right now, Democrats and liberal groups are releasing a lot more surveys than Republicans, which suggests the public polling showing Democrats doing well is backed up by what the parties are seeing in their own numbers.”

Joe Biden and Donald Trump “combined with the Democratic and Republican Parties to raise well over a quarter-billion dollars in June, setting new high-water marks for both men in 2020 and obliterating June fund-raising records from previous presidential cycles,” the New York Times reports.

New York Times: “Like New York City in March, the Houston hospitals are experiencing a steep rise in caseloads that is filling their beds, stretching their staffing, creating a backlog in testing and limiting the availability of other medical services. Attempts to buy more supplies — including certain protective gear, vital-sign monitors and testing components — are frustrated by weeks of delays, according to hospital leaders.”

The Washington Redskins football team is conducting a “thorough review” of its name, an apparent break from the NFL franchise’s longtime resistance to consider such a move, NPR reports.

A short time later, Major League Baseball’s Cleveland Indians said it would consider the “best path forward with regard to our team name.”