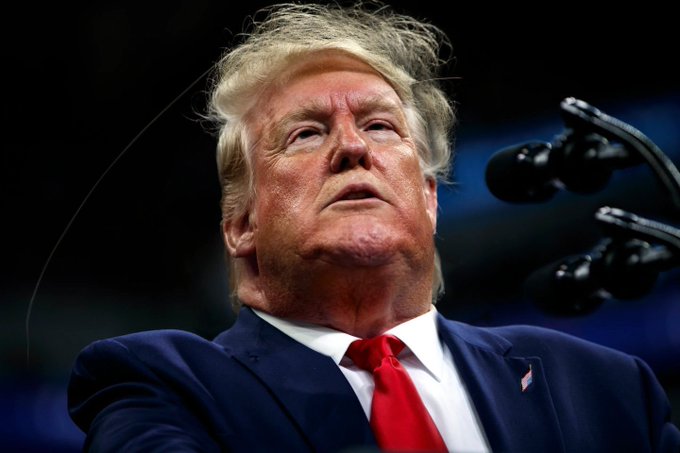 President Trump issued a fiery condemnation of a “left-wing cultural revolution” he said is mounting a “radical assault” on American democracy in a speech steeped in historical hyperbole delivered against the stunning backdrop of Mount Rushmore on the observed Fourth of July,” Politico reports.

Said Trump: “Angry mobs are trying to tear down statues of our founders, deface our most sacred memorials and unleash a wave of violent crime in our cities. They think the American people are weak and soft and submissive.”

New York Times: “Organizers are trying to assuage vexed Republicans who collectively gave millions of dollars for a Charlotte event that has mostly been scrapped. The host committee there has spent virtually all of the $38 million it raised before the convention was moved, leaving almost nothing to return to donors, or to pass on to the new host city.”

“In Jacksonville, fund-raisers are describing the process as the most difficult they have ever confronted: Florida has been setting daily records for new virus cases, freezing money as donors wait and worry about the safety risks of the pandemic.”

Guilfoyle, who is Donald Trump Jr.’s girlfriend and a top Trump campaign official, tested positive in South Dakota before she was set to attend the President’s event at Mount Rushmore.

“A memo produced in recent days by the office of the nation’s top intelligence official acknowledged that the C.I.A. and top counterterrorism officials have assessed that Russia appears to have offered bounties to kill American and coalition troops in Afghanistan, but emphasized uncertainties and gaps in evidence, according to three officials,” the New York Times reports.

“The memo is said to contain no new information, and both its timing and its stressing of doubts suggested that it was intended to bolster the Trump administration’s attempts to justify its inaction on the months-old assessment.”

A new Yahoo News/YouGov Poll reveals that while 54% of Americans believe that America was a “shining city on a hill” when Ronald Reagan used that phrase in his final speech as president, 62% of Americans now say the country is no longer a model for the rest of the world.

Michelle Goldberg: “A lot of Republicans are acting puzzled about Donald Trump’s re-election pitch. ‘He has no message,’ one Republican source told Reuters. “He needs to articulate why he wants a second term,” said another. Some have expressed hope that Trump would find a way to become less polarizing, as if polarization were not the raison d’être of his presidency.”

“It’s hard to know if Republicans like this are truly naïve or if they’re just pretending so they don’t have to admit what a foul enterprise they’re part of. Because Trump does indeed have a re-election message, a stark and obvious one. It is ‘white power.’”

“The recent Black Lives Matter protests peaked on June 6, when half a million people turned out in nearly 550 places across the United States. That was a single day in more than a month of protests that still continue to today,” the New York Times reports.

“Four recent polls — including one released this week by Civis Analytics, a Democratic data firm — suggest that about 15 million to 26 million people in the United States have participated in demonstrations over the death of George Floyd and others in recent weeks.”

“These figures would make the recent protests the largest movement in the country’s history.”

“Mary Trump, whose pending tell-all memoir about her uncle President Trump has incited a court fight on the eve of publication, spoke out for the first time publicly about the battle, saying that her book has ‘deep national relevance’ and that the legal contract the family has sought to use this month to stop its release was based on fraud,” the New York Timesreports.

“The Republican Party of Texas will hold their state convention in-person with an expected attendance in the thousands, as the state is seeing record numbers of new daily coronavirus cases and increased hospitalizations,” CNN reports.

“The party’s executive committee on Thursday night passed a resolution, 40-20, in support of moving forward with its in-person convention in Houston.”

Politico: “When Donald Trump had dinner with Home Depot cofounder Bernie Marcus at the White House Saturday night, word of the get-together quickly reverberated across the president’s political sphere. The 91-year-old billionaire is a longtime backer of former White House chief strategist Steve Bannon, and Trump operatives were suspicious that a move was afoot to bring the smashmouth populist back into the fold.”

“Few seriously believe Bannon will return — while Trump has praised his recent TV appearances, there is still deep anger within the president’s inner circle over Bannon’s post-White House mocking of first daughter Ivanka Trump. But the post-meeting jitters illustrate how Trump’s political team is suddenly gripped by uncertainty: With the election just four months away and Trump conceding privately that he’s behind, his advisers have spent the past week racing to get on track.”