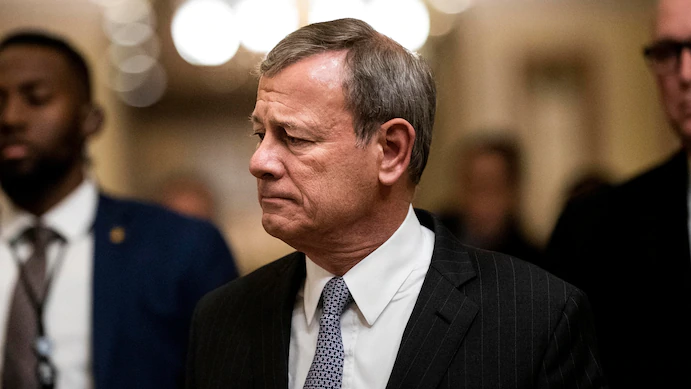 The Supreme Court struck down abortion restrictions in Louisiana in a 5-4 vote, “a sign that even if the court’s newly expanded conservative majority wants to chip away at abortion rights, it will likely do so incrementally,” Axios reports.

Chief Justice John Roberts said “respect for precedent compelled him to vote with the majority,” the New York Times reports.

“The case was the court’s first on abortion since President Trump’s appointments of two justices shifted the court to the right.”

The intelligence that assessed there was an effort by a Russian military intelligence unit to pay the Taliban to kill US soldiers was included in one of President Trump’s daily briefings on intelligence matters sometime in the spring, CNN reports.

Trump knew. And he continued to do whatever Putin wanted. He is a traitor to the nation.

Sen. Ben Sasse (R-NE) told The Hill that Congress needs to get to the bottom of what President Trump was told about Russia offering bounties to Taliban militants to kill coalition troops in Afghanistan, calling for a “proportional response” from the U.S.

Said Sasse: “I’ve been hearing from military families in Nebraska constantly for the last 36 hours and they’re livid. This is a story about the targeting of American men and women in uniform. This is about putting crosshairs on the backs of people who are fighting for our freedom. This is not about short-term politics.”

“In hundreds of highly classified phone calls with foreign heads of state, President Trump was so consistently unprepared for discussion of serious issues, so often outplayed in his conversations with powerful leaders… and so abusive to leaders of America’s principal allies, that the calls helped convince some senior US officials — including his former secretaries of state and defense, two national security advisers and his longest-serving chief of staff — that the President himself posed a danger to the national security of the United States,” CNN reports.

“The sources said there was little evidence that the President became more skillful or competent in his telephone conversations with most heads of state over time. Rather, he continued to believe that he could either charm, jawbone or bully almost any foreign leader into capitulating to his will, and often pursued goals more attuned to his own agenda than what many of his senior advisers considered the national interest.”

“The House’s select committee on the coronavirus crisis will not recognize members who do not wear a mask while in session, Chair James Clyburn (D-SC) told his Republican colleagues in a letter sent Monday,” Axios reports.

“The move comes after every Republican in the committee did not wear a mask at last Friday’s hearing, despite being warned to do so prior to the meeting.”

Rep. Ted Lieu (D-CA), and five other members of the House Judiciary Committee, unveiled a rule change Monday to formalize and expand Congress’ power of “inherent contempt” — its authority to unilaterally punish anyone who defies a subpoena for testimony or documents, Politico reports.

The Guardian: “More than 60% of respondents in Germany, France, Spain, Denmark and Portugal said they had lost trust in the United States as a global leader.”

“The House Monday passed the first significant expansion of the Affordable Care Act since its birth a decade ago, providing Democrats a high-wattage platform to castigate President Trump for his efforts to overturn the landmark law during a pandemic and an election year,” the Washington Post reports.

“The 234-179 vote, almost entirely along party lines, was a hollow exercise in terms of any chance the bill would become law and reshape federal health policy… Still, the vote was laden with political implications. Less than five months before presidential and congressional elections, it forced Republicans to go on the record about the ACA and showed anew the parties’ highly charged ideological differences on health care — an issue that consistently polls as a prime concern among U.S. voters.”

Jonathan Chait: “When a combination of Confederate nostalgists and outright white supremacists rallied in Charlottesville in 2017 to maintain a statue of Robert E. Lee, President Trump embraced their cause. His statement, which contained a shocking defense of Nazis, was so disgraceful that several members of his administration could not hide their humiliation.”

“And yet Trump has oddly decided to revisit the theme. He is not invoking the “very fine people on both sides,” but he is emphasizing his original defense of Confederate memorials. Trump is not only denouncing protesters who are pulling down various statues — some of them honoring anti-slavery icons — his supporters are claiming that he was right all along to defend the Lee statue.”

“Donald Trump courted controversy on Monday – and perhaps sought to deflect attention from reports about Russia placing bounties on US soldiers in Afghanistan – by retweeting news footage of a white couple in St Louis, Missouri who pointed guns at protesters marching for police reform,” The Guardian  reports.

President Trump on Twitter: “Can anyone believe that Princeton just dropped the name of Woodrow Wilson from their highly respected policy center. Now the Do Nothing Democrats want to take off the name John Wayne from an airport. Incredible stupidity!”

Both men are flaming racists. So of course, the racist Trump defends them.

“The Supreme Court will not take up a challenge to new federal death penalty protocols proposed by the Justice Department, which wants to resume executions as early as July for the first time since 2003,” the Washington Post reports.

“The court, without comment, declined Monday to take up the lawsuit filed by four death row inmates. As is customary, it gave no reason. Justices Ruth Bader Ginsburg and Sonia Sotomayor said they would have accepted the case.”

Eric Trump predicted to the Wall Street Journal that “after his father leaves office, the Trump Organization will launch a major expansion that will in part focus on luxury hotels abroad.”

“The company has previously eyed projects in the Middle East and China, a country the president has frequently criticized on trade, Covid-19 and other issues.”

Jeffrey Toobin: “According to the Administration, Mueller and his team displayed an unseemly eagerness to uncover crimes that never existed. In fact, the opposite is true. Mueller had an abundance of legitimate targets to investigate, and his failures emerged from an excess of caution, not of zeal.”

“Especially when it came to Trump, Mueller avoided confrontations that he should have welcomed. He never issued a grand-jury subpoena for the President’s testimony, and even though his office built a compelling case for Trump’s having committed obstruction of justice, Mueller came up with reasons not to say so in his report. In light of this, Trump shouldn’t be denouncing Mueller—he should be thanking him.”

Iran has issued an arrest warrant and asked Interpol for help in detaining President Trump and dozens of others it believes carried out the drone strike that killed a top Iranian general in Baghdad, Al Jazeera reports.

David Frum: “COVID-19 infections peaked on April 24, or so Americans assumed. State health authorities reported 36,738 new cases that day, a record. By mid-May, the United States had reduced that rate of infection by nearly half, to 17,618 on May 11. The accomplishment had come at a tremendous cost: the lockdown of much of the national economy, Great Depression levels of unemployment, the shift to online schooling for millions of children, families denied final visits to dying loved ones. Still, these sacrifices had delivered the desired result. Had that progress continued, the American people—and the American economy—could have likely foreseen a further decline in cases and perhaps a near end to the pandemic, even before a vaccine.”

“But that’s not what happened. On June 24, the number of infections surpassed the April 24 peak. On June 25, the number surpassed that of June 24. On June 26, the country suffered almost 46,000 new infections—nearly 10,000 more in one day than on the worst day in April. All of the sacrifices of the past weeks have been thrown away.”

“The first coronavirus spike in late April can be blamed on President Trump’s negligence. The second spike in June is his own doing. This is Trump’s plague now.”

“The Chinese government is taking draconian measures to slash birth rates among Uighurs and other minorities as part of a sweeping campaign to curb its Muslim population, even as it encourages some of the country’s Han majority to have more children,” the AP reports.

“While individual women have spoken out before about forced birth control, the practice is far more widespread and systematic than previously known.”

New York Gov. Andrew Cuomo (D) said New York City might have to delay going into its third phase of reopening — the start of reopening indoor dining at restaurant — because of reports that people are not following social distancing guidelines.

Kansas City Mayor Quinton Lucas (D) posted a message he received to his Facebook page using a racial slur against him and saying he should “hang from a tree” after he required the wearing of masks in public, The Hill reports.