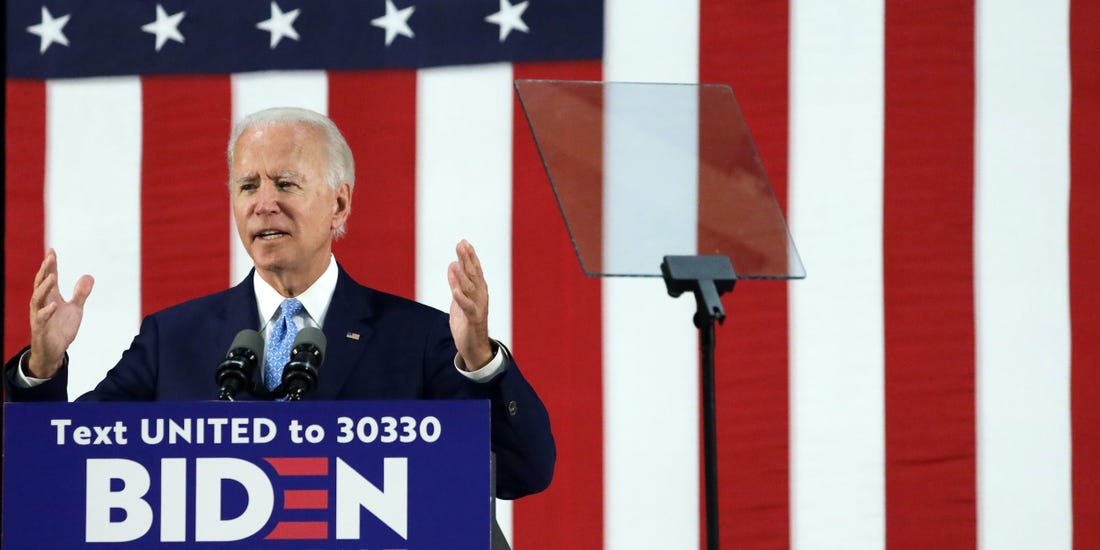 The backdrop: “Anger and fear are widespread. Majorities of Democrats and Republicans say they feel both sentiments when thinking about the country, though these feelings are more prevalent among Democrats. And just 17% of Americans – including 25% of Republicans and Republican-leaning independents and 10% of Democrats and Democratic leaners – say they feel proud when thinking about the state of the country.”

A new Pew Research national poll has this stunning finding: The percentage of Republicans who say they’re satisfied with the direction of the country has dropped below 50% — all the way to 19%.

Philip Bump: “New data from the Pew Research Center bolsters the idea that Trump’s position in the polls is worsening as a function of what’s happening in the country. Specifically, it seems likely that the pandemic is pushing his approval ratings lower, which, in turn, is making his position in the presidential contest more precarious.”

Joe Biden’s presidential campaign demanded in a letter to Facebook that the company prevent misuse of its platform by President Trump to spread “hateful content” and misleading claims about mail-in voting ahead of the November election, the Washington Post reports.

President Trump’s campaign has scrapped plans to hold a rally in Alabama next weekend amid concerns about coronavirus infections rising, CNNreports.

“Trump was slated to travel to the state ahead of the Senate race between his former attorney general Jeff Sessions and the former Auburn University football coach Tommy Tuberville, but plans were called off as state officials voiced concerns about a mass gathering and campaign officials ultimately decided against it.”

Washington Post: “The recordings show that Biden, as he has previously said publicly, linked loan guarantees for Ukraine to the ouster of the country’s prosecutor general. The tapes do not provide evidence to back Giuliani’s long-standing accusation that Biden sought to have him fired to block an investigation of a gas company that had hired his son Hunter.”

“The authenticity of the audio files, which appear heavily edited, could not be verified. The Ukrainian government is investigating how they were obtained. Biden’s campaign has said they are part of an effort to concoct conspiracy theories to smear him. Poroshenko has gone further and called them fake.”

South Dakota Gov. Kristi Noem (R) said the thousands of people who attend the July 3 celebration for Independence Day at Mount Rushmore with President Trump will not be required to practice social distancing despite an increase in coronavirus cases across the country, NBC Newsreports.

Said Noem: “We will have a large event at July 3rd. We told those folks that have concerns that they can stay home, but those who want to come and join us, we’ll be giving out free face masks, if they choose to wear one. But we will not be social distancing.”

Former national security adviser Susan Rice told MSNBC that she is “humbled and honored” to be considered as a possible running mate for former Vice President Joe Biden.

“President Trump’s campaign has booked more than $95 million in broadcast television time this fall, as the re-election has been pushed onto the defensive in recent months in many states key to the president’s success in November,” NBC News reports.

“So far, the Trump campaign has reserved the most for Florida, where it’s booked more than $32 million. The plurality of that spending is planned for the Tampa area, with Orlando close behind.”

“The next-largest investment is in Ohio, a state Trump won by 8 points in 2016, but one where two recent polls from Quinnipiac University and Fox News found Biden leading.”

“Tom Steyer is turning loose the fundraising network he built as a 2020 presidential candidate to boost down-ballot Democrats this year,” Politicoreports.

“Besides continuing to fund NextGen America — a group he founded in 2013 that focuses primarily on engaging and turning out young voters — Steyer will deploy his extensive email list to raise money directly for candidates and engage volunteers, as well as personally host fundraisers and events that aides expect will consistently bring in six-figure hauls for congressional candidates.”

Jonathan Chait: “The ‘Sleepy Joe’ label was likewise derivative. It’s a default nickname Trump tends to use on generic white male Democrats, like Senators Bob Casey or Joe Donnelly. (Trump has spent years aiming a similar insult at NBC News host Chuck Todd.) Obviously, ‘Sleepy’ is a somewhat damning description for anybody who works in television. The harm it would pose to a politician is less clear. Moderate Democrats, especially ones running in red states, would actively desire to be seen as sedate and low-key.”

“And as the Trump era spirals further into chaos and endless rage, that image seems more and more comforting. It seems to have dawned on Trump only recently that his nickname for Biden was doing very little to reduce his opponent’s appeal.”VISIT WE

Wall Street Journal: “At a time when historic numbers of Americans are seeking jobless benefits amid coronavirus pandemic-induced lockdowns, the president has blamed Mr. Biden for thousands of job losses because of trade deals he backed in earlier decades. With national unrest over police brutality accelerating in Mr. Trump’s fourth year in office, the campaign has pointed to Mr. Biden for pushing criminal justice laws in the 1990s that it says have destroyed ‘millions of black lives.’ Mr. Biden’s campaign dismisses the strategy as a desperate one that won’t work.”

“Digital strategists said it was highly unusual to use a campaign staff member’s page to run ads.”

0 comments on “The Campaign Report – Biden holds onto big lead”