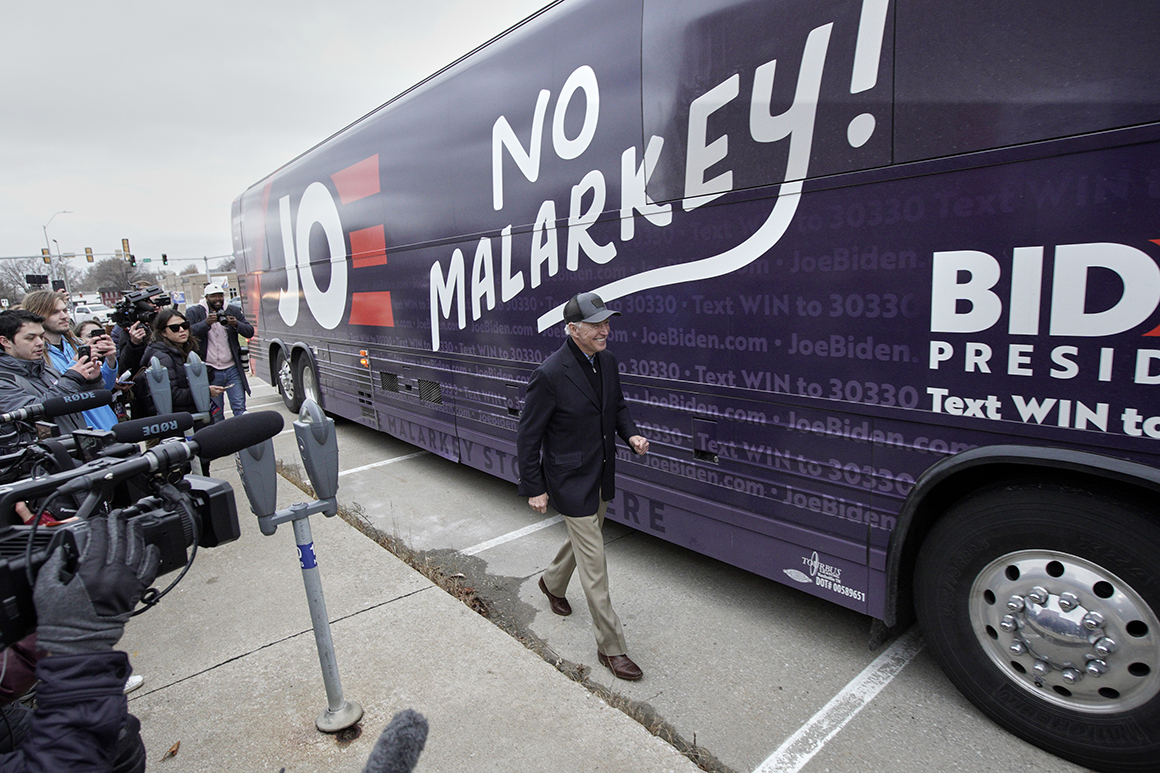 President Trump’s disapproval rating is at 55.6%, according to the FiveThirtyEight  polling average. That’s the highest it’s been in nearly three years.

Jonathan Swan: “President Trump and his top advisers are trying to rebrand Joe Biden as a danger to America — with some aides admitting privately that the ‘Sleepy Joe’ nickname will never gin up the visceral reaction they exploited against ‘Crooked Hillary’ Clinton.”

“Trump’s aides say it will be harder to make Biden widely despised than it was with Clinton, who was a conservative media target for decades… So they will try to argue that he wouldn’t really be in charge.”

“Wisconsin Republicans who oppose making it easier for people to vote absentee have taken advantage of the opportunity to vote by mail in recent elections, with more than 80% of GOP members of the state Legislature doing it in April,” the AP reports.

“Republicans fought against making that election mail-in only as Democrats and Gov. Tony Evers proposed.”

Playbook: “He’s getting smoked by Joe Biden. The coronavirus is raging. Governors and local leaders are closing states and municipalities again. The president’s campaign is being forced to rethink rallies after an embarrassing fiasco in Oklahoma. Republicans moved their convention to Florida, which has seen a surge in coronavirus cases.

“Police reform fell flat in the Capitol. It turns out that Russia may have been paying the Taliban to kill American soldiers on Trump’s watch. Republican control of the Senate is up for grabs. The GOP has but a sliver of a prayer of recapturing the House. The economy is still on life support. The United States’ relationship with China is in the toilet after the spread of Covid-19. Republicans have no earthly idea what they will do if the Supreme Court strikes down Obamacare — despite having pledged to replace the health care law for a decade.”

Politico: “The president has privately come to that grim realization in recent days… amid a mountain of bad polling and warnings from some of his staunchest allies that he’s on course to be a one-term president.”

Rick Hasen: “We need a 28th Amendment for voter equality around which people can organize and agitate. Organization could emulate the battle for passage of the 19th Amendment, which bars gender discrimination in voting. It took more than generation for that amendment to pass, and along the way activists for equal women’s suffrage got state legislatures to bolster voting rights and the public to change its attitudes about voting.”

“It has been 100 years since passage of the 19th Amendment and 150 since the passage of the 15th Amendment barring racial discrimination in voting. Despite those accomplishments, every national election features endless angst and litigation over assuring people the right to vote, which puts special burdens on those who already face the greatest barriers. We need to bring that struggle to an end and press forward toward a new voting rights amendment that would assure that our representatives truly reflect the will of the people.”

Joe Biden released statistics on the diversity of his presidential campaign staff on Saturday evening, announcing that 35% of his full-time staff and 36% of his full-time senior staff are people of color, the New York Times reports.

A majority of Biden’s staff and senior staff are women, 53% and 58%, respectively.

“It would be a plus to have an African American woman. And I’ll reiterate I have never said it is a must. The only must is to win this campaign. That’s a must, not just for black people but for the country. Because I really believe if Joe Biden does not win this campaign, this country’s democracy will crumble.” — Rep. Jim Clyburn (D-SC), in an interview with The Guardian, on Joe Biden’s running mate.

“The explosion of Covid-19 cases in Sun Belt states is becoming another albatross for President Donald Trump’s reelection hopes — and creating a new opening for Joe Biden and Democrats in November,” Politico reports.

“Republican governors in Florida, Arizona and Texas followed Trump’s lead by quickly reopening their states while taking a lax approach to social distancing and mask-wearing. Now each of them is seeing skyrocketing coronavirus caseloads and rising hospitalizations, and Republican leaders are in retreat.”

“It’s hard to overstate the gravity of the situation for Trump: Lose any one of the three states, and his reelection is all but doomed. Liberal outside groups and the Biden campaign have launched digital and TV ads in Florida, Arizona and Texas hitting Trump for allowing a second wave of coronavirus. The developments have buttressed Biden’s main argument against Trump: that he’s incapable of bringing stability or healing in a time of crisis.”

“President Trump’s campaign, facing a growing disadvantage in polls, has started reserving spots for a television ad blitz set to run in several swing states during the final months of the race,” CNBC reports.

“The ad buy, worth more than $16 million, will start in September and focus on “the key states of Arizona, Florida, Ohio, Wisconsin, Pennsylvania and North Carolina.”

Harry Enten: “Since 1940, the only incumbent losing at this point in the cycle who would go on to win another term was Harry Truman. He, like Trump, was down around 10 points to Thomas Dewey in the early summer of 1948. But remember, Truman was not elected president before taking the 1948 election. He ascended to the office through the vice-presidency, after Franklin Roosevelt died in 1945.”

“In terms of elected incumbents, Jimmy Carter was the one to be down by as much as Trump is right now. Carter went on to get crushed by Ronald Reagan in 1980.”

Politico: “Behind the scenes, Trump and his team are taking steps to correct course. In the week since his Tulsa rally, the president has grudgingly conceded that he’s behind, according to three people who are familiar with his thinking. Trump, who vented for days about the event, is starting to take a more hands-on role in the campaign and has expressed openness to adding more people to the team. He has also held meetings recently focusing on his efforts in individual battleground states.”

“Trump’s son-in-law Jared Kushner, who effectively oversees the campaign from the White House, is expected to play an even more active role.”

“President Trump and his campaign team are grappling with how to resuscitate his imperiled reelection effort amid a wave of polling that shows him badly trailing Joe Biden and losing traction even among core constituencies,” the Washington Post reports.

“Some Trump advisers and allies are privately pushing for sweeping changes to the campaign, including the idea of a major staff shake-up and trying to convince the president to be more disciplined in his message and behavior.”

“But so far, the campaign has settled only on incremental changes — such as hiring and elevating a handful of operatives who worked on Trump’s upset victory in 2016 — and has yet to settle on a clear message for his reelection.”

“The reason is the 2016 election, which humbled the president’s smuggest critics and broke the reputation of many election prognosticators. The argument against electoral despair is the same argument Trump makes about rebuilding the post-pandemic economy: He did it once, and he can do it again.”

“There’s a catch. Trump campaign veterans and his supporters have almost completely erased the role of two October surprises that damaged Hillary Clinton, in an election so close that any individual factor could have decided it. The first was a series of hacks into Clinton campaign email, culminating in the release via WikiLeaks of more than 20,000 pages from the personal account of John Podesta. The second was the decision of then-FBI Director James B. Comey to announce, in a letter to Congress, that there would be a probe of emails found on a Clinton aide’s laptop.”

Jacksonville, Florida — which is set to host the Republican National Convention in August — announced that it will mandate face masks indoors and in public to help curb the spread of coronavirus.

“The Republican National Committee announced on Monday that its convention in Jacksonville would comply with any health regulations, including mask-wearing measures, that the city has imposed,” NBC News reports.

“On Monday, the city announced that masks will be mandatory indoors and in public places where social distancing is challenging.”

“The Montana Republican Party and two minor party qualification committees violated state campaign finance laws in a successful effort to qualify the Green Party of Montana for the primary ballot without the Green Party’s knowledge,” the AP reports.

“The Montana GOP has acknowledged paying Advanced Micro Targeting $100,000 to gather signatures to certify the Green Party for the ballot. The money was also listed as an in-kind contribution to a group called Montanans for Conservation, which didn’t register as a minor party qualifying committee until after the Green Party was certified for the ballot on March 6.”