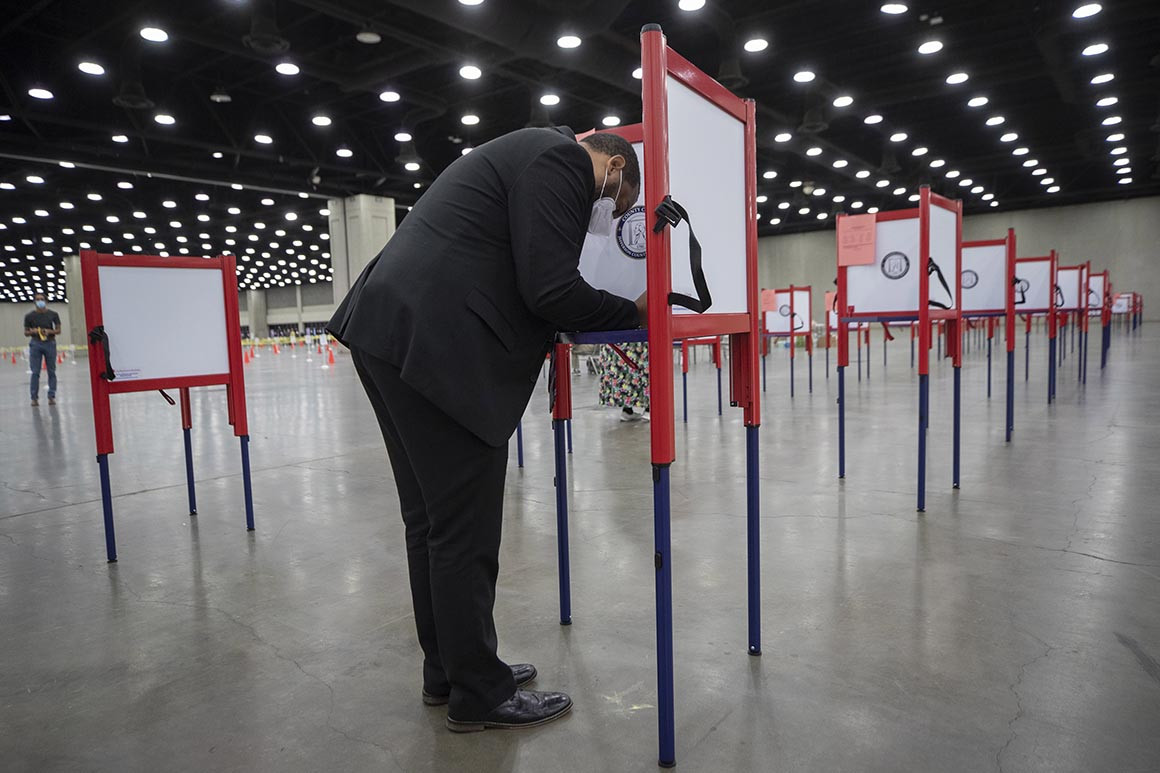 A new ABC News/Ipsos poll finds 76% of Americans are concerned about contracting the coronavirus, levels of concern not seen in a month.

Also interesting: 56% conclude that the country’s moving too quickly to reopen, while only 15% say it’s moving too slowly and 29% believe the country is moving at about the right pace.

Well one of the things that will be really great: you know, the word experience is still good. I always say talent is more important than experience. I’ve always said that. But the word experience is a very important word. It’s a very important meaning. I never did this before, I never slept over in Washington. I was in Washington I think 17 times, all of a sudden I’m the president of the United States, you know the story, I’m riding down Pennsylvania Avenue with our First Lady and I say, ‘This is great.’ But I didn’t know very many people in Washington, it wasn’t my thing. I was from Manhattan, from New York. Now I know everybody. And I have great people in the administration. You make some mistakes, like you know an idiot like Bolton, all he wanted to do is drop bombs on everybody. You don’t have to drop bombs on everybody. You don’t have to kill people.

Jonathan Bernstein: “Can you make heads or tails out of it? I’m normally inclined to give people the benefit of the doubt if impromptu comments don’t quite work, but it’s hard to make much sense of this at all.”

“The Supreme Court declined Friday to force Texas officials to offer mail-in ballots to all voters in the state because of the threat of the coronavirus, not just those over 65,” the Washington Post reports.

“The justices, without comment, turned down a request from the Texas Democratic Party to reinstate a district judge’s order that would affect the upcoming primary election in July and the general election in November.”

“President Trump’s storied grip on the white working class is weakening among women, threatening both his reelection prospects and his party’s efforts to improve its standing with female voters,” the Los Angeles Timesreports.

“While working-class men remain among Trump’s most loyal backers, defections among their wives, sisters and daughters are a big part of the president’s recent slide in opinion polls.”

A journalist who attended President Donald Trump’s rally in Tulsa last week said Friday he has tested positive for the coronavirus, the AP reports.

“Recent polls show President Trump losing ground to Joe Biden across a wide range of demographic groups, but his standing with suburban voters is particularly sobering for his re-election chances,” Bloomberg reports.

“Biden leads Trump 60% to 35% in suburban areas, according to an NPR/PBS/Marist poll released Friday. Trump won those areas in 2016, 49% to 45% for Hillary Clinton, as he made inroads in working-class suburbs that formerly supported Democrats.”

“Suburban women are particularly problematic for Trump. Women from suburbs and small cities support Biden 64% to 35%. Men from the same places support Biden 48% to 44%.”

“President Trump’s extreme opposition to mail-in ballots is more likely hurting him and down-ballot Republicans than it is helping him,” the Washington Examiner reports.

“Mounting evidence in voter registration data, a survey, and organizer anecdotes shows that instead of preventing the voting method from being a major factor in the November election, his stance is turning Republican voters off from using the method entirely, which could have the effect of depressing Republican votes.”

Ruy Teixeira notes the magnitude of the 2016-to-2020 shift of older voters from Republicans to Democrats could mirror the shift among voters from Barack Obama in 2012 to Donald Trump in 2016.

“The bipartisan States of Change project estimates that Mrs. Clinton lost this group by around 15 points. By contrast, the nonpartisan Democracy Fund + U.C.L.A. Nationscape survey, which has collected over 108,000 interviews of registered voters since the beginning of the year, has Mr. Biden leading among seniors by about six points. We are looking at a shift of over 20 points in favor of the Democrats among a group that should be at least a quarter of voters in 2020.”

Alan Abramowitz: “Trump campaigned more times in more states than Hillary Clinton in 2016. However, a regression analysis of the 2016 results does not show rallies having a significant impact on that election’s results.”

“Campaigns may derive indirect benefits from rallies, though, such as voter contacts, press coverage, and donations. But there’s not much evidence to show that the number of rallies in a given state had an impact on the results.”

A Wall Street Journal editorial: “President Trump may soon need a new nickname for ‘Sleepy Joe’ Biden. How does President-elect sound? On present trend that’s exactly what Mr. Biden will be on Nov. 4, as Mr. Trump heads for what could be an historic repudiation that would take the Republican Senate down with him.”

President Trump told Fox News that Joe Biden “is going to be president because some people don’t love me maybe because all I’m doing is my job.”

David Hopkins: “The quadrennial celebration of the key strategists behind the winning candidate as unrivaled masters of the political arts usually reflects an assumption that the outcome proved them to be savvier or more ruthless than their counterparts in the losing camp. But most of the time, there are equally smart and tough people on both sides of a race. One competitor will inevitably be elected and the other defeated—it’s the nature of the business—but that doesn’t mean that the winners are always geniuses and the losers always incompetents.”

“Interestingly, the 2020 election may be the first in a while that has not generated substantial press coverage of the top professional staffers in the two major presidential campaigns.”

Amy Walter: “One of the biggest impediments to driving up Biden’s unfavorable ratings is the president himself. Trump is unable to take himself out of the spotlight, even when it would benefit him. In fact, we may all look back next year and point to two unnecessary public appearances — the one in front of St. John’s church that required the military to clear peaceful protesters in front of the White House and the rally in Tulsa in the middle of a spike in COVID infections — that sealed his political fate.”

“The Trump campaign and GOPers know that they can’t afford this election to be a referendum on Trump. But, the president himself can’t help but ensure that it is.”

Associated Press: “Biden’s campaign is confident the circumstances for Trump, who now has a well-established political record, have complicated his ability to drag down his opponent with a barrage of attacks.”