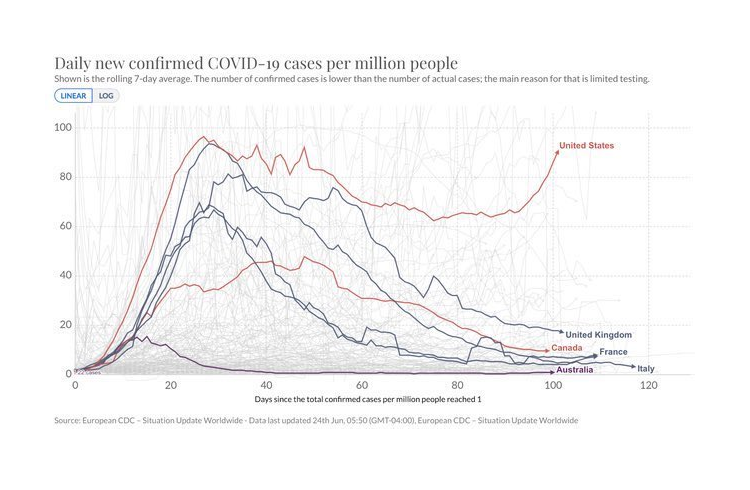 “President Trump keeps spinning a tale about COVID-19 that is at odds with his own administration’s disease experts and data compiled by his own coronavirus task force,” NBC News reports. “In Trump’s telling, the deadly pandemic isn’t really a serious threat to the public and rising infection rates are simply due to increased testing.” Said Trump on Tuesday in Phoenix: “It’s going away.”

“But on the same day, the coronavirus task force produced an internal document showing that Phoenix had the highest number of new cases among the 10 metropolitan regions where the week-over-week change in infection rates spiked the most. Arizona’s biggest city had recorded 13,169 new cases over the previous seven days, accounting for a jump of 149.2 percent over the previous week’s infection rate.”

“The U.S. today is getting closer to the worst-case scenario envisioned in the spring — a nationwide crisis, made worse by a vacuum of political leadership, threatening to overwhelm hospitals and spread out of control,” Axios reports.

“Nationwide, cases are up 30% compared to the beginning of this month, and dramatically worsening outbreaks in several states are beginning to strain hospital capacity — the same concern that prompted the nationwide lockdown in the first place.”

“President Trump lashed out at the Black Lives Matter movement in twin tweets Thursday, accusing one of its members of treason and lamenting reported plans for a new mural in front of Trump Tower in Manhattan that honors the cause,” the Washington Post reports.

“His comments Thursday were among his most aggressive attacks on the movement that rose up in recent years against racial profiling and police violence.”

Source tell CNN that President Trump “seems aimless as coronavirus cases surge and as a national racial reckoning reaches entities from NASCAR to Disney. Instead of engaging on those matters, Trump has retrenched into the very conduct many believe is the root of his current political predicament.”

“While advisers say Trump is aware of his weakened standing, he has rejected public surveys showing him trailing former Vice President Joe Biden by double digits, claiming they are flawed attempts to suppress the vote. And while advisers and allies have privately — and, this week, publicly — begun to encourage Trump to moderate his tone and change behaviors they fear are alienating wide swaths of the electorate, he has shown almost no willingness to change course.”

“He’s like a child who can’t believe this has happened to him. All his whining and self-pity. Well, this pandemic didn’t happen to him, it happened to all of us. And his job isn’t to whine about it. His job is to do something about it.” — Joe Biden, quoted by CBS News, on President Trump.

This was a great speech. Watch it all.

New York Times: “Invisible outbreaks sprang up everywhere. The United States ignored the warning signs. We analyzed travel patterns, hidden infections and genetic data to show how the epidemic spun out of control.”

“The true number of Americans who’ve been infected with COVID-19 may top 20 million, according to new estimates from the Centers for Disease Control and Prevention,” NBC News reports.

Said CDC director Robert Redfield: “Our best estimate right now is that for every case that’s reported, there actually are 10 other infections.”

Former FDA Commissioner Dr. Scott Gottlieb told CNBC that any policy changes that hot spot states like Texas and Florida decide to implement now likely won’t affect the spread of the coronavirus for weeks to come. Said Gottlieb: “I think it’s going to be difficult now to get this under control.”

“Texas Gov. Greg Abbott (R) announced that he will pause any further phases of reopening Texas and that he is once again putting a stop to elective surgeries to preserve bed space for coronavirus patients in certain counties,” the Texas Tribune reports.

President Trump has personally requested that a statue of a Confederate general be put back up after protesters in Washington tore the monument down, NBC News reports.

“The Pentagon is facing a hemorrhage of talent as senior officials resign amid continued efforts by the White House to purge those perceived as political foes, including the Army lieutenant colonel who testified in the House impeachment hearings,” the New York Times reports.

“The Army this week forwarded to Defense Secretary Mark Esper a list of hundreds of officers who are set to be promoted to the next rank… Included on the list is Lt. Col. Alexander Vindman, a decorated combat veteran who served on the staff of the White House’s National Security Council, where he ran afoul of Mr. Trump after testifying against him in the House impeachment hearings.”

“Three members of a North Carolina police department have been fired after a department audit of a video recording captured one of the officers saying a civil war was necessary to wipe Black people off the map and that he was ready,” the Raleigh News & Observer reports.

One officer said he was going to buy a new assault rifle, and soon “we are just going to go out and start slaughtering them (expletive)” Blacks. “I can’t wait. God, I can’t wait.”

He added that he felt a civil war was needed to “wipe them off the (expletive) map. That’ll put them back about four or five generations.”

A Republican city councilman in Arizona mocked the dying words of George Floyd during a protest he organized against a local order to wear face masks amid the coronavirus pandemic.

Texas Tribune: “Texas’ Hispanic population has grown by more than 2 million since 2010, according to new population estimates released Thursday by the U.S. Census Bureau, and the state’s demographer now predicts that Hispanics will be the state’s largest population group by mid-2021.”

“The revelation comes as President Trump and some members of his administration advocate for another round of stimulus checks. The news that so much money has gone to the dead could add to reluctance from some Republicans to agree to more direct relief payments.”

“West Virginia Gov. Jim Justice (R) forced out the commissioner of his public health bureau on Wednesday, hours after he publicly questioned the accuracy of the state’s coronavirus data and detailed growing outbreaks in about a dozen counties,” NBC News reports.

“The governor has so far declined to strengthen West Virginia’s virus restrictions in response to the increases. He has repeatedly balked on mandating face masks in public spaces, as other governments have done, saying such an order would be politically divisive.”

A New York court rejected an effort by President Trump’s family to block publication of a book by the president’s niece, Mary Trump, who is said to describe the “nightmare of traumas” that led to her uncle being the “world’s most dangerous man,” the Washington Post reports.

However, the effort to block the book is set to continue in a different court.

The judge dismissed the effort by President Trump’s brother, Robert, to block publication on grounds that it was filed in an improper jurisdiction and that a family probate dispute had long been settled.

“Jack Abramoff, the onetime Washington insider who went to prison in a lobbying scandal, was charged with a criminal conspiracy related to crypto currency and lobbying disclosure,” Bloomberg reports.

“Abramoff has agreed to plead guilty and faces as long as five years in prison.”

Said Parsons: “I don’t know that any one person is responsible for that no more than anybody else standing out here in this hallway. Do I feel guilty because we have car accidents, and people die every day? No, I don’t feel guilty about that. Each person that gets in those situations, things happen like that in life, they do.”

“The Trump administration is quietly discussing whether to end a process for congressional review that has allowed lawmakers from both parties to block weapons sales to foreign governments over humanitarian concerns, according to current and former administration officials and congressional aides. The move could quickly advance sales of bombs to Saudi Arabia, among other deals,” the New York Times reports.

“If adopted, the change would effectively end congressional oversight over the sale of American weapons and offers of training to countries engaged in wars with high civilian casualties or human rights abuses, and would certainly widen rifts between the administration and Congress.”