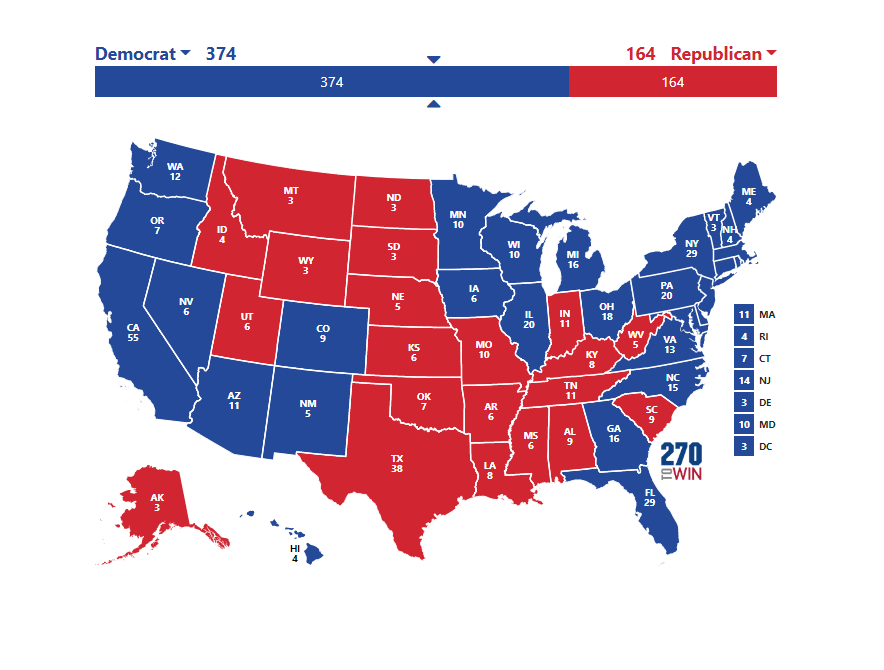 A new Marquette Law School Poll in Wisconsin finds Joe Biden widening his lead over Donald Trump, 49% to 41%. In early May, it was Biden 46% to 43%.

Said pollster Tim Malloy: “You have to go back 60 years to find an election where Ohio was not a lynchpin or a pathway to the presidency. That is why this very close horse race is so deeply consequential. The mantra in the backrooms of GOP and Democratic campaign headquarters has to be… ‘Don’t lose Ohio!’”

“President Trump has lost significant ground in the six battleground states that clinched his Electoral College victory in 2016, according to New York Times/Siena College surveys, with Joe Biden opening double-digit leads in Michigan, Pennsylvania and Wisconsin.”

“Mr. Biden would win the presidency with at least 333 electoral votes, far more than the 270 needed, if he won all six of the states surveyed and held those won by Hillary Clinton four years ago. Most combinations of any three of the six states — which include Florida, Arizona and North Carolina — would suffice.”

Jonathan Chait: “For all the derision that has surrounded Biden’s generally low profile, it is the broadly correct move. Trump is and always has been deeply unpopular. He managed to overcome this handicap in 2016 because Hillary Clinton was also deeply unpopular, though somewhat less so, and turning the election into a choice allowed anti-Clinton sentiment to overpower anti-Trump sentiment. The fact that Biden has attracted less attention than Trump is not (as many Democrats have fretted) a failure. It is a strategic choice, and a broadly correct one.”

“Second, Biden’s isn’t just hiding out. He is doing some things. He has delivered speeches, given interviews, and met with protesters. These forums have tended to display his more attractive qualities, especially his empathy. Only one of them (his Breakfast Club interview) yielded a major gaffe.”

“And third, Biden has managed to communicate a coherent campaign theme. This is often a challenge for Democrats, who usually want to change a whole bunch of policies (health care! environment! progressive taxation!) that resist a simple unifying slogan. But Biden has been able to carry forward the message he used to start his campaign, which he built around Trump’s shocking embrace of racist supporters at Charlottesville, into a promise of healing racist divisions.”

The De­mo­c­ra­tic Na­tional Com­mit­tee said that Joe Biden will ac­cept the pres­i­den­tial nom­i­na­tion in Mil­wau­kee, but the party will urge del­e­gates to skip the sum­mer convention because of coro­n­avirus con­cerns, the Wall Street Journal reports.

Gidley is currently the principal deputy press secretary at the White House.

Axios: “Lynda Bennett’s defeat ruined Trump’s near-perfect record of endorsing winners in GOP primaries — a record he prized and often boasted about. It also puts White House chief of staff Mark Meadows in an awkward position, with allies of the president blaming him for the loss.”

“Meadows vacated the seat to join Trump’s White House earlier this year. The president only endorsed the losing candidate because Meadows’ wife encouraged him to do so.”

Wall Street Journal: “The campaign is unlikely to pull advertising on Facebook, campaign officials said, since it can reach around 175 million U.S. users. The campaign has spent $19.6 million on Facebook ads so far this year. But the rebuke from the social media giant, following restrictions from Twitter and Snapchat, has top campaign officials considering alternatives, such as moving to another, lesser known company, building their own platform or doubling down on efforts to move supporters to the campaign’s smartphone app.”

“But there is disagreement internally over what—if anything—to do next… No other platforms offer the reach of Facebook or Twitter, and with about five months until Election Day, time is running out. The situation has been described internally as ‘code red.’”

Mike Allen: “President Trump’s campaign, recognizing that he’ll lose to himself if November’s election is a referendum on him, is trying to flush Joe Biden into open combat by challenging him to more debates, taunting him as ‘Hidin’ Biden,’ and posing a ‘Question of the day for Joe Biden.’”

“Expect more of this. The Trump campaign is getting very frustrated that Biden is keeping a low profile and letting Trump give himself uppercuts every day.”

New York Times: “Since the beginning of this election cycle in 2019, Rep. Alexandria Ocasio-Cortez  (D-NY) spent $3.6 million on Facebook ads, including nearly $2.4 million since January… The next biggest digital advertiser among House members in 2020… spent $620,000 online.”

Adam Serwer: “Trump, first by embracing the ‘birther’ movement, and later as the candidate who promised to return the United States to an idealized past, successfully rode these backlashes to the White House. Four years later, Trump is hoping to ride the same wave of anger, fear, and resentment to a second term.”

“There’s only one problem: His opponent is Joe Biden.”

“For the past few months, Trump and the conservative propaganda apparatus have struggled to make the old race-and-gender-baiting rhetoric stick to Biden. But voters don’t appear to believe that Biden is an avatar of the ‘radical left.’ They don’t think Biden is going to lock up your manhood in a ‘testicle lockbox.’ They don’t buy that Biden’s platform, which is well to the left of the ticket he joined in 2008, represents a quiet adherence to ‘Kenyan anti-colonialism.’ Part of this is that Biden has embraced popular liberal positions while avoiding the incentive to adopt more controversial or unpopular positions during the primary. But it’s also becoming clear that after 12 years of feasting on white identity politics with a black man and a woman as its preeminent villains, the Republican Party is struggling to run its Obama-era culture-war playbook against an old, moderate white guy.”

“Democrats have opened up a 302,000-voter advantage over Republicans in vote-by-mail enrollment, an edge that could pay big dividends in President Trump’s newly adopted must-win state,” Politico reports.

“Five months before Election Day, more than 1.46 million Democrats have signed up to vote by mail compared to 1.16 million Republicans… By comparison, in 2016, Democrats held an advantage of about 8,800 in vote-by-mail enrollment.”

Philadelphia Mayor Jim Kenney (D) has launched a political action committee to raise money for progressive candidates across Pennsylvania, rekindling speculation that he may run for governor in 2022, the Philadelphia Inquirer reports.