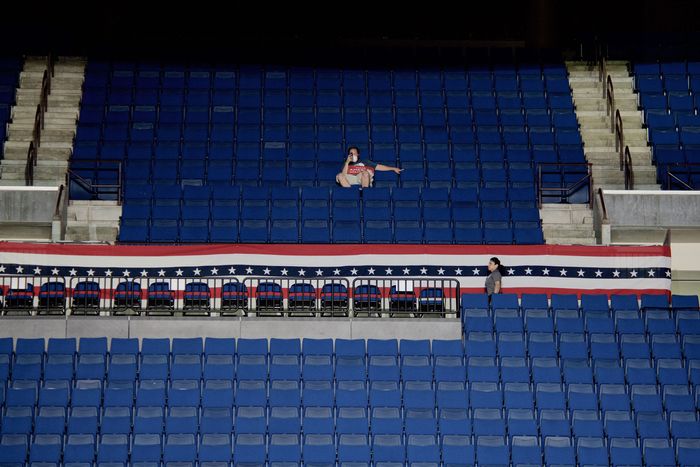 President Trump dodged a question about whether he ordered coronavirus testing to be slowed, after he claimed that he had at his campaign rally over the weekend. Said Trump: “We do more testing than any country in the world by far.”

Washington Post: “President Trump has long used his raucous rallies to road test potential campaign themes and attack lines. And while much attention on his Saturday night appearance in Tulsa focused on the sparse turnout for his first rally since the pandemic ended mass gatherings, Trump’s litany of racially offensive stereotypes sent a clear signal about how he plans to try to revive his flagging reelection effort.”

“Even at a moment of national reckoning over race and racism, Trump demonstrated the extent to which the final four months of the 2020 election will build on the darker themes of a previous campaign notable for its attacks on Hispanic immigrants and Muslims.”

Philip Bump: “On Tuesday, Vice President Pence triumphantly rejected the idea that the country was seeing a second spike in coronavirus cases as the pandemic continued. Writing for the Wall Street Journal, he outlined the data which made him confident that things were improving…”

“A week later, nearly all of the verifiable claims made by Pence are incorrect or have eroded significantly.”

White House economic advisor Larry Kudlow told CNBC that a “second wave” of coronavirus cases isn’t coming and that lawmakers will likely develop another stimulus package by the end of next month.

And yet… Washington Post: “A White House adviser said Sunday that the Trump administration is preparing for a possible second wave in the novel coronavirus pandemic this fall, as 29 states and U.S. territories logged an increase in their seven-day average of new reported cases after many lifted restrictions in recent weeks.”

Said Abbot: “To state the obvious, COVID-19 is now spreading at an unacceptable rate in Texas and it must be corralled.”

“However, he stopped short of introducing any new policies or pulling back on the reopening of Texas businesses.” Every new infection and every new death in Texas is solely the responsibility of Abbott.

“I believe the president is a racist. The statement has to be made.”

“Donald Trump’s campaign advisers had it all mapped out: A blowout rally in Oklahoma — coupled with a withering ad launched days earlier questioning Joe Biden’s mental acuity — would finally shift the focus to the elusive Democrat amid the worst stretch of Trump’s presidency,” Politico reports.

“The ad tested well, and Trump attacked Biden extensively during the Saturday night event, saying the former vice president has ‘surrendered to his party and to the left-wing mob.’ But his remarks were lost in a meandering and grievance-filled two-hour speech, which included a lengthy rendition of him drinking water during his West Point commencement speech a week earlier…”

“The partly-empty arena was the biggest embarrassment and has received the lion’s share of media attention. But the issues surrounding the rally — an event that his advisers unanimously saw as a turning point for Trump — extended beyond crowd size and raised questions about the strength of his campaign less than five months until the election.”

President Trump told Axios he’s had second thoughts about his decision to recognize Juan Guaidó as the legitimate leader of Venezuela and said he is open to meeting with dictator Nicolás Maduro.

Said Bolton: “It varied from time to time. At different points, different people would have influence. But I think the sustained answer to that question over time is Jared Kushner.”

President Trump’s longest-serving national security adviser John Bolton condemned his presidency as dangerously damaging to the United States and argued the 2020 election is the last “guardrail” to protect the country from him, ABC News reports.

Said Bolton: “I hope history will remember him as a one-term president who didn’t plunge the country irretrievably into a downward spiral we can’t recall from. We can get over one term — I have absolute confidence, even if it’s not the miracle of a conservative Republican being elected in November. Two terms, I’m more troubled about.”

Vladimir Putin said he’ll “consider” running for a fifth presidential term in 2024, arguing that the hunt for any successor risks paralyzing Russia’s government as the next election nears, Bloomberg reports.

Said Putin: “I don’t rule out such a possibility. I haven’t made up my mind yet.”

“On July 1, Russians will vote on the most sweeping changes to the nation’s constitution since it was adopted almost 30 years ago. One of the amendments would allow Putin, 67, to reset his term-limit odometer to zero even though he’s already served four, and to helm the country for two more six-year terms when his current one expires in 2024.”

“Mr. Berman refused to sign the letter Thursday, after engaging in a brief back-and-forth drafting process, the people said. Mr. Berman voiced strong objections to the letter, particularly its assertions that Mr. de Blasio imposed a double standard, and described the letter as a political stunt that would strain relations between his office and the city.”

White House press secretary Kayleigh McEnany claimed on Fox & Friendsthat President Trump was not upset by the fact that his rally in Tulsa Saturday night drew just 6,200 people — less than one-third of the arena’s capacity.

But host Steve Ducey wasn’t buying it: “Kayleigh, you’re saying he was not furious? Because we’ve known Donald Trump — he was on this show every Monday for years. That guy, who used to be on our show, would have been furious that something went haywire.”

After another round of testing for Trump campaign staff in Tulsa, two additional members of the campaign advance team tested positive for the coronavirus, MSNBC reports.

The White House is apparently scaling back its temperature checks, as Washington, D.C. enters the second phase of its reopening today, NBC News reports.

“President Trump issued an executive order Monday barring many categories of foreign workers and curbing immigration visas through the end of the year, moves the administration characterized as necessary to protect U.S. workers following steep job losses amid the coronavirus pandemic,” the Washington Post reports.

“The freeze will apply to work visas that many companies use, especially in the technology sector, landscaping services and the forestry industry. It excludes agricultural laborers and some health care workers and includes a special exemption for the approximately 20,000 child-care providers who come to the United States as ‘au pairs.’”