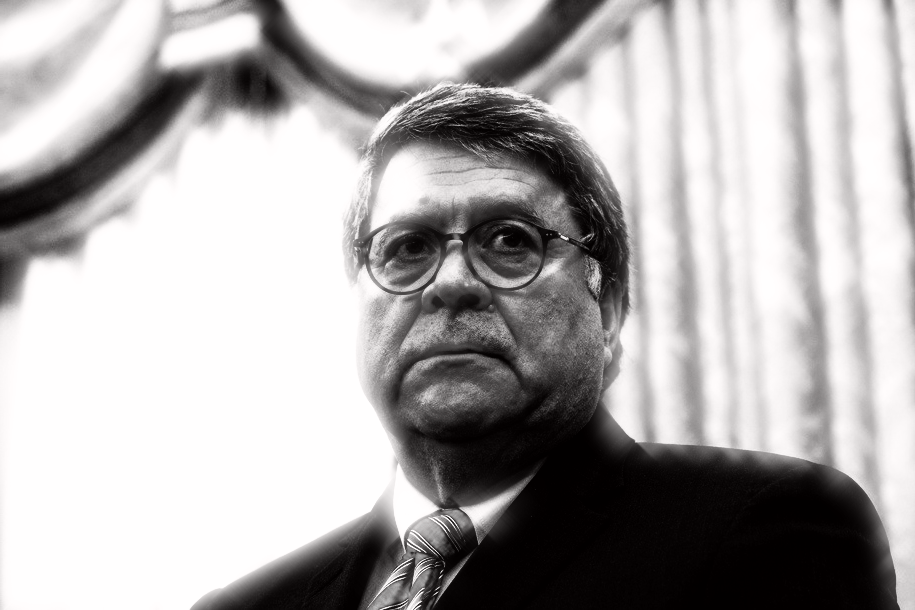 “Attorney William Barr said on Saturday that President Trump had fired the top federal prosecutor in Manhattan, who has investigated the president’s closest associates, deepening a crisis over the independence of law enforcement and the president’s purge of officials he views as disloyal,” the New York Times reports.

“Mr. Trump removed the prosecutor, Geoffrey S. Berman, United States attorney for the Southern District of New York, after he had refused to step down on Friday night. The president’s announcement capped an extraordinary clash over an office that has been at the forefront of corruption inquiries into Mr. Trump’s inner circle.”

Barr said Berman had “chosen public spectacle over public service,” while adding, “Because you have declared that you have no intention of resigning, I have asked the President to remove you as of today, and he has done so.”

There is one problem for Barr: Trump says he did not fire Berman and is not involved.

President Trump appeared to contradict Attorney General William Barr and distance himself from the firing of U.S, Attorney Geoffrey Berman today, saying he was “not involved,” the New York Times reports.

The Washington Post says Trump told reporters that Berman’s ouster was “all up to the attorney general” and that he hadn’t become involved in the matter. Said Trump: “That’s his department, not my department. But we have a very capable attorney general, so that’s really up to him.”

Wall Street Journal: “The matter is nearly certain to end up in court, as the legal grounds for removing a sitting U.S. Attorney remain murky.”

Senate Judiciary Committee Chairman Lindsey Graham (R-SC) signaled on Saturday that he will not move forward with a nomination for the U.S. attorney for Manhattan without sign off from two Democratic senators, The Hill reports.

Graham said he would wait to receive a “blue slip” — a sheet of paper that indicates if a home-state senator supports a nomination — before moving forward with a new nominee to be the U.S. attorney for the Southern District of New York.

Said Graham: “As to processing U.S. Attorney nominations, it has always been the policy of the Judiciary Committee to receive blue slips from the home state senators before proceeding to the nomination. As chairman, I have honored that policy and will continue to do so.”

Playbook: Many questions must be asked the morning after President Trump’s administration abruptly tried to oust Geoffrey Berman, the U.S. attorney for the southern district of Manhattan. Here are a few of them:

Six members of the Trump campaign’s advance team for tonight’s rally in Tulsa tested positive for the coronavirus, CBS News reports. The campaign says those staffers won’t be present at the rally, but the campaign is still not enforcing mask rules.

New York Times: “Mr. Trump, made aware of the sick campaign aides before departing for the rally, was incensed the news was made public.”

President Trump told a crowd gathered for his campaign rally in Tulsa he asked officials to “slow the testing down” for the coronavirus, Axios reports.

“This is the first time Trump has said that he had asked officials to slow testing down. At the rally, he also reiterated his claims that ramped up testing was to blame for the U.S. having the world’s highest number of COVID-10 cases, as he again blamed China for the pandemic.”

“President Trump’s campaign boasted for days that a million people had requested tickets for his Saturday night rally. The campaign added an outdoor overflow area to accommodate the anticipated massive crowd,” the Washington Post reports.

“But by the time Trump took the stage in Tulsa, there were thousands of empty seats in the arena. The overflow area was scrapped. And aides were left trying to explain why a president who has placed enormous value on his crowd sizes was addressing a smaller-than-expected audience.”

New York Times: “President Trump’s attempt to revive his re-election campaign sputtered badly on Saturday night as he traveled to Tulsa for his first mass rally in months and found a far smaller crowd than his aides had promised him, then delivered a disjointed speech that did not address the multiple crises facing the nation or scandals battering him in Washington.”

President Trump defended his decision to move ahead with a controversial large-scale Tulsa rally this weekend amid the pandemic, telling Axios that “we have to get back to living our lives” and “we’re going to have a wild evening tomorrow night at Oklahoma.”

Pressed on why he wasn’t using his presidential bully pulpit to encourage rally attendees to wear masks, Trump described masks as “a double-edged sword.” When asked if he recommended people wear them, he added: “I recommend people do what they want.”

President Trump declined to tell Axios whether he retains full confidence in Defense Secretary Mark Esper, and said Esper and Joint Chiefs Chairman Mark Milley should have been “proud” to join him on the now-infamous walk across Lafayette Square.

“In recent days, President Trump has casually asked administration officials and close advisers if John Bolton — his former national security adviser who is releasing a new, tell-all book about working in the Trump administration — is prison-bound,” the Daily Beast reports.

Asked Trump: “Do you think he’s going to go to jail for this?”

Vice President Mike Pence twice refused to say that “black lives matter” during an interview on a Philadelphia television station, insisting instead that “all lives matter in a very real sense,” the New York Times reports.

“The vice president’s comments came on Juneteenth, a holiday that commemorates the end of slavery in America. And he refused to specifically say that black lives matter at a time when the country is convulsing in outrage about racial injustice at the hands of the police following George Floyd’s death in Minneapolis last month.”

“Hice’s statement is significant because the caucus, which represents the House’s most conservative members, helped recruit Greene to run for this seat and has poured nearly $200,000 into her campaign.”

“Hice joins other Republicans in criticizing racist, anti-Muslim and anti-Semitic remarks that Greene has made over the years and which were detailed in a Politico article.”

“Biden’s top aides moved quickly on Thursday to argue that it’s Trump who has taken a weak approach to the rising superpower. They seized on accusations from Bolton, Trump’s former national security adviser, that the president continually kowtowed to Xi and ignored human rights abuses while trying to get his foreign counterpart’s assistance with domestic politics.”

The EPA announced that it will not regulate or limit a toxic chemical compound linked to infant brain damage in drinking water, Axios reports.

The New York Times notes the EPA has revoked or rolled back 66 environmental regulations.

“German Chancellor Angela Merkel warned her fellow leaders that the European Union is facing its deepest recession since World War II and that will lead to very, very difficult times indeed,” Bloomberg reports.

“She wondered whether people have understood exactly what this means and cautioned that the EU has every interest in having a recovery plan in place by the end of the summer ahead of events like the U.S. election in the fall.”