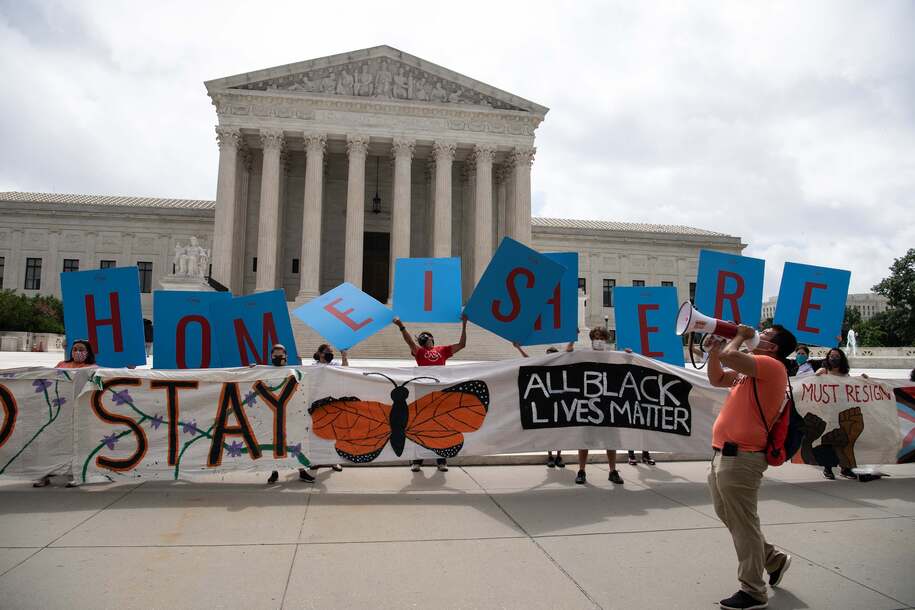 The Supreme Court blocked the Trump administration’s attempt to end the Deferred Action for Childhood Arrivals, an Obama-era program that protects hundreds of thousands of immigrants brought to the US as children from deportation, CNN reports.

New York Times: “The court’s ruling was a blow to one of President Trump’s central campaign promises — that as president he would ‘immediately terminate’ an executive order by former President Barack Obama that Mr. Trump had called an illegal executive amnesty for hundreds of thousands of young immigrants.”

“A senior State Department official who has served in the Trump administration since its first day is resigning over President Trump’s recent handling of racial tensions across the country — saying that the president’s actions ‘cut sharply against my core values and convictions,’” the Washington Post reports.

“Mary Elizabeth Taylor, the assistant secretary of state for legislative affairs, submitted her resignation on Thursday. Taylor’s five-paragraph resignation letter, serves as an indictment of Trump’s stewardship at a time of national unrest from one of the administration’s highest ranking African Americans and an aide who was viewed as both loyal and effective in serving his presidency.”

“Vanity Fair has seen unredacted pages from the book and it’s clear why the White House tried to keep Trump’s words secret: they are deeply embarrassing and illustrate Trump’s naked politicization of America’s foreign policy.”

“According to an unredacted passage shown to Vanity Fair by a source, Trump’s ask is even more crudely shocking when you read Trump’s specific language. ‘Make sure I win,’ Trump allegedly told Xi during a dinner at the G20 conference in Osaka, Japan last summer. ‘I will probably win anyway, so don’t hurt my farms.… Buy a lot of soybeans and wheat and make sure we win.’”

NBC News: “Justin Walker epitomizes the conservative judicial project. He became a federal judge at 37 with no trial experience and sterling right-wing credentials. Eight months later, he has been promoted to the powerful U.S. Court of Appeals for the D.C. Circuit, a frequent feeder to the Supreme Court.”

“Walker’s confirmation Thursday by a Senate vote of 51 to 42 puts President Donald Trump one shy of his 200th judicial confirmation, which is teed up for next week. It’s a number not achieved by any president at this stage in four decades.”

Sen. Roy Blunt (R-MO) blocked the Senate from passing a bill to remove Confederate statues from the Capitol, The Hill reports.

They will be removed on Juneteenth.

“In two Facebook posts, Donald Trump’s reelection campaign tied the loose network of anti-fascist activists known as ‘Antifa’ to an upside-down red triangle, a symbol strikingly similar to one used by Nazis in concentration camps to identify political prisoners, communists and people who protected Jews,” The Forward reports.

“Facebook  said it had taken action against ads run by President Trump’s re-election campaign for breaching its policies on hate,” CNN reports.

Philip Bump: “For all of the valid criticism President Trump has faced during his time in office, his ability to be effective is constrained by one recurring problem.”

“Someone keeps hiring staffers who Trump thinks are terrible.”

Susan Hennessey: “One interesting wrinkle for the government is that in order to claim elements of Bolton’s book are classified, the government must admit the information in question is true. There’s no such thing as a classified lie.”

First-time claims for unemployment insurance totaled 1.5 million last week, well above the 1.3 million expected, CNBC reports. This was the 13th straight week that claims have totaled above 1 million.

Paul Krugman: “If you listen hard, you can hear the sound of dead cats bouncing.“

Susan Glasser: “John Bolton was not looking to make friends in the Trump White House when he served as the national-security adviser, nor did he do so. Bolton’s disdain for his colleagues in the Administration announces itself early and often in his new memoir, The Room Where It Happened, which is due out Tuesday, pending the outcome of a legal battle with Trump’s Justice Department. Bolton mocks, disparages, or clashes with Steven Mnuchin, Nikki Haley, Rex Tillerson, James Mattis, Mike Pompeo, and others, all within the book’s first hundred pages. By the end of the nearly five-hundred-page book, Bolton also criticizes Mick Mulvaney, Jared Kushner, the entire White House economic team, many of his foreign counterparts, and, although he shares their misgivings about Trump, the House Democrats who impeached the President.”

“This is Washington score-settling on an epic scale…”

“The ultimate score-settling in the book is not with Pompeo or Mnuchin. It is with Donald Trump, a man so corrupt and profoundly unsuited for the Presidency that his own national-security adviser, a lifelong Republican with unimpeachable partisan credentials, came to believe he adopted ‘obstruction of justice as a way of life.’”

Charlie Sykes: “The Nixon Watergate analogy notwithstanding, has any other president faced this accumulation of public commentary from members of his own administration?”

“These are folks who have watched him up close, who have seen how his mind works, and how he handles the job. We’re not talking here about leakers like Omaraosa or other hangers-on, we are hearing now from his former secretary of defense, chief of staff, and national security advisor. And there will be more.”

Anne Applebaum: “He could have spoken to Robert Mueller. He could have given evidence in the House. He could have convened Republican Senators — they would have listened to him — to tell them how dangerous the president is. Instead he stayed silent…”

“All of his life he thought he was pushing America’s interests around the world. But when he had the opportunity to do something truly important for America — to torpedo this disastrous presidency — he failed.”

This chart is already out of date with respect to Delaware.

President Trump told the Wall Street Journal that there was some systemic racism in the U.S. but he took credit for popularizing Juneteenth, the commemoration of the end of slavery.

Said Trump: “I’d like to think there is not. but unfortunately, there probably is some. I would also say it’s very substantially less than it used to be.”

He added: “I did something good: I made Juneteenth very famous. It’s actually an important event, an important time. But nobody had ever heard of it.”

President Trump told the Wall Street Journal that coronavirus testing is “overrated” and claimed that some Americans may be wearing masks to signal disapproval of him — not as a preventative measure.

He added: “I personally think testing is overrated, even though I created the greatest testing machine in history.”

“New York Gov. Andrew Cuomo will hold his final daily coronavirus briefing on Friday, ending a streak of more than 100 live press events that captivated a country struggling to make sense of the pandemic enveloping their communities,” Politico reports.

“The state, once the outbreak’s epicenter, has finished its descent from the metaphorical coronavirus mountain, said Cuomo, and so he will now hold briefings on an as-needed basis.”

Politico: “Senate Democrats are agonizing over what to do about Senate Republicans’ police reform proposal. They can either shoot down the legislation next week and face charges of obstruction amid a national reckoning on race — or advance a bill that they say needs massive changes in order to meet the moment. The dilemma was hoisted on them Wednesday after Senate Majority Leader Mitch McConnell (R-KY) abruptly rejiggered the Senate schedule to bring Sen. Tim Scott’s (R-SC) legislation to the floor.”

“Democrats have little intention of allowing the bill to pass as is, but the caucus is divided over the best path ahead.”