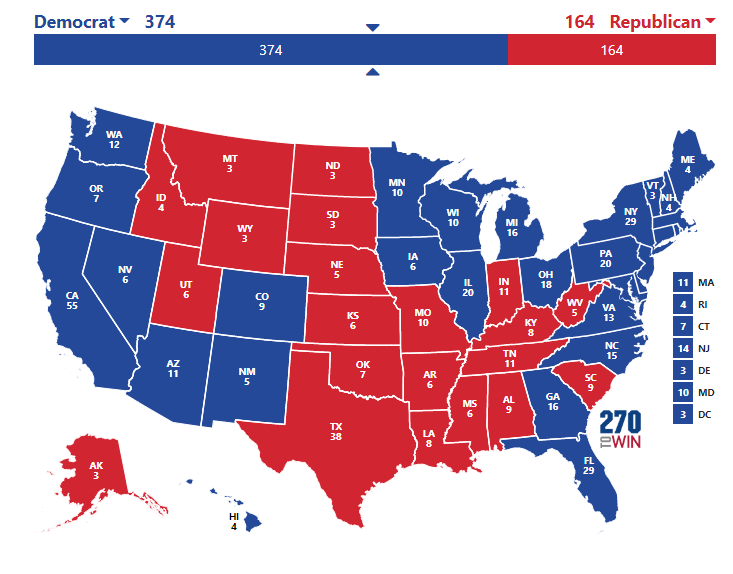 Joe Biden has opened up a 13-point national lead over President Trump, 48% to 35% — the widest margin this year — according to the latest Reuters/Ipsos poll as Americans grow more critical of Trump over the coronavirus pandemic and protests against police brutality.

In a clear warning sign for Trump, his own support base appears to be eroding. Republicans’ net approval of Trump is down 13 points from March to June, declining every month in that span.

The polling data showed a double-digit lead for Biden in Pennsylvania 55% to 39% and Wisconsin 51% to 41% and had Biden leading by seven points in Florida.

The Map above shows the electoral college vote if the election were held today.

“Desperate for victory after watching the presidential nomination slip through their fingers, progressives have found a new cause to rally around,” Politico reports.

A Republican super PAC is funding an outside effort to help reelect Rep. Elliot Engel (D-NY), The Intercept reports.

“The PAC, presumably due to its visible Republican ties, is not spending directly in Engel’s New York primary. Instead, it funneled $100,000 to another super PAC, called Democratic Majority for Israel.”

But Raffensperger also said “he won’t send absentee ballot request forms to 6.9 million Georgia voters again, as he did in the primary. Instead, he’ll create a website where voters can request absentee ballots themselves.”

“Why did Trump have a secretive, midnight run to Walter Reed Medical Center? It’s time we talk about it.” It’s because he had a stroke.

“President Trump’s support among Michigan voters took a sharp dive in polls taken immediately after protesters were forcefully removed so Trump could have his photo taken holding a Bible outside a historic church,” MLive reports.

“Two surveys of Michigan voters taken by Lansing polling firm EPIC-MRA found a widening gap between Trump and Joe Biden after protests against police brutality began outside the White House and across the country. One poll conducted from May 30 to June 3 found Biden leading by 12 percentage points, but the second poll, which started and ended just one day later, recorded a 16-point lead for the former vice president.”

“For most of the campaign, Amy McGrath (D) appeared to be gliding toward the Democratic nomination. She’s backed by the party’s national establishment and has raised prodigious amounts of campaign cash, enabling her to run TV ads since last year to build her statewide name recognition.”

“But Booker, a freshman state lawmaker from Louisville, has won a series of high-profile endorsements and started running TV ads late in the campaign.”

“A group of prominent Republican operatives that includes former officials from the Trump and George W. Bush administrations are launching a super PAC to turn out GOP voters for Joe Biden in November,” Axios reports.

“The Right Side PAC aims to identify former Trump supporters across the country who have cooled to the president’s approach in office and convince them to vote for Biden.”

Joe Biden’s campaign had its biggest fundraiser yet, bringing in $6 million through an event with Sen. Elizabeth Warren (D-MA) on Monday, ABC News reports.

Associated Press: “Only a few legacy-defining moments have clung to President Donald Trump, who often appears to emerge relatively unscathed from a seemingly endless stream of crises and controversies. But the forceful clearing of demonstrators from the park across from the White House has resonated like few others, prompting top military leaders and usually lockstep Republicans to distance themselves from him.”

“It’s one of those rare images that seems unlikely to be overwritten by tomorrow’s headlines, instead claiming a prominent place in Trump’s entry in the history books. It also could help shape an election less than five months away. Even the president and members of his inner circle have privately expressed worry that its impact could be lasting.”

“The prospect of the first Black woman to appear on a presidential ticket looks more likely than ever before, with Joe Biden seriously considering Kamala Harris, Val Demings and Keisha Lance Bottoms to be his running mate,” McClatchy reports.

“But there’s also a serious white contender in the mix who is showing a unique capacity to energize African Americans: Elizabeth Warren.”

“While the continued protests sparked by the death of George Floyd have amplified the pressure on Biden to choose a Black woman as his No. 2, several Black leaders are voicing a notable degree of support for Warren, strengthening her case as a vice presidential pick as other white candidates have lost traction in the current climate.”

Politico: “Pollsters aren’t deliberately skewing their surveys against the president and his party, as Trump’s orbit alleges. The national polls showing Trump trailing Biden by an increasing margin aren’t ‘phony’ or rigged.”

“But some pollsters, especially the relatively few who conduct surveys in battleground states, are still grappling with the same problems that plagued those polls four years ago. In fact, most pollsters believe that, on balance, state polls are overstating the scale of Biden’s advantage.”

“That was precisely the problem in 2016: The national polls were largely accurate, to within the margin of error. But there were too few state polls, and many of those that were conducted failed to collect accurate data, especially from white voters without college degrees in key swing states.”

Facebook CEO Mark Zuckerberg announced the social network will allow its users to turn off seeing political ads, CNBC reports. However, Zuckerberg did not say when this feature will roll out.

Iowa Gov. Kim Reynolds (R) told the Des Moines Register that she will sign an executive order restoring voting rights to people with past felony convictions, a move that will address Iowa’s status as the last state in the country with a lifetime ban on felon voting.

Nebraska Democrats are asking their U.S. Senate candidate, Chris Janicek (D), to quit the race after he sent staffers text messages that the state party described as “sexually inappropriate,” the  Omaha World-Herald reports.

Janicek’s texts described lining up multiple partners for group sex with a female staffer and suggested the “three guys” could be paid.

Janicek has since apologized but said he’s staying in the race.

“The Texas Democratic Party on Tuesday asked the U.S. Supreme Court to expand access of mail-in ballots to all voters in the state, including those afraid of contracting the coronavirus,” the Washington Post reports.

“Texas GOP officials have sought to limit the use of absentee ballots, claiming they are vulnerable to fraud. Currently, Texas allows absentee voting only for voters who are out of state, have a disability or are over age 65.”