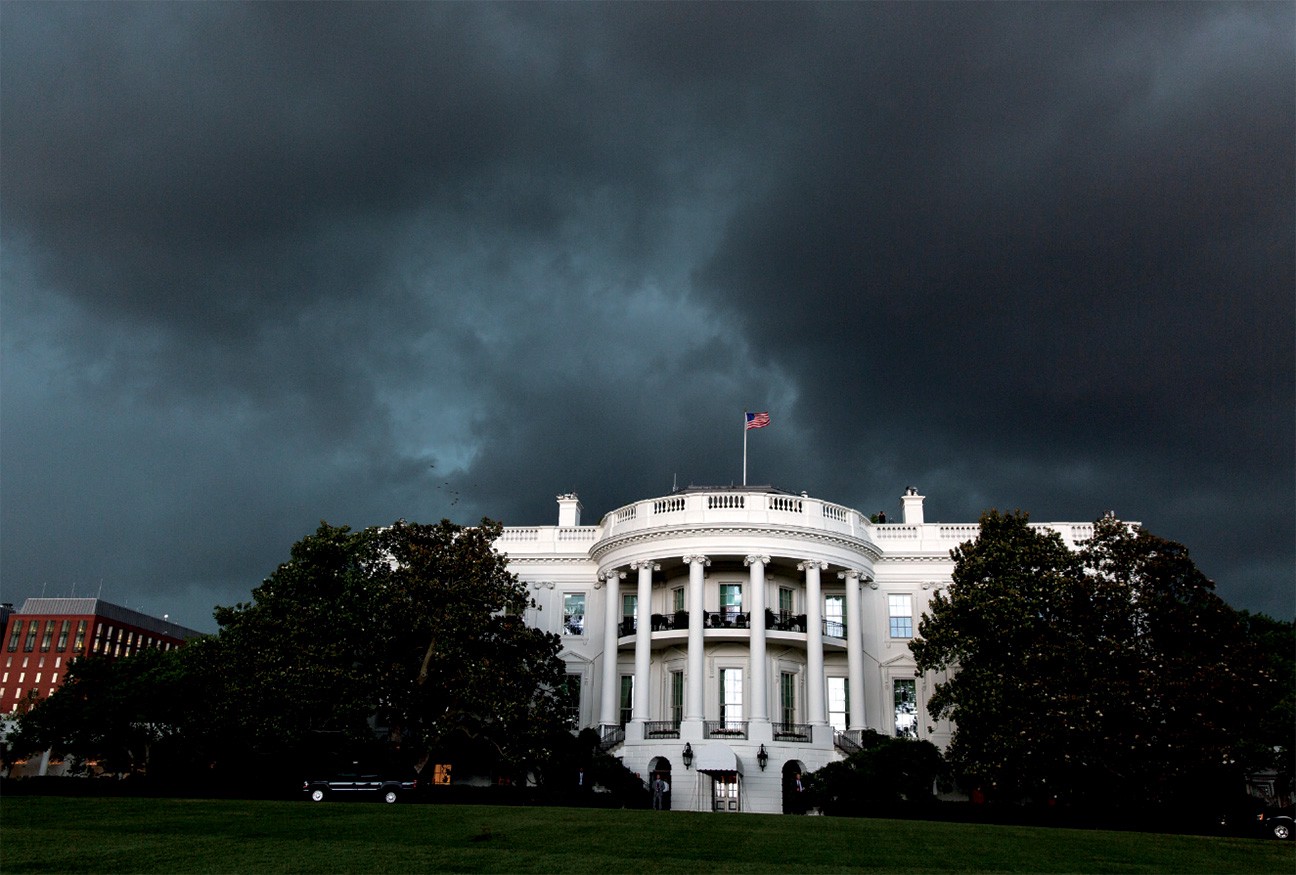 Washington Post: “The succession of images from Lafayette Square on June 1 has reverberated for nearly two weeks — a harrowing cable news split-screen that now has enduring consequences for Trump and outsize symbolism for a nation broken after yet another black man died in the custody of police.”

“So indelible were the pictures that night outside the White House that Lafayette Square has come to represent Trump’s inability to meet the moment. The layers of black fencing erected to close the park and surrounding streets became Fortress White House — a physical manifestation of the president’s distance from Americans’ cries for racial justice. The bold, yellow ‘BLACK LIVES MATTER’ lettering on 16th Street became a declaration of resistance visible from the sky. And the name Lafayette Square itself became a shorthand for so much of what many see as wrong in America.”

“Trump started to lift the glass with his right hand but seemed unable to guide it all the way up to his lips. The president used his left hand to steady the glass and tilt it into his mouth.”

“After his speech, Trump also looked unsteady as he walked down a set of stairs after a lethargic speech to the graduates of the Army college.”

President Trump tweeted that the ramp he was seen appearing to struggle walking down after his West Point commencement speech earlier in the day was actually “very long & steep” as well as “slippery” and yet he still managed not to fall down.

The Washington Post isn’t buying President Trump’s explanation for walking down a ramp at West Point in an unsteady fashion.

“Elements of Trump’s explanation strained credulity. Trump’s claim that the ramp had been ‘very slippery’ was inconsistent with the weather, which on Saturday in West Point, N.Y., was sunny and clear-skied. The grass plain on which the commencement took place was dry.”

“In addition, Trump wrote that he ‘ran down’ the final stretch of the ramp. Video footage of the episode shows the president picking up his pace slightly for the final two steps, but that would hardly be considered a run or a jog by any standard definition.”

Dr. Anthony Fauci, the top U.S. infectious-disease expert, told the Telegraph that the coronavirus will linger in the country for months and it will be about a year before things return to normal.

Said Fauci: “I would hope to get to some degree of real normality within a year or so. But I don’t think it’s this winter or fall, we’ll be seeing it for a bit more.”

“The United States Secret Service said Saturday that one of their agents had used pepper spray to clear protesters from Lafayette Square ahead of President Donald Trump’s photo op, reversing an earlier statement claiming that no one from the agency had done so,” NBC News reports.

“The Secret Service statement is the latest reversal from a law enforcement agency on what happened on the evening of June 1 outside the White House grounds. Statements from law enforcement officials have frequently contradicted what protesters and on-the-ground reporters say happened and what many people witnessed happen on live TV.”

Politico: Senator James Lanford (R-OK) told [CNN] that the Senate Republican bill will be released on Wednesday. [He] said he supports banning choke holds. Sen. Tim Scott (R-SC) is in favor of banning the chokehold — although he noted [that] “the House bill reduces money or takes money away from states on the chokehold issue. We take it from the departments, department by department.”

[Scott] laid out for the first time to [CBS] the three planks in the Senate GOP bill. 1) Localities need to provide information to DOJ when there’s “serious bodily injury or death.” 2) “Training and tactics.” 3) “Drill into officer misconduct.” [However,] Scott called changing qualified immunity — which is a Democratic priority — a “poison pill.” Scott: “We could use a decertification of officer, except for the law enforcement unions, say that’s a poison pill. So we’re going to have to find a path that helps us reduce misconduct within the officers. But at the same time, we know that any poison pill in legislation means we get nothing done. That sends the wrong signal, perhaps the worst signal right now in America. I think we’re going to have legislation that can be negotiated that gets us to the place where something becomes law that actually makes a difference. That’s got to be our goal.”

Scott [also] pushed back on a federal standard for the use of force: “I think it’s really difficult to establish a codified in law, standard for use of force. There’s millions of scenarios that play out. It’s one of the reasons why what we have tried to achieve through the legislation is finding the best practices around use of force around the country, and then provide that clarity and guidance for those departments who may need to have a better, better perspective on use of force. So we’re getting at it, but I’m not sure we’re going to ever codify in law a use of force standard.”

“The killing of George Floyd and the ensuing nationwide wave of protests are generating a record-setting flood of donations to racial justice groups, bail funds and black-led advocacy organizations across America, remaking the financial landscape of black political activism in a matter of weeks,” the New York Times reports.

“Money has come in so fast and so unexpectedly that some groups even began to turn away and redirect donors elsewhere. Others said they still could not yet account for how much had arrived. A deluge of online donations has washed over organizations big and small — from legacy civil rights groups to self-declared abolitionists seeking to defund the police.”

“President Donald Trump has long had two cherished American institutions standing beside him as he railed against athletes taking a knee during the national anthem: NASCAR and the NFL,” Politico reports.

“This week, they both started to walk away. Bending to the cultural moment, NASCAR and the NFL in recent days reversed course on their approach to athletes protesting racial injustice. NFL Commissioner Roger Goodell said he had been wrong for not listening to protesting players earlier and encouraged “all to speak out and peacefully protest.” Meanwhile, NASCAR relaxed rules barring kneeling during the national anthem and banned Confederate flags from its events. Within days, a NASCAR driver was circling a track in a race car emblazoned with #BlackLivesMatter and a NASCAR official was taking a knee during pre-race ceremonies.”

“People burned letters informing them that they can vote by absentee ballot in future elections during a protest near Grand Rapids,” WILXreports.

Harry Enten: “The latest state polls imply that Biden has a double-digit advantage nationally given that Clinton won the popular vote by 2 points. These state polls are in sync with the national polls that show Biden’s lead at 10 points.”

“Importantly, many of these polls have been conducted across states that are the heart of the 2020 battleground. States like Arizona and Wisconsin are included in this group. Polls have also been conducted in states that Biden would like to win, but aren’t must wins for him, such as Ohio and Texas. Crucially, these are demographically distinct states in different regions of the country indicating that Trump is losing ground in a lot of different places.”

“All together, it’s the latest evidence that Trump cannot count on the electoral college to save him. The leads that Biden is earning right now are well outside any potential polling miscue like the one that occurred on the state level in 2016. The former vice president, simply put, is well ahead of Trump at this time.”

Trump campaign manager Brad Parscale claimed that 800,000 have signed up for President Trump’s rally in Tulsa next weekend.

Asked by CNN’s Jake Tapper if people should wear masks at the event, Kudlow said “probably so.”

“I want to also say, though, that hospitalizations may be going up, but that’s because elective procedures are now permitted,” Kudlow said, though several states are reporting increased coronavirus hospitalizations, specifically. “And maybe, most importantly, Jake, although the case rate has increased a bit, we’re not talking about a second round here.”

Sen. James Lankford (R-OK) confirmed on Sunday that he’ll attend President Trump’s upcoming campaign rally in Oklahoma, adding that despite the state’s rising coronavirus cases he has yet to decide if he’ll wear a face mask during the event, the Daily Beast reports.