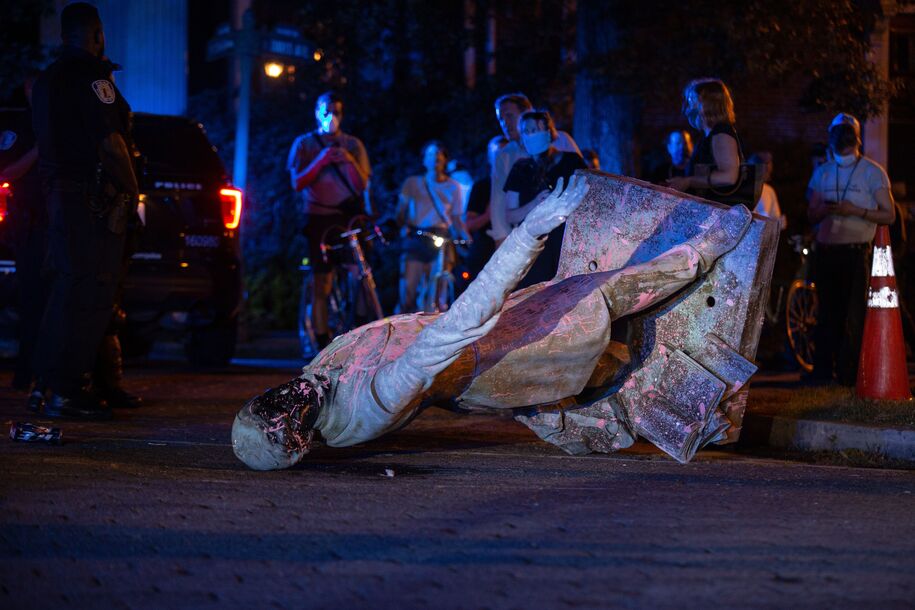 CNN and NBC News: The Chairman of the Joint Chiefs of Staff did not tell the White House that he planned to release a video admitting that it was a mistake for him to appear at Trump’s photo-op outside of St. John’s church last week. Before publishing his pre-recorded apology, during which he declared “I should not have been there,” Gen. Mark Milley contacted other high-ranking military officials and former Joint Chiefs, but not the White House.

Separately, Gen. Milley discussed resigning over his participation in the photo-op, speaking “to several of his longstanding mentors to discuss his situation.” In recent days, however, Trump has tried to downplay any tension between himself, Mark Esper, and Milley. “If that’s the way they feel, I think that’s fine,” he said. “I have good relationships with the military. I have rebuilt our military.”

CNN: Defense Secretary Mark Esper ordered a review of the National Guard deployments in support of U.S. law enforcement in response to the nationwide protests over the murder of George Floyd. The review is considered standard procedure after any significant operation, and will specifically focus on the Guard’s work with federal and local police forces as it relates to the training, organizing, and deployment of National Guard units. Secretary of the Army Ryan McCarthy will lead the review, which is expected to be completed and submitted to Esper by the end of July. A total of roughly 74,000 National Guard members were activated across the U.S., the largest domestic deployment in recent history.

From the Trump campaign to the federal government, the president’s staff are spending freely to make their boss feel secure again.

A statue of Jefferson Davis was removed from the rotunda of the Kentucky state Capitol on Saturday.

Lexington Herald Leader: “A panel that oversees statues in the Kentucky Capitol voted 11-1 Friday to remove the controversial statue of Confederacy President Jefferson Davis from the Rotunda, in line with Gov. Andy Beshear’s request.”

“Momentum to relocate it accelerated as recent protests have been held across the country and in Kentucky against racial injustice. Several civil rights leaders and politicians in the state, including Senate Majority Leader Mitch McConnell and Attorney General Daniel Cameron, said the Davis statue should be moved.”

From the conservative National Review: “American history is replete with men and women who gave their last full measure of devotion for the values that the Union flag has proclaimed at home and abroad for nearly a quarter-millennium. Those who led a bloody rebellion against that flag to preserve an economy of human subjugation were traitors to the nation our military serves; they don’t deserve to be honored.“

“A new tremor is threatening to shake minority communities as protests over racial injustice sweep the country: A wave of evictions as a federal moratorium on kicking people out of their rental units expires,” Politico reports.

“The ban on evictions — which applies to rentals that are backed by the government — expires in a matter of weeks. On top of that, the federal boost to unemployment benefits that many laid-off workers have used to pay their rent is set to end July 31.”

“Black and Latino people are twice as likely to rent as white people, so they would be most endangered if the protection from removal is ended. But there’s no relief in sight from Congress, with Republicans and Democrats not even expected to begin negotiating a new economic relief package until after the July Fourth holiday.”

“North Korea on Friday said that two years of diplomacy with President Trump had ‘faded away into a dark nightmare,’ and vowed to increase its nuclear weapons capabilities,” the New York Times reports.

Former Senate Majority Leader Harry Reid (D-NV) told the Washington Post that he is in “complete remission” after being diagnosed with pancreatic cancer in November 2018.

Reuters: The Trump administration plans to reinterpret a Cold War-era arms treaty in order to allow U.S. defense contractors to sell armed drones to governments that been previously barred from buying them. U.S. agencies including the Commerce, Energy, Justice, and Homeland Security departments all approved the new interpretation in May. The change to the 33-year-old Missile Technology Control Regime is scheduled for review by the White House National Security Council at its June 16 meeting, and the State Department expects to approve the first drone sales under the new interpretation this summer.

Filmmaker and journalist Daniel Lombroso spent nearly four years embedded with the alt-right to make the documentary White Noise, in an effort to understand why the white-nationalist movement appeals to many younger Americans. Both of Lombroso’s grandmothers are Holocaust survivors, making the project deeply personal. In spending hundreds of hours with conspiracy theorists, far-right influencers, and white-nationalist-leaning politicians, Lombroso found the movement’s leaders to be well-educated and wealthy, with a message of historical grandeur and a(n empty) promise of a better future for their followers. It’s tempting to chalk racist extremism up to ignorance, but the reality is more complicated, and defeating hate movements will require understanding how they gained a foothold in the first place.

The Louisville, KY, Metro Council has passed Breonna’s Law, a ban on no-knock warrants named for Breonna Taylor. (Good, but not a substitute for arresting the police officers who killed her.)

New York lawmakers have passed the Eric Garner Anti-Chokehold Act, which criminalizes the use of chokeholds that result in injury or death.

Jamelle Bouie at the New York Times: “To Overturn Trump, We Need to Overturn White Supremacy. For that to happen, some monuments — and the historical myths they supported — are going to have to come down.

Another way to put this observation is that police brutality, the proximate cause of these protests, is simply an acute instance of the many ways in which the lives of black Americans (and other groups) are degraded and devalued. And while the most consequential form this degradation takes are material — the Covid-19 crisis, for example, has revealed to many Americans the extent to which black lives are still shaped by a deep racial inequality that leaves them disproportionately vulnerable to illness and premature death — there are also many symbolic statements of black worth, or the lack thereof, out there for all to see.”

Jennifer Rubin at the Washington Post: “Republicans have no response to tackle racism. In an inadvertently honest moment on Tuesday, McConnell declared, “None of us have had the experience of being an African American in this country and dealing with this discrimination, which persists here some 50 years after the 1964 civil rights bill and the 1965 civil rights bill.”

In using the pronoun “us,” McConnell appeared to be speaking on behalf of the 52 non-black Republicans, an odd formulation but a telling acknowledgement that they lack the diversity necessary to appreciate the full American experience. Goodness knows they have made little effort to try to educate themselves about systemic racism — as many continue to deny it even exists.”