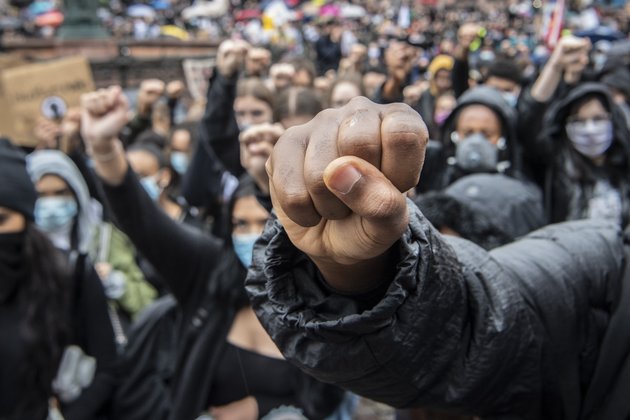 “I think the concept of chokeholds sounds so innocent and so perfect.” — President Trump, in a Fox News interview, on police using chokeholds to restrain citizens.

This was predictable. By next week, the President will start defending the murdering cops.

Trump also suggested Harris Faulkner in a Fox News interview that the Civil War ended questionably. Said Trump: “I think I’ve done more for the black community than any other president, and let’s take a pass on Abraham Lincoln because he did good, although it’s always questionable, you know, in other words, the end result.”

Faulkner, who is black, interjected: “Well, we are free, Mr President, so he did pretty well.”

Who the fuck knows what Trump means here. Is he suggesting that Lincoln is not good because he was assassinated? Is he suggesting the end result was questionable because the United States of America won the war, instead of the treasonous slave masters? Either way, he is saying that he is better than Lincoln when it comes to African Americans. And on that, he is absolutely insane.

The Trump administration has finalized a rule that rolls back nondiscrimination protections for LGBTQ people in health care and health insurance, putting transgender people at particular risk for being denied care in the middle of a pandemic.

Joe Biden said that he supports scrubbing Confederate leaders’ names from all military assets, putting him at odds with President Trump who this week came out in opposition to renaming the 10 military bases named after Confederate soldiers, Politico reports.

Said Biden: “The names affixed to our military installations must honor the diverse heritage of leadership and sacrifice in our country’s history. I fully support Senator Warren’s bipartisan effort to form a commission to rename Defense Department facilities named after Confederate leaders in the next three years, and look forward to implementing the commission’s work as president.”

New York Times: “Yet with public opinion shifting quickly on racism in America, and even some of the most cautious leaders and institutions talking openly about discrimination and reconciliation, there is still one glaring outlier: President Trump.”

“Whether it is suggesting shooting protesters or siccing dogs on them, pre-emptively defending the Confederate names of military installations or arguing that his supporters ‘love the black people,’ Mr. Trump increasingly sounds like a cultural relic, detached from not just the left-leaning protesters in the streets but also the country’s political middle and even some Republican allies and his own military leaders.”

Susan Glasser: Trump hates losers, so why is he refighting the Civil War on the losing side?

“Florida’s former top coronavirus data scientist has launched a website showing far more COVID-19 information than she said the state allowed her to report as an employee, including statistics contradicting Florida’s official coronavirus numbers and the push to reopen the state,” the Palm Beach Post reports.

Washington Post: “The whiplash at Trump’s D.C. hotel is emblematic of the problems faced by his company, which was already suffering from a tarnished brand before the novel coronavirus hit. The fresh wave of political anger directed toward Trump complicates an already difficult recovery for the company.”

“Interviews with current and former Trump Organization employees and tenants, and emails obtained by The Washington Post, show the pandemic in particular has rattled operations at the company. As thousands of Trump’s hotel rooms empty, the company laid off or furloughed more than 2,800 employees and scoured for even the smallest savings. It eliminated flowers, chocolates and newspapers at its New York hotel and turned off lights in common areas in its Chicago hotel to save on electricity, according to letters that hotel management sent to investors.”

Writes Bolton: “I am hard-pressed to identify any significant Trump decision during my tenure that wasn’t driven by re-election calculations.”

Axios has more on John Bolton’s book, which is being blocked from publication by the White House, reporting that Bolton will go beyond Ukraine, and argue there was “Trump misconduct with other countries.”

“People close to Trump have been worried about the book because Bolton was known as the most prolific note taker in high-level meetings… Bolton would sit there, filling yellow legal pad after yellow legal pad with notes.”

Ohio state Rep. Steve Huffman (R) was fired from his ER doctor position after asking if “the colored population” may be hit harder by the coronavirus pandemic because they possibly “don’t wash their hands as well as other groups,” The Hill reports.

Timothy O’Brien reports that Donald Trump said on his own syndicated radio show in 2005 that although the idea was “fairly controversial,” he wanted The Apprentice to host “a team of successful African-Americans versus a team of successful whites. Whether people like that idea or not, it is somewhat reflective of our very vicious world.”

Said Trump: “And it would be nine blacks against nine whites, all highly educated, very smart, strong, beautiful. Do you like it?”

Oregon Gov. Kate Brown (D) announced Thursday evening that she has put all applications for further reopening across the state on hold for at least seven days after seeing a “concerning” increase in coronavirus infections, the Oregonian reports.

President Trump told Fox News he was “fine” with the Pentagon’s two top leaders distancing themselves from his photo op in front of a church last week, which was made possible by the violent dispersal of peaceful protesters outside the White House.

Said Trump: “I mean, I — if that’s the way they feel, I think that’s fine. I have good relationships with the military. I’ve rebuilt our military.”

Yascha Mounk: “A second wave of the coronavirus is on the way. When it arrives, we will lack the will to deal with it. Despite all the sacrifices of the past months, the virus is likely to win—or perhaps it would be more accurate to say that it already has.”

“In absolute terms, the United States has been hit harder than any other country. About a quarter of worldwide deaths have been recorded on these shores. And while the virus is no longer growing at an exponential rate, the threat it poses remains significant: According to a forecasting model by Morgan Stanley, the number of American cases will, if current trends hold, roughly double over the next two months.”

“Even so, the disease is slowly starting to recede from the public’s attention… Perhaps most important, it is now difficult to imagine that anybody could muster the political will to impose a full-scale lockdown for a second time.”

“The White House is floating a theory that travel from Mexico may be contributing to a new wave of coronavirus infections, rather than states’ efforts to reopen their economies,” the AP reports.

“The notion was discussed at some length during a meeting of the administration’s coronavirus task force in the White House Situation Room Thursday that focused, in part, on identifying commonalities between new outbreaks.”

White House economic adviser Larry Kudlow told Fox & Friends that there was no “second wave” of the coronavirus descending upon the country, even as infections are spiking in more than a dozen states.

Washington Post: “Inside Trump’s orbit, several of the president’s aides are frustrated that some of his crafted statements on the recent unrest have been eclipsed by his incendiary tweets or remarks. Some also regret the decision on June 1 to use force to clear Lafayette Square of protesters before he staged a photo op in front of St. John’s Episcopal Church…”

“One administration official, who like others spoke on the condition of anonymity to discuss internal dynamics, expressed frustration that Trump was gratuitously weighing in on Confederate memorials and a protester getting shoved to the ground in Buffalo, as well as unnecessarily attacking rivals like Sen. Mitt Romney (R-UT), who marched in a Black Lives Matter protest over the weekend. The official added that Trump is mainly surrounding himself with a small knot of aides and even then is often not following their advice.”

Said one GOP strategist: “If he was trying to lose, he’d be doing basically what he is doing right now.”