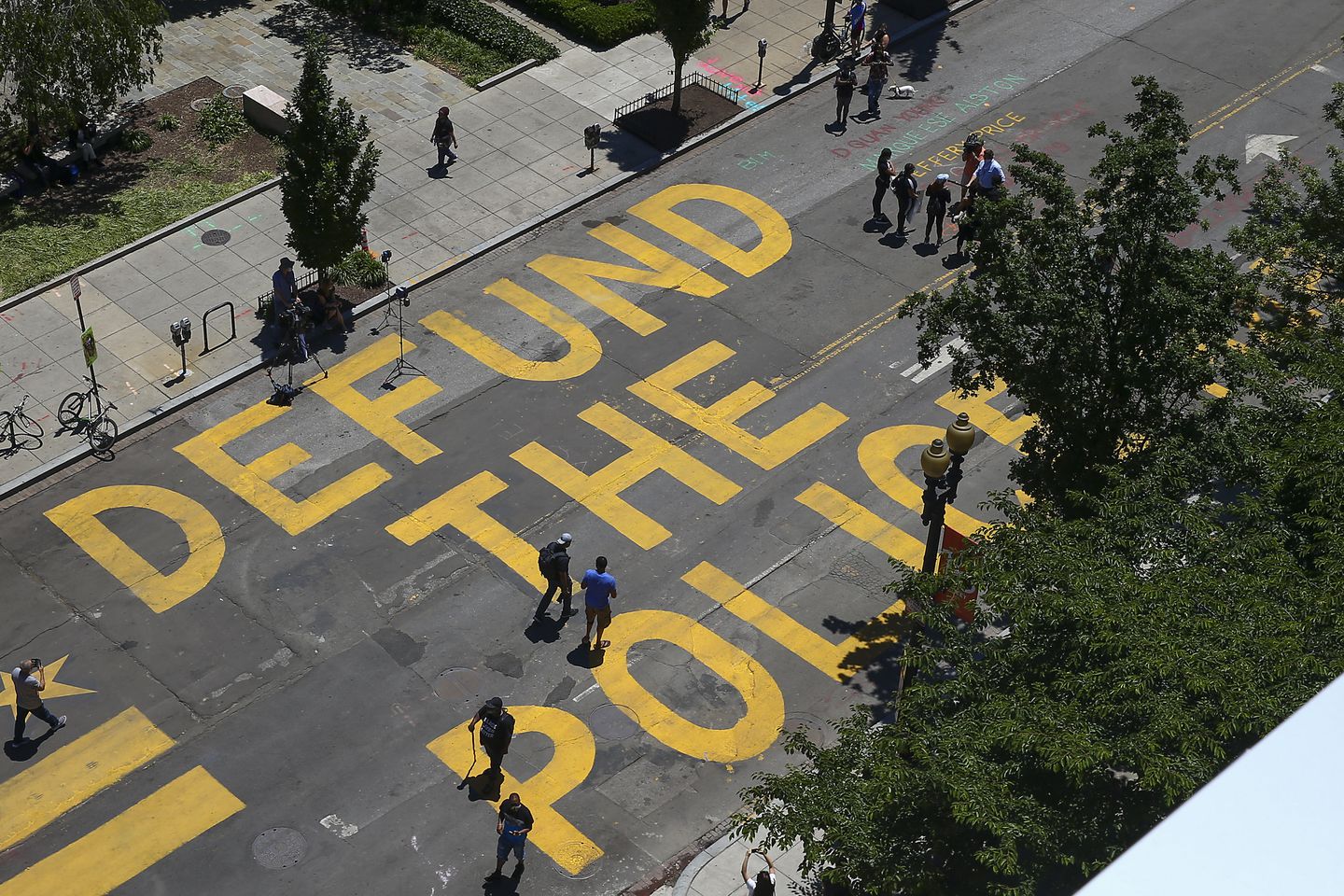 A new Yahoo News/YouGov poll finds that 52% of Americans agree that it is fine for NFL players to kneel during the national anthem to protest police killings of African Americans. Just 36% of respondents say it’s inappropriate and 12% were not sure. In 2018, only 35% agreed with players’ right to protest.

A new ABC News/Ipsos poll finds nearly two-thirds of Americans oppose calls for defunding police departments, compared to 34% who back the movement, and 60% specifically oppose reducing the budget for police to reallocate it to other public health and social programs, while 39% support that move.

If you have to spend 10 minutes explaining your slogan you have already lost.

“The Republican National Committee’s executive committee voted Wednesday night to scale back its 2020 convention proceedings in light of the coronavirus outbreak. Perhaps as interestingly, it also voted to make no changes to its 2016 party platform ahead of the 2020 election,” the Washington Post reports.

“The move is notable because it means the party won’t change its official positions on issues such as same-sex marriage and will allow them to stand through 2024.”

“But it’s also notable because some of the language in the platform decrying what the ‘current administration’ and ‘the president’ have done can just as easily be used against the current occupant of the White House.”

“A vote by the Republican National Committee to leave the party’s 2016 party platform unchanged ahead of the November election has infuriated grass-roots activists — including moderates who wanted to streamline its message and social conservatives who sought added language on emerging hot-button topics,” Politico reports.

Two sources told Vanity Fair that Rupert Murdoch has recently told people that he believes Donald Trump is going to lose the election in November.

Said one source: “Rupert thinks Trump is going to crash and burn. It’s a clear-eyed assessment, just based on just looking at the news.”

That’s when a mob of 200 white people in the city — organized by the Ku Klux Klan and joined by some of the city’s police officers — chased and beat peaceful civil rights protesters (with ax handles and baseball bats) who were trying to integrate downtown lunch counters.

A permit had already been approved for civil rights activists for the 60th anniversary commemoration of those events.

Joe Biden told the Daily Show that his single greatest concern is that President Trump will “try to steal this election.”

Biden added that in a scenario where Trump refuses to relinquish power after losing, the military would intervene: “I am absolutely convinced they will escort him from the White House with great dispatch.”

“If this election were held today, it would be Biden by double digits, easy. Things could change, but they generally don’t.” — Democratic strategist James Carville, quoted by McClatchy.

Stacey Abrams told the Late Show with Stephen Colbert that she has not been asked by Joe Biden’s campaign for any materials required in vetting potential running mates.

Said Abrams: “I have said many times that if called I will answer but I’ve not received any calls.”

John Avlon: “President Trump’s political ‘strategy’ has always been based on negative partisanship. He does not appear to believe in the politics of addition, but in the politics of division. It’s a two-part play: he demonizes Democrats to fire up the base while trying to convince just enough swing voters that he’s a proudly politically incorrect counterweight to liberal extremism.”

“For the better part of a year, those attacks could be summed up in one word: ‘socialism.’ But the S-word has basically disappeared from Trump’s vocabulary in recent months.”

“Check it out: In the second half of 2019 alone, Trump used the words ‘socialist’ or ‘socialism’ more than 100 times on Twitter or in speeches, according to the folks at Factbase. In January, he used the S-word 30 times — in February, 34 times — the equivalent of more than once a day.”

“Then things fell off a cliff: Trump invoked the bogeyman of socialism only four times in March, one time in April and a grand total of zero times in May.”

Washington Post: “While Harris is championed by Democratic officeholders and leaders, who see her as appealing to suburban and centrist voters, many of the activists who have helped energize the street protests warn that party figures are missing the mood of the moment. As a traditional politician and former prosecutor, they say, Harris would fail to capture the passions that are powering the protests, and her selection could dampen the excitement that is crucial to the Democrats in November.”

Jonathan Bernstein: “Kudos to the NBC News political team for a very good item about counting ballots in November’s elections. As the team explains, it’s going to take a week or more to get a complete vote tally this year. That’s simply the system that has evolved, and it is now even more complicated thanks to an expected surge in absentee voting during the pandemic. As NBC puts it, we’re likely to have ‘Election Week’ rather than ‘Election Night.’”

“The one thing NBC doesn’t mention is that in most slow-count states, the normal pattern is for Democratic votes to come in late. There’s nothing nefarious about this; it’s just that different groups vote in different ways and in many states Democrats tend to vote late and by mail, meaning that their votes are often underestimated on Election Night. Arizona and Pennsylvania usually exhibit this pattern. Both could easily show a small Republican lead after the initial count that experts know will disappear, and it would boost confidence in the process if more people knew that ahead of time.”

Sen. Bernie Sanders (I-VT) told the New Yorker he has “a better relationship” with Joe Biden than he had with Hillary Clinton.

Said Sanders: “I think the difference now is that, between you and me, I have a better relationship with Joe Biden than I had with Hillary Clinton. And that Biden has been much more receptive to sitting down and talking with me and other progressives than we have seen in the past.”

The Atlantic: “In what appears to be a signal of intensifying political warfare ahead of the November election, One America News Network, the Trump-supporting cable channel that has been promoting anti-Biden conspiracies for several months, says it has obtained several hours of secret recordings of then–Vice President Biden’s conversations with Ukrainian officials.”

“If such recordings exist, they’re likely linked to pro-Russian interests in Ukraine and a Russian intelligence operation, two former U.S. ambassadors to Ukraine and a former ambassador to Russia told me. The OAN employee who claims to have the tapes would not say what was on them, other than suggesting that they will be revelatory.”