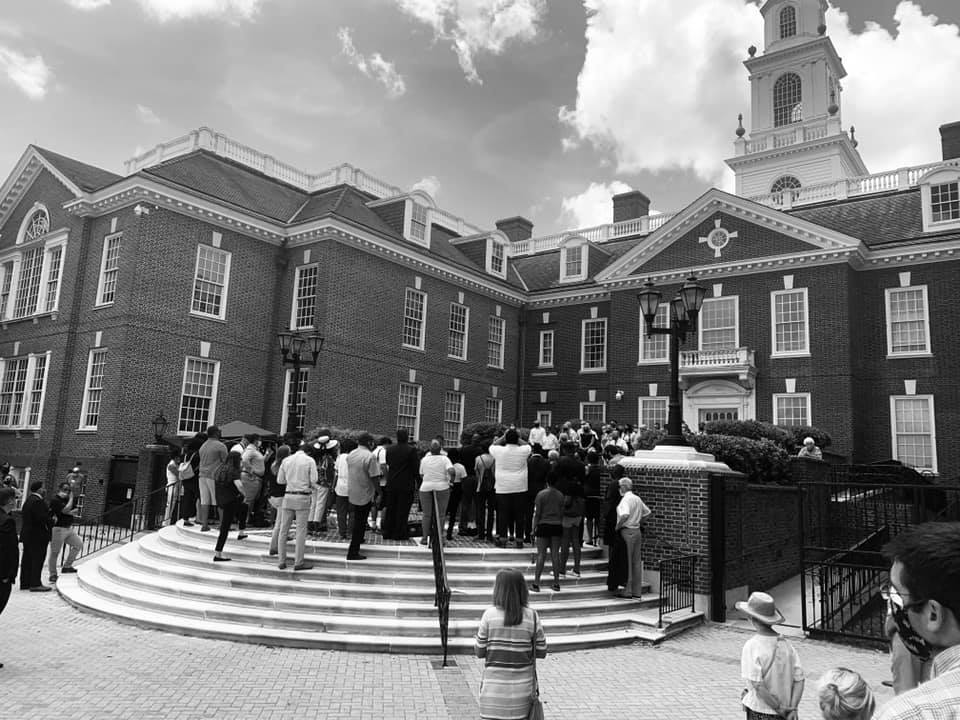 The Delaware Legislative Black Caucus, accompanied by nearly half of the General Assembly behind them, announced a Justice For All Agenda of legislative priorities to address the systemic racial injustice and police brutality in the state that has become, finally, a national concern following the murder of George Floyd in Minneapolis and the outrageous acts of police brutality used against protesters across the country in the wake of that murder.

Here is the livestream of the news conference:

The agenda includes proposals that seek to protect Delawareans from discrimination, create model policies and enhanced accountability for police departments throughout the state and set the stage for future social justice reforms.

“We, as the Delaware Legislative Black Caucus, are acutely aware of our policymaking role, and the opportunity before us to improve public systems and eliminate the disparate impact felt by black and brown Delawareans served by them,” the 8-member, bicameral caucus said in a joint statement.

“In this moment, we believe our actions to do so will speak much louder than our words. As such, we’re presenting the following Justice for All Agenda to work with our colleagues to expand our efforts beyond what is already underway and respond to the urgency we feel ourselves and see expressed by our constituents.”

The agenda announced Wednesday is the result of a collaborative effort between the Delaware Legislative Black Caucus, leaders of the General Assembly, the Governor’s Office, the Delaware Department of Justice, the Office of Defense Services and other interested groups. The Justice for All Agenda includes, but is not limited to, the following:

Governor John Carney: “It’s our obligation as leaders and elected officials to make sure that the relationship between law enforcement and communities of color in Delaware improves. And it’s our obligation to get serious about addressing the issues of inequality that are giving rise to racial justice demonstrations in Delaware and across our country. The anger and frustration are real. We should recognize the ugly history around race in Delaware and across our country, and work together in good faith to make meaningful change.”

Attorney General Kathy Jennings: “Systemic racism is alive and well in America. This is a time of tremendous pain for our country, particularly for Black and Brown Americans who have suffered a seemingly endless march of brutality and tragedy. But it’s a time of equally tremendous hope. It has been decades since I’ve seen a moment like this – one where righteous anger is married to the motivation for timely change. I am in awe of what I am witnessing in our country – and I know the gravity of our decisions in this moment. This is not a time for bunker mentalities or for special interests to hold sway. It’s time for us to capture this moment, to show the courage to change, and to prove that Black lives matter to us.”

Delaware Senate President Pro Tempore David McBride: “We must do more to make our criminal justice system fair and equitable, and I fully support the agenda put forward today. Last year, I co-sponsored over a dozen criminal justice reform bills and I pledge to continue our work to balance the scales and create a system that truly guarantees justice for all.”

Former police officer and current House Speaker Pete Schwartzkopf: “The conversations that we are beginning today are going to be difficult and uncomfortable for many of us to have, but we must have them. These discussions have to be painful to be meaningful. We must make the changes that thousands of Delaware residents are demanding right now. I believe that the steps we are discussing today have the potential to be transformative. Instead of incremental change, we can work together to take bold leaps forward toward a more just and equitable system for all. It won’t be perfect, and it will be messy at times, but we must be honest and continue working toward our goal.”

Wilmington Mayor Mike Purzycki: “Wilmington has heard the voices calling for change and reform. The massive worldwide movement to eliminate egregious police actions against people of color will continue until there is more respect and understanding for each other through policies and actions that produce racial justice. No person of color should ever have to fear a police officer or expect anything but equal treatment and justice. Wilmington’s policing policies are open for review, and while we have already implemented widely accepted policing standards, we will continue to make additional changes as needed.”

Brendan O’Neill, Chief Defender at the Office of Defense Services: “I’ve been a defense attorney for decades and my experience has taught me that oftentimes the criminal justice system is neither fair, nor color blind, nor balanced. These proposed reforms are a start at tackling the systemic racism and inequity that plague our criminal justice system. Our office represents roughly 85 percent of criminal defendants in Delaware and the majority of our clients are people of color. They are at a disadvantage the minute they come into police contact. We need to fix that. This is a good first step.”

Photo above by Sarah Grace Fulton.