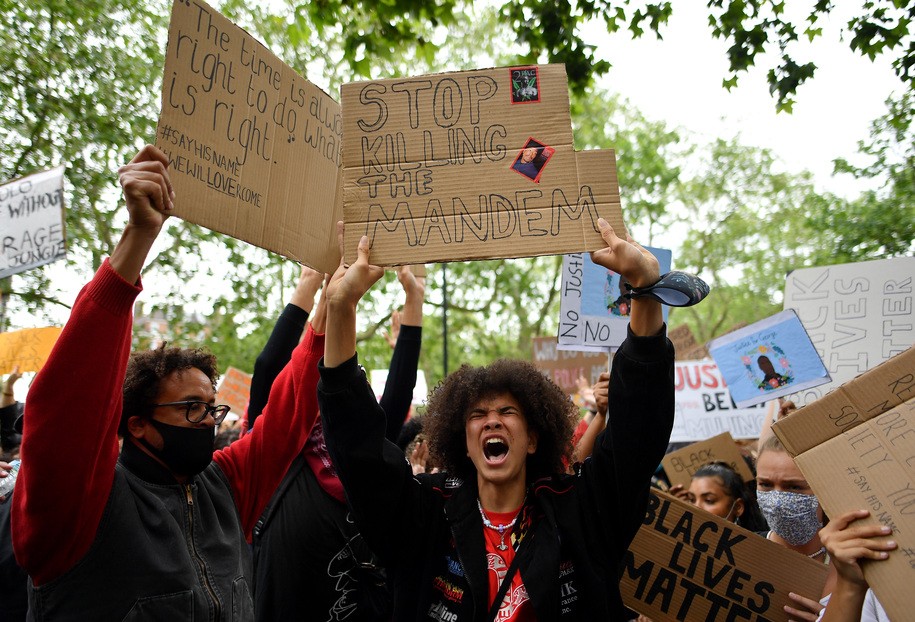 Wall Street Journal: “U.S. coronavirus deaths have surpassed 100,000 and health experts say the pandemic remains a serious concern, but Mr. Trump and his advisers have made a strategic decision to shift focus, according to administration officials and others familiar with the matter. The move predates the nationwide protests following the killing of a black man in Minneapolis police custody, which have captured the attention of both the American public and the White House—and brought tens of thousands out of lockdown.”

“The president and his aides have turned to issues they believe will animate the president’s conservative base ahead of the election while projecting confidence that the country is recovering economically.”

“What he actually did — as you saw for the remaining days — was turn out more people and more people who were there for peaceful protests.”

“Joe Biden will travel on Monday to Houston to meet with the family of George Floyd, a black man whose death at the hands of the police touched off a nationwide outcry over racism and police brutality,” the New York Times reports.

“Mr. Biden, the presumptive Democratic presidential nominee, will offer his condolences to members of the Floyd family and will also record a video message for Mr. Floyd’s funeral service on Tuesday, according to a Biden aide. Mr. Biden is not expected to attend the service — given his Secret Service protection, there were concerns about creating a disruption — but he wanted to offer in-person condolences.”

Protesters booed Mayor Jacob Frey and told him to leave the protest after he said he supported police reform but not abolishing the department altogether.

James Bennet has resigned as editor of the New York Times’ editorial page.

Axios: “Bennet had been under fire for green-lighting an op-ed by Sen. Tom Cotton (R-AR) that called on President Trump to ‘send in the troops’ in order to quell violent protests over the death of George Floyd. Times employees organized a protest on social media and claimed that publishing the op-ed put black staff in danger.”

Mercedes Schlapp, a senior adviser to the Trump campaign, retweeted a video of a man brandishing a chainsaw at anti-racism protesters and screaming the N-word multiple times, Politico reports.

She later deleted the tweet and issued an apology, claiming she had retweeted without watching the video.

Retired Gen. Colin Powell, the secretary of state under former President George W. Bush, told CNN he will be voting for Joe Biden. Said Powell: “I certainly can not in any way support President Trump this year.”

Powell said Trump “has not been an effective president” and “lies all the time,” starting with his first day in office about the size of the crowd at his inauguration.

The New York Times reports that former President George W. Bush won’t endorse — or vote for — Donald Trump for President. In response to the report, a senior Bush aide told NBC News that the former president hasn’t indicated how he will vote.

Dr. Anthony Fauci said that many of the protests against racism and police brutality taking place across the country, involving congregation of large crowds, raises the risk for transmission of the coronavirus, Business Insider reports.

Said Fauci: “It is a perfect set-up for the spread of the virus in the sense of creating these blips that might turn into some surges.”

A U.S. Park Police spokesperson told Vox it was a “mistake” to insist that it didn’t use tear gas the day before in Lafayette Square to disperse a crowd ahead of President Trump’s photo op, explicitly noting that pepper balls shot by officials irritate the eyes and cause tears.

“President Trump has directed the Pentagon to remove thousands of U.S. troops from Germany by September,” the Wall Street Journal reports.

“The move would reduce the U.S. troop presence in Germany by 9,500 troops from the 34,500 troops that are permanently assigned there.”

Vox: “Two police officers seen in a viral video shoving a 75-year-old man to the ground in Buffalo, New York, were charged with second-degree assault on June 6. The officers, Aaron Torgalski, 39, and Robert McCabe, 32, have pleaded not guilty and have been released without bail, but if convicted, they could face a maximum of seven years in prison.”

Law-enforcement agents seized hundreds of masks that were meant to protect anti-racist protesters from coronavirus. The Movement for Black Lives (M4BL) spent tens of thousands of dollars on cloth masks that read “STOP KILLING BLACK PEOPLE” and “DEFUND POLICE,” which the organization planned to ship all over the country. As of this morning, the first four boxes hadn’t made it out of California—the Postal Service tracking numbers indicated that they were “Seized by Law Enforcement,” with no further explanation. Federal agents released the shipments hours after HuffPost reported the story, which is how you know this was all normal and above board. It’s not yet clear which agency seized the masks, but it falls in line with the Justice Department’s larger, more violent crackdown on the protests, which includes increased surveillance. It’s apparently not enough to target citizens with tear gas or rubber bullets, now the government is stealing masks that would protect its own people from a deadly virus.

“I think there’s racism in the United States. But I don’t think that the law enforcement system is systemically racist.”

Two major medical journals have retracted separate hydroxychloroquine studies over concerns about the reliability of the underlying data. The Lancet and the New England Journal of Medicine each retracted a study, both of which cast doubt on the drug’s viability as a coronavirus treatment, and both of which were linked to the same obscure data firm, which refused to share its full data set. The retractions don’t mean that hydroxychloroquine is actually effective—other studies have found similar results—but it’s a huge mess: Several countries and the WHO paused ongoing studies based on the Lancet’s article.