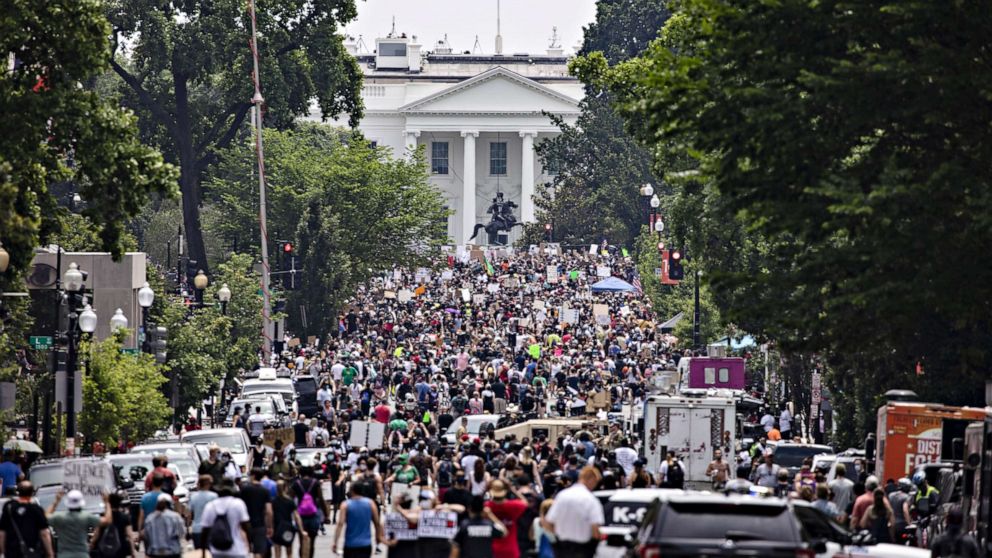 “A sweeping new police reform bill being drafted by House and Senate Democrats would ban chokeholds, limit ‘qualified immunity’ for police officers, create a national misconduct registry, end the use of no-knock warrants in drug cases and make lynching a federal crime among other dramatic changes,” Politico reports.

George Conway: “It’s more than just narcissism that drives this failing, flailing president. However difficult they can be, even extreme narcissists can have consciences. They don’t necessarily cast aside behavioral standards or laws, or lie ceaselessly with reckless abandon. Trump’s behavior is conscienceless, showing utter disregard for the safety of others, consistent irresponsibility, callousness, cynicism and disrespect of other human beings. Contempt for truth and honesty, and for norms, rules and laws. A complete inability to feel remorse, or guilt. As a New Yorker profile of Trump put it nearly a quarter-century ago, Trump lives ‘an existence unmolested by the rumbling of a soul.’ That’s Donald Trump’s problem yesterday, today and tomorrow.”

“It’s our problem, too, for now: We remain governed by a soulless man with a broken mind. The damage will continue, and it won’t stop until voters end it. Come November, it will be up to the eligible human population of this country to look to their souls, their consciences, their humanity — and to cast their votes for one of their own.”

“The CDC released data from a survey commissioned to understand why more people have been calling poison control centers during the coronavirus pandemic,” Axios reports.

“Roughly 200 adults who responded to the survey in May said they intentionally inhaled disinfectants, washed food with bleach, or applied household cleaning products to bare skin to combat the virus — all of which are dangerous.”

New Yorker: “The country didn’t just manage to flatten the curve; it virtually eliminated it.”

“President Trump and his team are heralding a summer of economic recovery — a dramatic turnaround that will become the centerpiece of his pitch to voters, casting aside attention on nationwide protests and the coronavirus pandemic,” Politico reports.

“Many fellow Republicans — and Democrats burned by hopeful economic messaging a decade ago — view the coming months with far greater caution, warning about a chest-thumping declaration of victory.”

Washington Post: “There are few constants in the tumult of the Trump administration, which has had far more staff departures than any recent president. But one rule of thumb is that if you speak ill of Trump — and a remarkable number of former officials have — the president will strike back.”

“But beyond illustrating Trump’s counter punching ethos, it’s a pattern that raises serious questions about his ability to fill some of the most important posts in government and why he continually hires top officials he later comes to describe as incompetents.”

“General Mattis’s comments yesterday, I felt like perhaps we’re getting to the point where we can be more honest with the concerns that we might hold internally and have the courage of our own convictions to speak up.”

— Sen. Lisa Murkowski (R-AK), quoted by the Washington Post, suggesting she’s not the only GOP senator with concerns about President Trump.

“Hospitalizations in Arizona of patients with suspected and confirmed COVID-19 have hit a new record and the state’s largest health system has reached capacity for patients needing external lung machines,” the Arizona Republic reports.

“When the U.S. government’s official jobs report for May came out on Friday, it included a note at the bottom saying there had been a major ‘error’ indicating that the unemployment rate likely should be higher than the widely reported 13.3 percent rate,” the Washington Post reports.

“Top Pentagon officials ordered National Guard helicopters to use what they called ‘persistent presence’ to disperse protests in the capital this week, according to military officials,” the New York Times reports.

“The loosely worded order prompted a series of low-altitude maneuvers that human rights organizations quickly criticized as a show of force usually reserved for combat zones.”

“Facebook chief Mark Zuckerberg said Friday the social media giant will reexamine its policies against violent threats and voter suppression after facing intense backlash over its recent handling of incendiary posts by President Donald Trump, particularly from its own employees,” Politico reports.

“NFL Commissioner Roger Goodell said Friday he and the league strongly support players expressing their opposition to inequality and police misconduct, saying the league’s leadership was ‘wrong’ for ignoring players earlier and that it now endorses their peaceful protests,” the Washington Post reports.

Attorney General William Barr told the AP “that law enforcement officers were already moving to push back protesters from a park in front of the White House when he arrived there Monday evening, and he says he did not give a command to disperse the crowd, though he supported the decision.”

“Barr’s comments were his most detailed explanation yet of what unfolded outside the White House earlier this week. They come after the White House and others said repeatedly that the attorney general ordered officers to clear the park.”