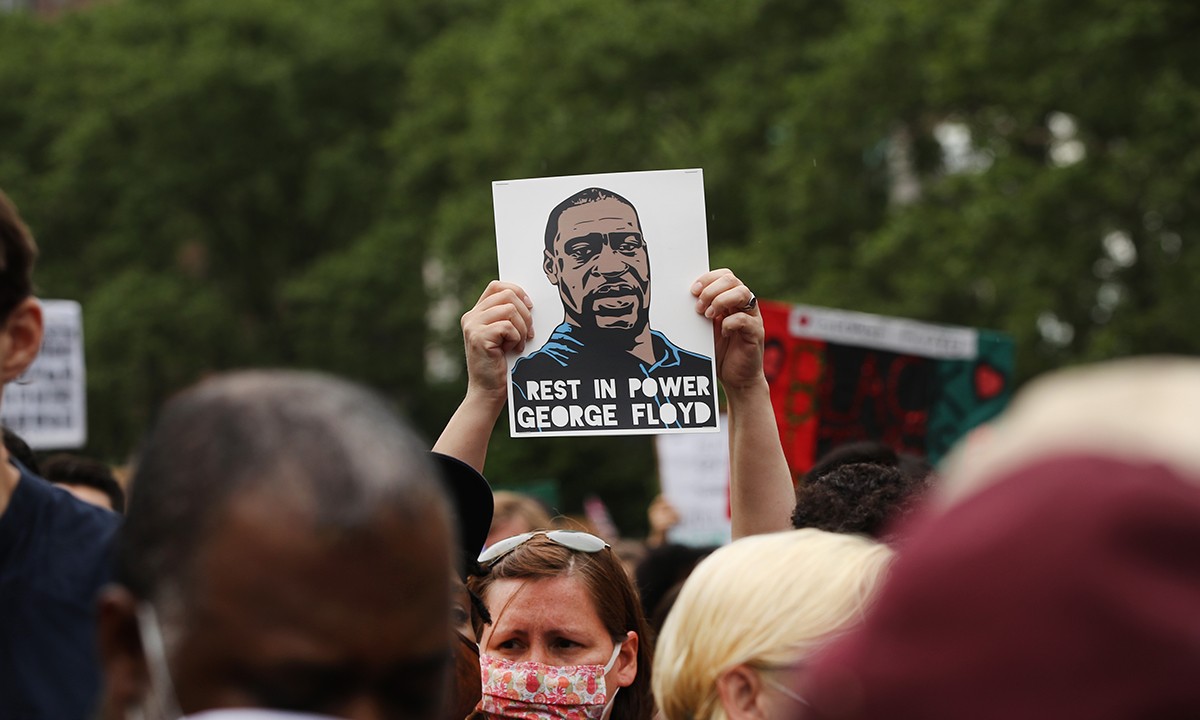 President Trump said his plan to address racism is a strong economy, after he was pressed on whether he has a plan to end systemic racism in the country, the Washington Post reports.

He’s dead, Donald. That’s not a great day for him.

“Employment unexpectedly rose by 2.5 million in May and the jobless rate declined to 13.3% according to data Friday from the Labor Department that was far better than economists had been expecting and indicated that an economic turnaround could be close at hand,” CNBC reports.

Washington Post: “In Mattis’s eyes, the appearance of the two top military leaders appeared to condone an unprovoked use of force. The nonpartisan military that Mattis had served for nearly five decades was being featured as decoration for a photo op, and Mattis fumed that the president was using the leaders who replaced him at the Defense Department to further divide the nation, according to four people familiar with his thinking.”

“He was especially upset to see Milley — whom Mattis believed had sought to curry favor with Trump when he was defense secretary — appear in his Army combat uniform at a peaceful demonstration. That jarring image highlighted the military’s involvement in a heavy-handed crackdown on civilians.””

“With that, the military historian and retired Marine general decided it was time to call out the damage he saw Trump doing to the country.”

Former White House chief of staff John Kelly said he agrees with former Secretary of Defense Gen. Jim Mattis’ stark warning this week that President Donald Trump is “the first president in my lifetime who does not try to unite the American people,” CNN reports.

“An anti-lynching bill that Sen. Rand Paul (R-KY) has held up in the Senate for several months led to a heated and passionate battle on the Senate floor Thursday, pitting the Kentucky Republican at odds with two of the Senate’s three black members over changes to the bipartisan legislation,” USA Today reports.

“The emotional debate centered on the Emmett Till Anti-lynching Act, which passed the House in a bipartisan 410-4 vote in February and would make lynching a federal crime.”

President Trump tweeted out a letter that referred to a group of protesters as “terrorists,” following their violent ouster from a park near the White House earlier this week, Politico reports.

The letter is signed by Trump’s former lawyer John Dowd and addressed to “Jim” in a probable reference to former Defense Secretary Jim Mattis.

“President Trump agreed on Thursday to begin sending home 82nd Airborne Division troops he had ordered to Washington, temporarily easing a contentious standoff with the Pentagon over the role of the armed forces in quelling protests that have broken out across the nation,” the New York Times reports.

“Defense Secretary Mark T. Esper initially tried to send home a small portion of the 1,600 active-duty troops on Wednesday, only to have Mr. Trump order him to reverse course during an angry meeting.”

“What appeared on Thursday to be an uneasy truce between the White House and Pentagon did not mean that the conflict was over. While Mr. Trump’s advisers counseled him not to fire Mr. Esper, the president spent much of the day privately railing about the defense secretary.”

“The Pentagon has told the District of Columbia National Guard and guardsmen from other states who have arrived in the nation’s capital as backup to not use firearms or ammunition, a sign of de-escalation in the federal response to protests in the city after the killing of George Floyd,” the Washington Post reports.

“The Department of Defense, led by Defense Secretary Mark Esper, appears to have made the decision without consulting the White House… Trump specifically had encouraged the National Guard to be armed.”

“Few sights from the nation’s protests in recent days have seemed more dystopian than the appearance of rows of heavily armed riot police around Washington, D.C., in drab military-style uniforms with no insignia, identifying emblems or names badges. Many of the apparently federal agents have refused to identify which agency they work for,” Politico  reports.

“To understand the police forces ringing Trump and the White House it helps to understand the dense and not-entirely-sensical thicket of agencies that make up the nation’s civilian federal law enforcement. With little public attention, notice and amid historically lax oversight, those ranks have surged since 9/11—growing by roughly 2,500 officers annually every year since 2000. To put it another way: Every year since the 2001 terrorist attacks, the federal government has added to its policing ranks a force larger than the entire Bureau of Alcohol, Tobacco, Firearms and Explosives (ATF).”

“The security perimeter around the White House keeps expanding. Tall black fencing is going up seemingly by the hour. Armed guards and sharpshooters and combat troops are omnipresent,” the Washington Postreports.

“In the 72 hours since Monday’s melee at Lafayette Square, the White House has been transformed into a veritable fortress — the physical manifestation of President Trump’s vision of law-and-order “domination” over the millions of Americans who have taken the streets to protest racial injustice.”

“The White House is now so heavily fortified that it resembles the monarchical palaces or authoritarian compounds of regimes in faraway lands.”

“A leaked Trump administration document details the federal law enforcement and military personnel squaring off against protestors in Washington, D.C., including a 1,300-strong force currently deployed to the south side of the White House,” Yahoo News reports.

“Thousands of federal enforcement and military personnel have been called to Washington to respond to growing demonstrations sparked by the death of George Floyd… but the Trump administration has so far refused to disclose many of the details about who is policing the nation’s capital.”

“An internal report obtained by Yahoo News shows which agencies are involved.”

Just Security: “‘We train our boys to be killing machines,’ President Trump declared on Twitter in October 2019. He meant it as a compliment—and, as Peter Bergen shows in his powerful new book, Trump and His Generals: The Cost of Chaos, Trump’s sense of military men and women as ‘killing machines’ was what drew Trump to populate his cabinet early on with generals like Michael Flynn, John Kelly, James Mattis, and H.R. McMaster.”

“Yet, in some cases sooner and in some cases later, Trump soured on all of them—and they soured on Trump. (The possible exception is Flynn, but he at least soured enough to cooperate extensively with Special Counsel Robert Mueller’s investigation.)  So, what did Trump think he would get from these generals, and what went wrong?”

“President Trump [forged] ahead with a trip to Maine [yesterday,] defying a direct plea from the state’s Democratic governor to stay home and concerns from Republicans his visit could hurt Senator Susan Collins’ re-election bid,” Bloomberg reports.

A Portland Press Herald editorial: “President Trump: We’re sorry that you decided to come to Maine, but since you are here, could you do us a favor? Resign.”

The New York Times issued a statement saying the op-ed by Sen. Tom Cotton (R-AR) calling for President Trump to send troops into cities to break up protests fell short of the newspaper’s standards.

Jack Shaffer: “You can criticize the page for running Cotton’s retrograde views, which anybody with even a tincture of civil libertarianism running through their veins knows is wrong. But you can’t accuse the page of inconsistency. The 50-year-old section has been outraging or disappointing—depending on your point of view—readers since its founding.”

A video of the protests over George Floyd’s killing in New Rochelle, NY shows what Barack Obama noted earlier this week: The protesters are far more diverse than they were in 1968.

This moment has really awakened more white people to the problem of racism in our country.

“A bitter partisan fight in the Senate Judiciary Committee on Thursday forced its GOP chairman, Lindsey Graham, to delay a vote that would give him unilateral subpoena power in a GOP-led probe of the counterintelligence investigation that led to the appointment of special counsel Robert Mueller,” ABC News reports.

“The move for subpoena authority — which Graham predicted would be approved in a party-line vote next week — would allow him to compel the appearance of more than 50 witnesses, the majority of whom served in the Obama administration.”

“When the students poured into Tiananmen Square, the Chinese government almost blew it. Then they were vicious, they were horrible, but they put it down with strength. That shows you the power of strength.”

Washington Post: “Inside the West Wing, Trump is reticent to pursue a new stimulus package and confident about a revival even as economists and the Federal Reserve chairman push the president and Congress to spend more to address the economic carnage.”

“They said conservatives are urging Trump to hold off on providing relief to states that have been battered by the coronavirus pandemic and telling him to instead focus on securing tax breaks for businesses, reducing regulations and fighting his trade war with China.”