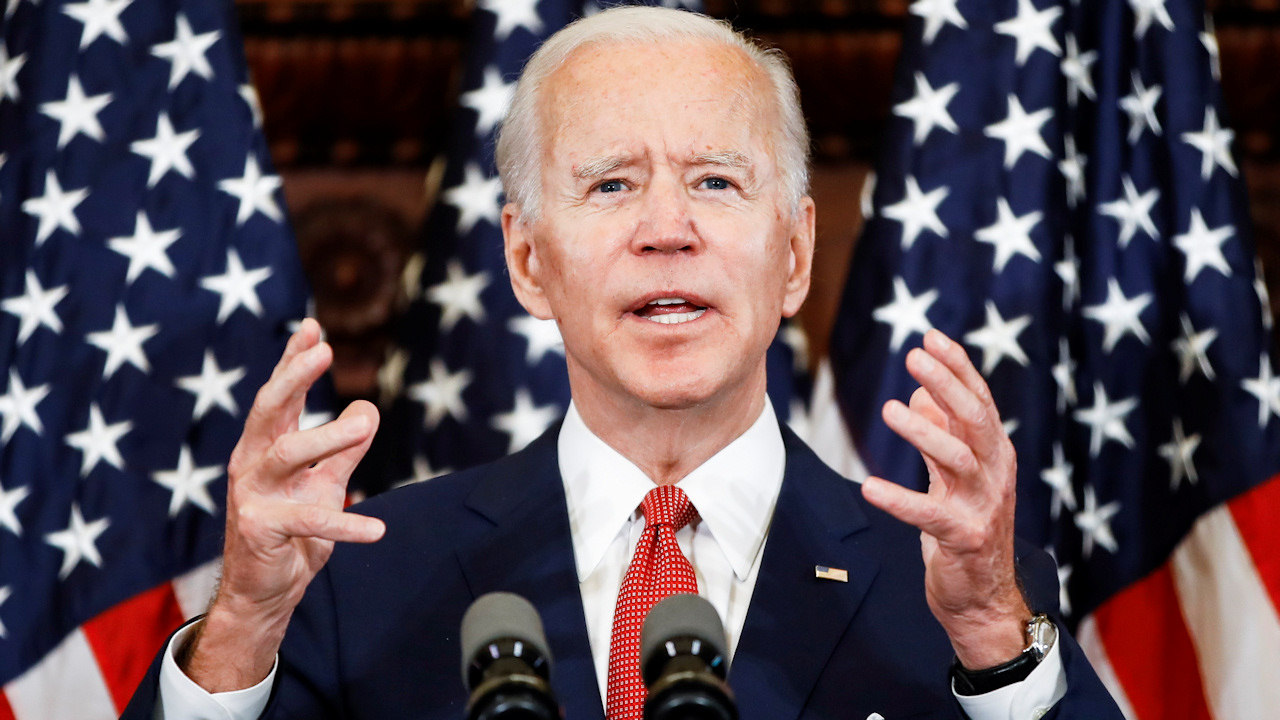 Joe Biden, in speech to the nation, denounced President Trump’s actions against protesters and vowed to heal racial wounds, the Washington Post reports.

Said Biden: “When peaceful protestors are dispersed by the order of the President from the doorstep of the people’s house, the White House — using tear gas and flash grenades — in order to stage a photo op at a noble church, we can be forgiven for believing that the president is more interested in power than in principle. More interested in serving the passions of his base than the needs of the people in his care.”

He added: “Look, the presidency is a big job. Nobody will get everything right. And I won’t either. But I promise you this. I won’t traffic in fear and division. I won’t fan the flames of hate. I will seek to heal the racial wounds that have long plagued this country – not use them for political gain.”

The bottom line: Biden’s small lead over Trump of 2 to 3 points comes from the leaners. He gets 15% of Republican leaners, while Trump gets just 6% of Democratic leaners.

The Civiqs tracking poll finds support for the Affordable Care Act has grown throughout the Trump presidency, a trend that only accelerated with the onset of the coronavirus pandemic in the United States.

The poll now finds 49% of registered voters want the health care law “expanded to do more” while just 36% want it repealed.

But even more interesting is that Trump’s approval is now underwater in every single battleground state — Arizona, Florida, Michigan, North Carolina, Pennsylvania and Wisconsin.

Trump also has a negative net approval rating in several states that were not expected to be close in the 2020 presidential election, including Iowa, Georgia, Texas and Ohio.

A new Civiqs poll in Kansas finds Barbara Bollier (D) in a dead heat in the U.S. Senate race against any Republican nominee.

“Republican officials and strategists warned that if a wide partisan gap over mail voting continues in November, Republicans could be at a disadvantage, an unintended repercussion of the president’s fear-mongering about mail ballots that could hurt his party’s chances, including his own,” the New York Times reports.

“In Pennsylvania, Iowa, Indiana and New Mexico, all states voting on Tuesday that broadly extended the option to vote by mail this year, a higher share of Democrats than Republicans have embraced mail-in ballots.”

“President Trump’s persistent attacks on mail-in voting have fueled an unprecedented effort by conservatives to limit expansion of the practice before the November election, with tens of millions of dollars planned for lawsuits and advertising aimed at restricting who receives ballots and who remains on the voter rolls,” the Washington Post reports.

“The strategy, embraced by Trump’s reelection campaign, the RNC and an array of independent conservative groups, reflects the recognition by both parties that voting rules could decide the outcome of the 2020 White House race amid the electoral challenges posed by the coronavirus pandemic.”

Wall Street Journal: “Voting by mail will face its biggest test since the onset of the coronavirus pandemic when seven states and Washington, D.C., hold primaries Tuesday.”

The Wisconsin Supreme Court “agreed to take a second swing at resolving a lawsuit over who should be on Wisconsin’s voter rolls Monday, six months after deadlocking on the case,” the Milwaukee Journal Sentinel reports.

“The case will determine whether about 150,000 voters whose addresses are in doubt can stay on the voter rolls. If voters are kicked off the rolls, they will be able to re-register online, by mail, in their clerks’ offices or at the polls on election day.”

“While registration is easy in Wisconsin compared to some states, voting rights advocates contend it will be more difficult this year because the coronvairus pandemic is keeping many people in their homes.”

New York Times: “Mr. Biden’s campaign is designating Addisu Demissie, a veteran Democratic strategist who managed Senator Cory Booker’s presidential campaign, as a senior adviser responsible for coordinating the convention. It is also naming Lindsay Holst, who was Mr. Biden’s digital director when he was vice president, to lead special projects for the convention, including its digital side, according to people familiar with the appointments.”

Attorney General William Barr suggested to the New York Times that foreign adversaries will try to interfere in the 2020 presidential election by making and sending out “counterfeit ballots” to voters.

Barr said the idea was “one of the issues that I’m real worried about,” claiming that “there are a number of foreign countries that could easily make counterfeit ballots, put names on them, send them in. And it’d be very hard to sort out what’s happening.”

Business Insider: “The theory that foreign adversaries would print out fake ballots and send them out in batches to election offices — which Barr himself did not cite any evidence to prove — is very unlikely for several reasons… Most ballots and the envelopes they come in have barcodes and extremely specific information, like precinct numbers and voter identification numbers, that are very hard to replicate.”

Washington Post: “Current and former election administrators said it would be virtually impossible for a foreign country to produce and mail in phony absentee ballots without detection, an issue Attorney General William Barr raised as a serious possibility in an interview published Monday.”

“Election officials will have to grapple with that very challenge Tuesday, when voters in nine states and the District of Columbia vote by mail or head to the polls for primaries. Several cities set to hold an election have seen massive protests, at times spiraling into looting and violence.”

“With widespread curfews keeping residents in their homes and some ballot-return locations shuttered, some voters could end up disenfranchised, voting rights activists warned.”

Jonathan Bernstein: “After a month of bad news, President Donald Trump’s approval ratings have taken another hit. He’s in serious trouble for re-election.”

“Most of the damage is on the disapproval side. On May 1, Trump was at 43.3% approval and 50.7% disapproval, according to the estimate at FiveThirtyEight, which is based on an adjusted average of all the polls out there. Now? Although his approval is down just a bit, to 42.9%, his disapproval is up another three percentage points and sits at 53.6%. Two months ago, Trump was getting his best approval numbers since his brief honeymoon; now, he’s lost all of that and is back to where he’s been for most of the past two years.”

“As was the case last month, that means that his numbers resemble those of the last two elected presidents to be defeated for a second term, George H.W. Bush and Jimmy Carter. He’s solidly behind Barack Obama and George W. Bush, both of whom won re-election in reasonably contested efforts, and far behind landslide winners Richard Nixon, Ronald Reagan and Bill Clinton.”

David Frum: “Today, we know the Nixon of the secret tapes: crude, amoral, often bigoted. The public Nixon of 1968, however, behaved with the dignity and decorum Americans then expected in a president. Trump in 2020 occupies the place not of Nixon, but of Daley and George Wallace: Trump is the force of disorder that is frightening American voters into seeking a healing candidate—not the candidate of healing who can restore a fair and just public order.”

“The irony, of course, is that at the same time that Trump tweets bloodthirsty threats, he has turned off the White House lights and cowered in the bunker below. He joins noisy bluster to visible weakness—exactly the opposite of the Nixon formula in 1968. Trump will not repeat Nixon’s success in 1968, because he does not understand that success. Nixon joined his vow of order to a promise of peace at home and abroad. Trump offers only conflict, and he offers no way out of conflict, because—unlike Nixon in 1968—Trump is himself the cause of so much conflict.”

“If Trump seeks historical parallels for his reelection campaign, here’s one that is much more apt. There was a campaign in which the party of the president presided over a deadly pandemic at the same time as a savage depression and a nationwide spasm of bloody urban racial violence. The year was 1920. The party in power through these troubles went on to suffer the worst defeat in U.S. presidential history, a loss by a margin of 26 points in the popular vote. The triumphant challenger, Warren Harding, was not some charismatic superhero of a candidate. He didn’t need to be. In 2020 as in 1920, the party of the president is running on the slogan Let us fix the mess we made. It didn’t work then. It’s unlikely to work now.”

A new Washington Post/ABC News poll finds that 70% of Americans would get a free vaccine for the coronavirus, with 43% saying they’d definitely do so. Among Republicans, just 58% say they’d probably or definitely get the vaccine — with 25% saying they definitely won’t.

“The long and controversial congressional career of Rep. Steve King is in the hands of Iowa Republicans, who will decide Tuesday whether to renominate him for a 10th House term after racially offensive remarks forced national party leaders to distance themselves from the conservative firebrand,” the Washington Post reports.

“King faces four other Republicans in the GOP primary in Iowa’s 4th Congressional District. But it is state Sen. Randy Feenstra who represents the direst threat to King’s continued tenure in the House, garnering the support of major Republican organizations.”