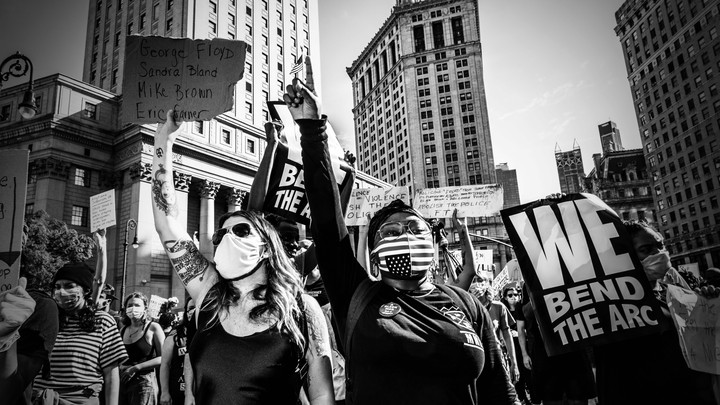 President Trump tweeted that the U.S. government would be “designating ANTIFA as a Terrorist Organization,” Politico reports.

“There were just two problems with that. First, he doesn’t appear to have the legal authority to do so. And second, it’s by no means clear the loosely defined group of radical activists is an organization at all.”

CNN: “Current and former government officials say it would be unconstitutional for the US government to proscribe First Amendment-protected activity inside the US based on simple ideology.”

And that ideology is Anti-Fascism. And that cannot be banned since America is Anti-Fascist. Or at least it used to be before Trump.

Jonathan Swan: “As recently as Saturday night, senior administration officials told me that the designation of a violent cohort of far-left activists, antifa, as a terrorist organization was not being seriously discussed at the White House. But that was Saturday.”

“The situation changed dramatically a few hours later, after prominent conservative allies of the president, such as his friend media commentator Dan Bongino, publicly urged a tough response against people associated with antifa.”

Washington Post: “Never in the 1,227 days of Trump’s presidency has the nation seemed to cry out for leadership as it did Sunday, yet Trump made no attempt to provide it.”

“That was by design. Trump and some of his advisers calculated that he should not speak to the nation because he had nothing to say… He had no tangible policy or action to announce, nor did he feel an urgent motivation to try to bring people together. So he stayed silent.”

“We are a nation in pain, but we must not allow this pain to destroy us. We are a nation enraged, but we cannot allow our rage to consume us. Please stay safe. Please take care of each other.” — Joe Biden, writing on Medium.

A video of a sheriff from Flint, Michigan, taking off his helmet and laying his baton on the ground to join George Floyd protesters on their march has gone viral.

Dan Balz: “Pain and destruction strangle hopes and dreams of people across the country. People are dying — alone from a terrible virus or from a knee on the neck in full public view. Cities burn, destroying businesses and inflaming divisions. Tens of millions are out of work. The president makes it all worse.”

“This is the state of the union as the nation reels from multiple blows, each one arriving with swift and overwhelming force. Long-standing, untreated inequalities have been exposed anew, and they, in turn, have highlighted the country’s real vulnerabilities. What has been just below the surface, known but barely acknowledged and rarely addressed seriously, is now impossible to ignore.”

“America experienced a wave of burning cities in the aftermath of a racial killing in 1968. America was hit by a pandemic in 1918 that killed even more people than the 102,000 who have died of the coronavirus. America was battered by a Great Depression in the 1930s and laid low by a Great Recession just a decade ago. America has never experienced all of this kind of tumult in the same moment. It is more than the system can bear, and people grieve for the country.”

“This is like Charlottesville all over again. He speaks and he makes it worse. There are times when you should just be quiet. And I wish that he would just be quiet.” — Atlanta Mayor Keisha Lance Bottoms (D), quoted by Axios, on President Trump.

“President Trump’s mockery of coronavirus masks, his false claims about the dangers of voting by mail and his insinuations that a cable TV nemesis was involved in a murder are testing more high-profile Republicans’ willingness to look the other way,” Axios reports.

“Republicans learned a long time ago how dangerous it is to alienate Trump’s base — which is why any hint of disagreement, even a whisper, is so remarkable when it happens.”

Despite sending out some inflammatory tweets Saturday morning, President Trump maintains he is “not at all” concerned his words might stoke racially-motivated violence in the wake of protests over George Floyd’s death while in police custody earlier this week, claiming that his supporters “love African Americans,” The Week reports.

“President Trump said Saturday that he will postpone until September the annual Group of Seven meeting of world leaders, which he had wanted to hold in-person by the end of June at the White House as the administration tries to project a return to normalcy amid the coronavirus pandemic,” the Washington Post reports..

“But German Chancellor Angela Merkel had declined Trump’s invitation to come to Washington for the meeting, citing concerns about the pandemic.”

Said Trump: “I don’t feel that as a G-7 it properly represents what’s going on in the world. It’s a very outdated group of countries.”

Rep. John Lewis (D-GA) called for “love, peace and nonviolence” from all Americans as the nation reacts to the murder of George Floyd in Minneapolis, NBC News reports.

Said Lewis: “Never, ever give up on any of our brothers and sisters. We’re one people, we’re one family. We all live in the same house, not just the American house, but the world house.”

“The FBI’s top lawyer is resigning amid renewed pressure from President Trump and Republican allies for the bureau to remove any remaining officials associated with the Russia investigation,” CNN reports.

“Standoffs intensified across the country on Saturday. In Minneapolis, officials were anticipating a fifth night of unrest,” the New York Timesreports.

“As protests escalated, mayors ordered people off the streets in some of America’s largest cities, including Los Angeles, Chicago, Atlanta, Miami and Philadelphia.”

Several prominent Minnesota officials on Sunday called for all four Minneapolis police officers involved in George Floyd’s death to be held accountable, as protests and police clashes continue escalating in major cities across the country.

Minnesota Attorney General Keith Ellison, Rep. Ilhan Omar (D-MN) and St. Paul Mayor Melvin Carter (D) expressed their dissatisfaction over former police officer Derek Chauvin — who is seen in videos pressing his knee on Floyd’s neck as he struggled to breathe — being the only cop facing criminal charges thus far. All four cops have been fired for their involvement in Floyd’s death.