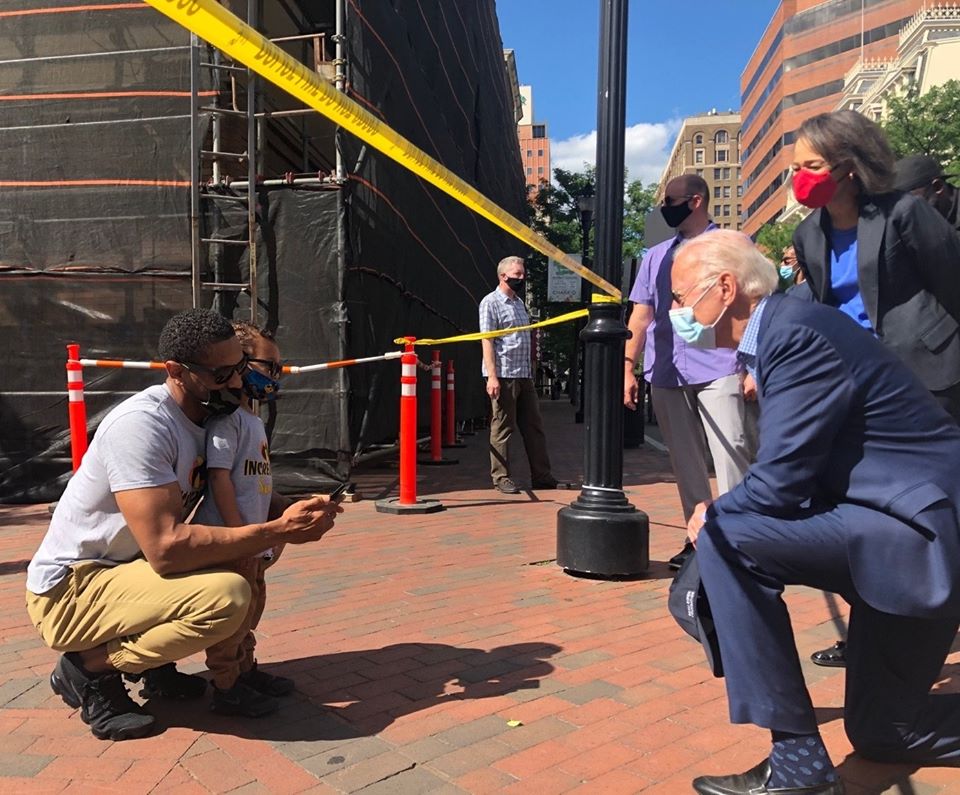 “That 10 percentage-point margin compares with what was a virtual dead heat between the two candidates two months ago, when Biden was at 49% and Trump 47%.”

Key takeaway: Among self described independents, future President Joe Biden has a monster 17 point lead: 56% to 39%.

Jonathan Swan: “People close to the president, including several senior White House officials, have privately expressed concerns that his incendiary response to the Minneapolis riots will hurt him with two groups that could remove him from office in November: independents and suburban women. These are groups who already tell pollsters they don’t like Trump’s tone, even if they like some of his policies.”

“One adviser said they saw it as the president’s worst moment since Charlottesville.”

“A senior White House official, who typically likes it when Trump takes tough law-and-order positions, described the tweet as ‘stupid.’”

Harry Enten: “It’s important to put individual polls into context, and that context continues to show Biden’s in one of the best positions for any challenger since scientific polling began in the 1930s.”

“There were more than 40 national public polls taken at least partially in the month of May that asked about the Biden-Trump matchup. Biden led in every single one of them. He’s the first challenger to be ahead of the incumbent in every May poll since Jimmy Carter did so in 1976. Carter, of course, won the 1976 election. Biden’s the only challenger to have the advantage in every May poll over an elected incumbent in the polling era.”

“Biden remains the lone challenger to be up in the average of polls in every single month of the election year. His average lead in a monthly average of polls has never dipped below 4 points and has usually been above it.”

“Law enforcement credentials once offered an appealing and protective sheen to a handful of the top prospects in contention to be Joe Biden’s potential running mate,” Politico reports.

“But three of those candidates — Sen. Kamala Harris, Rep. Val Demings and, most notably, Sen. Amy Klobuchar — now find their records under new scrutiny in a presidential race transformed in the wake of national outrage surrounding Monday‘s death of George Floyd under the knee of a white Minneapolis police officer.”

New York Times: “Michigan amounts to a one-state case study on how Mr. Trump’s impulsiveness, inattention to detail and penchant for personal insults have eroded his political standing and diminished his chances to win re-election.”

“In addition to his ultimatum over federal funding, Mr. Trump has ridiculed a half-dozen of the state’s female leaders, proposed cutting support for the Great Lakes and suggested a beloved former lawmaker from Michigan is in hell.”

Sen. Kamala Harris (D-CA) was one of those protesters who gathered at Lafayette Park across from the White House shouted “Black Lives Matter” and ”I can’t breathe,” the AP reports.

She later tweeted: “People are in pain. We must listen.”

Ben Smith: “Four years ago, he told me he was considering a future in politics. On Thursday, I asked him whether he was interested in the most obvious role, which will be open next year in a city aching for leadership: mayor of New York.”

“He paused, and said he didn’t want his answer to cause a storm of news.”

Then, he said: “New York City is going to need a very strong mayor in the aftermath of this, and I always like a challenge.”

“Joe Biden’s choice of a running mate is getting more treacherous with each news cycle. Real-life events — from the outcry over the killing of black men in Minnesota and Georgia, to a mundane request for boating privileges in Michigan — are crashing into his already fraught decision over his No. 2,” Politico reports.

“The vice-presidential vetting process, typically a closely guarded internal affair, is playing out in plain sight, often live and online as Biden remains sheltered at home during a pandemic that’s stalled in-person campaigning. The lead time Biden has given himself — his VP decision isn’t expected for another two months — is bound to further alter the landscape before he ultimately settles on his pick.”

“Biden, along with campaign aides and outside allies, including elected officials and donors, acknowledge that this year’s search — given his advancing age, his own hints that he may serve only a single term, and his No. 2’s ability to shape the direction of the party—has taken on added significance.”

Washington Post: “Vulnerable Democratic incumbents have massively outraised their Republican challengers, national GOP groups have yet to show the ability to make up the fundraising gap, and in several key districts, some of the party’s most coveted recruits have opted not to run. Public opinion polls, meanwhile, indicate a Democratic advantage on the congressional ballot in line with what the party enjoyed in 2018, ahead of their sweeping national gains.”

ABC News/Washington Post Poll: “Impacts of the pandemic are vast. Seventy-nine percent in this national survey say their lives have been disrupted. Fifty-nine percent report severe economic impacts in their community — up from 43% two months ago. Among those employed before the pandemic began, 24% have been laid off or furloughed.”

“For all that, 57% say it’s more important to try to control the spread of the virus than to try to restart the economy. And as states move to reopen, most people are hesitant. Asked if they’re willing at this time to go to stores, restaurants and other public places the way they did before the pandemic, 58% say it’s too early for that.”

CNN: “Now, a serious divide has emerged among the President’s top allies and advisers over how the President should address several nights of protests and riots.”

“Trump is being urged by some advisers to formally address the nation and call for calm, while others have said he should condemn the rioting and looting more forcefully or risk losing middle-of-the-road voters in November.”

New York Times: “Some in the president’s circle see the escalations as a political boon, much in the way Richard M. Nixon won the presidency on a law-and-order platform after the 1968 riots.”

0 comments on “The Campaign Report – Biden leads by 10”