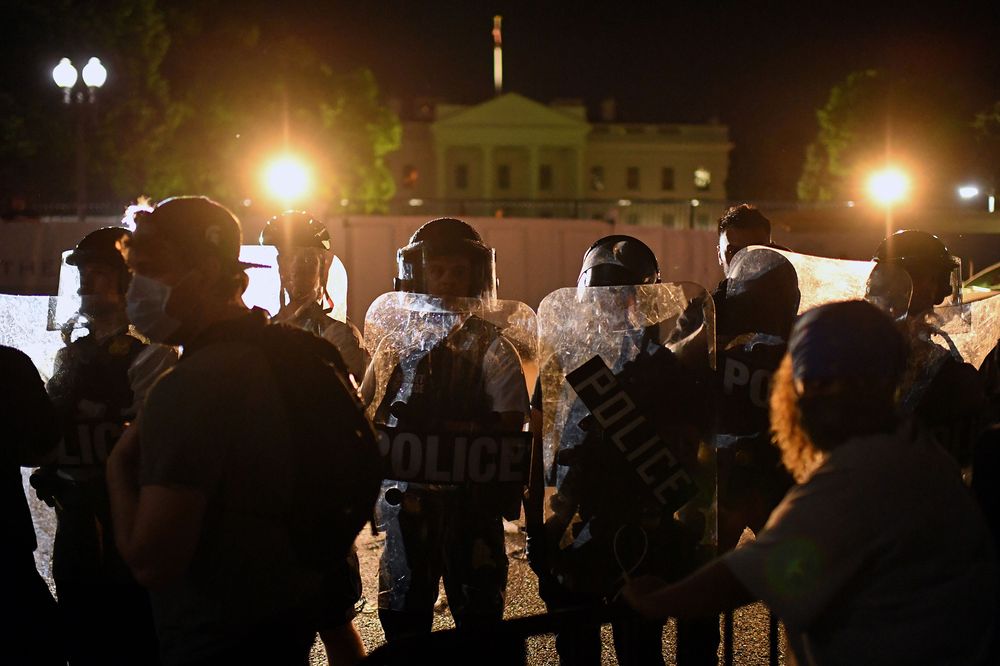 “We’ve never had a person leading the Federation who is as bombastic, who is as overtly racist, who is as likely to provide comfort to someone when they do something wrong, who is as central to that toxic culture as Bob Kroll. And it is time to name names. Bob Kroll is a cancer on this police department, on this city.” — Former Minneapolis Mayor R.T. Rybak (D), quote by WCCO, on Minneapolis Police Federation President Bob Kroll.

That explains the racism in the MPD. What explains the continued violence may also come from the same place. “Shaken by another night of chaos that overwhelmed law enforcement, Gov. Tim Walz (D) said Saturday he will fully mobilize the National Guard to combat what he called a ‘tightly controlled’ group of outside agitators, some of them from out of state, who have turned city streets into scenes of looting and arson,” the Minneapolis Star Tribune reports. So MAGA White Supramacists are instigating the violence. The Mayor and Governor said everyone arrested Friday night and Saturday morning were white and from out of state.

Said Walz: “Our cities of Minneapolis and St. Paul are under assault… an organized attempt to destabilize civil society.” “Walz said as many as 80% of the people causing destruction and fire in the cities could be from elsewhere.”

“Heaping furious, violent contempt on an 8 p.m. curfew declaration and widespread passionate pleas for forbearance and peace, defiant rioters rampaged across Minneapolis for a fourth night Friday and into early Saturday, creating unprecedented havoc as they set towering fires, looted and vandalized businesses and shot at police officers, all in response to the death of an unarmed black man under a white police officer’s knee on Monday,” the Minneapolis Star Tribune reports.

“By all accounts, law enforcement presence was almost undetectable as the violence rapidly accelerated until just before midnight and into early Saturday, when hundreds of police officers, state troopers and National Guard troops, some in armored vehicles, fanned out into troubled areas, confronting rioters with mass force, tear gas and orders to disperse issued via bullhorn.”

“And yet, those efforts had visibly little impact for much of the night, and questions swirled among citizens and politicians about how such a dire situation could have developed in a long peaceable, progressive city.”

Washington Post: “Nobody forced the crisis in Minneapolis upon President Trump. He chose to inflame the tinderbox himself when he issued an ultimatum to people protesting the death of a black man there under the custody of a white police officer.”

“A global pandemic has now killed more than 100,000 Americans and left 40 million unemployed in its wake. Protests — some of them violent — have once again erupted in spots across the country over police killings of black Americans,” the Washington Post reports.

“President Trump, meanwhile, is waging a war against Twitter, attacking his political rivals, criticizing a voting practice he himself uses and suggesting that looters could be shot.”

“America’s persistent political dysfunction and racial inequality were laid bare this week, as the coronavirus death toll hit a tragic new milestone and as the country was served yet another reminder of how black people are killed by law enforcement in disproportionately high numbers. Together, the events present a grim tableau of a nation in crisis — one seared by violence against its citizens, plagued by a deadly disease that remains uncontained and rattled by a devastating blow to its economy.”

President Trump thanked the “very cool” Secret Service agents for protecting the White House on Friday night against demonstrators protesting the death of George Floyd at the hands of Minneapolis police.

Said Trump: “I was inside, watched every move, and couldn’t have felt more safe.”

He added that had protesters would “have been greeted with the most vicious dogs, and most ominous weapons.”

He also bragged that officers were quickly replaced “with fresh agents, like magic” quoting one officer telling him, “We put the young ones on the front line, sir, they love it, and… good practice.”

The United States opened a new era of human space travel on Saturday as a private company for the first time launched astronauts into orbit, nearly a decade after the government retired the storied space shuttle program in the aftermath of national tragedy, the New York Times reports.

Missouri state Rep. Tony Lovasco (R) is facing backlash after he tweeted that “Looters deserve to be shot. … But not by the government,” The Hillreports.

“The tweet came amid massive protests raging across the country following the police-involved death of George Floyd, an unarmed black man, in Minneapolis.”

“Less than four months ago, Xi Jinping faced the biggest crisis of his leadership, as it was bruised by China’s initial, bungled response to the coronavirus,” the Wall Street Journal reports.

“He has since pulled off an extraordinary turnaround, buoyed by Beijing’s reported success in curbing the virus while the U.S. and many other democracies wrestle with it. Mr. Xi has seized the moment to gain ground in areas central to his ‘China Dream’ of a strong unified nation, on par with—if not surpassing—the U.S., while brushing aside government shortcomings.”

“With Washington and its allies distracted by the pandemic and its economic fallout, Mr. Xi is taking bold steps on issues where he’s often faced international pushback, including Hong Kong, Taiwan, the South China Sea and a disputed border with India.”

“Georgia’s governor declared a state of emergency early Saturday to activate the state National Guard as violence flared in Atlanta and cities nationwide following the death in Minnesota of George Floyd after a white officer pressed a knee into his neck while taking him into custody,” the AP reports.

“Another 500 Guard soldiers were mobilized in and around Minneapolis, where Floyd died and an officer faced charges Friday in his death. But after another night of watching fires burn and businesses ransacked, Minnesota Gov. Tim Walz said early Saturday that he was moving to activate more than 1,000 more and was considering federal help.”

“The Guard was also on standby in the District of Columbia, where a crowd grew outside the White House and chanted curses at President Trump.”

CNN: “Long before advising Americans to ingest disinfectant to treat the coronavirus as President, Trump demonstrated a pattern of spreading unsupported medical claims that preyed on the public’s fears of getting sick.”

“In 1993, Trump promoted the widely-debunked claims that AIDS could be spread by kissing and that AIDS patients intentionally spread the virus. As the swine flu pandemic began in 2009, he warned Americans against taking flu vaccines. When the Ebola virus outbreak devastated West Africa in 2014, he disputed guidance by the Centers for Disease Control and Prevention on how it spreads.”

“Today as the nation’s chief executive overseeing his own public health crisis, Trump continues to comprehensively misinform the public about the coronavirus, offering remarks riddled with false, misleading or scientifically questionable claims.”

“Angela Merkel has rebuffed Donald Trump’s invitation to attend a G7 summit, which the U.S. president is keen to portray as a symbol of a return to normality from the upheaval of the coronavirus crisis,” Politico reports.

Said a German government spokesman: “The federal chancellor thanks President Trump for his invitation to the G7 summit at the end of June in Washington. As of today, considering the overall pandemic situation, she cannot agree to her personal participation, to a journey to Washington.”

“The United States, already wrestling with an economic collapse not seen in a generation, is facing a wave of evictions as government relief payments and legal protections run out for millions of out-of-work Americans who have little financial cushion and few choices when looking for new housing,” the New York Times reports.

“New Jersey may have to cut half the state’s 400,000 public employees if the federal government doesn’t help make up a $10.1 billion revenue shortage through June 2021,” Bloomberg reports.