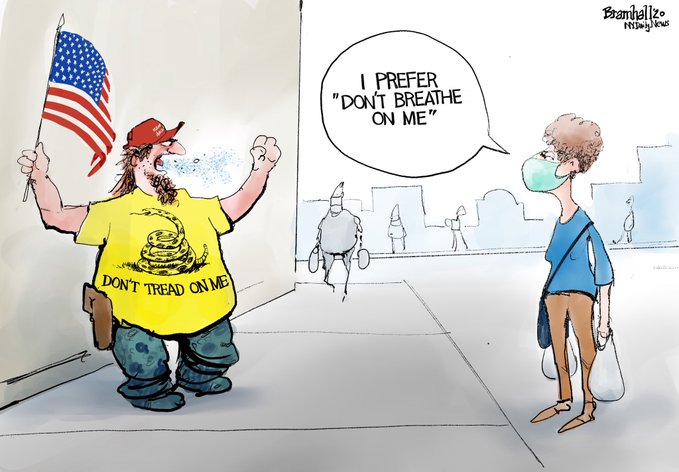 “Twitter on Tuesday slapped a fact-check label on President Trump’s tweets for the first time, a response to long-standing criticism that the company is too hands-off when it comes to policing misinformation and falsehoods from world leaders,” the Washington Post reports.

“The move, which escalates tensions between Washington and Silicon Valley in an election year, was made in response to two Trump tweets over the past 24 hours. The tweets falsely claimed that mail-in ballots are fraudulent.”

Trump also keeps tweeting about the baseless conspiracy that “Morning Joe” host Joe Scarborough murdered a staffer when he was a congressman.

The widower of former staffer wrote to Twitter CEO Jack Dorsey to implore him to remove the president’s tweets about her death. Twitter responded that it would not delete the tweets, and then, perhaps relatedly, came up with the new fact checking policy described above. Joe, Mika and the widower should each sue Donald Trump and Twitter for several billion dollars for intentional infliction of emotional distress and defamation.

Peter Wehner: “Donald Trump doesn’t merely want to criticize his opponents; he takes a depraved delight in inflicting pain on others, even if there’s collateral damage in the process, as is the case with the Klausutis family. There’s something quite sick about it all.”

“A lot of human casualties result from the cruelty of malignant narcissists like Donald Trump—casualties, it should be said, that his supporters in the Republican Party, on various pro-Trump websites and news outlets, and on talk radio are willing to tolerate or even defend. Their philosophy seems to be that you need to break a few eggs to make an omelet. If putting up with Trump’s indecency is the price of maintaining power, so be it…”

“But whatever the political ramifications of this current lie being promulgated by the president, the rest of us need to name it, and to make Trump supporters own it. They are his, and he is theirs.”

President Trump mused about whether he should use insulin while making remarks on protecting seniors with diabetes from the coronavirus.

Said Trump: “I don’t use insulin. Should I be? Huh? I never thought about it. But I know a lot of people are very badly affected, right? Unbelievable.”

Windsor Mann: “So far today, the president has accused someone of murder, accused Democrats of rigging the election, bragged about 100,000+ deaths, called a congressman a fraud, called the Speaker of the House crazy, and misspelled ‘too.’ And that’s just on Twitter.”

“House Republicans planned to file a lawsuit later Tuesday against Speaker Nancy Pelosi (D-CA) to block the chamber’s new system of voting by proxy during the coronavirus pandemic,” the Wall Street Journal reports.

“The Justice Department is closing investigations into three U.S. senators for stocks trades made shortly before the coronavirus market turmoil, but is continuing a related investigation into Sen. Richard Burr (R-NC),” the Wall Street Journal reports.

“Prosecutors on Tuesday are alerting defense attorneys for Republicans Kelly Loeffler of Georgia and James Inhofe of Oklahoma as well as Democrat Dianne Feinstein of California, that they are closing investigations into their trading.”

“A top internal watchdog at the Pentagon, Glenn Fine, submitted his resignation Tuesday, more than a month after President Trump effectively removed him as chairman of the Pandemic Response Accountability Committee, a group of independent watchdogs tasked with overseeing $2 trillion in emergency coronavirus funding,” CNN reports.

Katie Miller, Vice President Mike Pence’s press secretary, announced she has recovered from coronavirus and is back at work at the White House.

She also announced she and her husband, senior White House adviser Stephen Miller, are expecting a baby.

Senate Majority Leader Mitch McConnell (R-KY) said that there would “likely” be a fifth coronavirus relief bill “in the next month or so,” The Hill reports.

Said McConnell: “Many of you are asking, what next? I think there’s likely to be another bill. It will not be the $3 trillion bill the House passed the other day. But there’s still a likelihood that more will be needed.”

Garrett Graff: “Perhaps the clearest sign that three-term Texas congressman Ratcliffe is manifestly unqualified to serve as the nation’s director of national intelligence isn’t the fact that he embellished his resume, nor that a only minority of the US Senate would vote to confirm him, nor that the first time he was floated for the post last summer he was so soundly rejected that he withdrew almost immediately.”

“Instead, it’s that years before just 49 senators of the 116th Congress—all Republicans—voted to confirm him last week as the head of the nation’s 17 intelligence agencies and the president’s top intelligence advisor, the 108th Congress tried to stop a man like Ratcliffe from assuming that very role in the first place. They wrote into the law that created the job, 50 U.S. Code § 3023, ‘Any individual nominated for appointment as Director of National Intelligence shall have extensive national security expertise.’”

Dominic Cummings, British prime minister Boris Johnson’s most senior advisor, continues to be under fire over accusations he breached coronavirus lockdown rules after refusing to apologize and saying he does not regret his actions during an extraordinary press conference in Downing Street’s Rose Garden, The Guardian reports.

It follows mounting pressure about the revelations that he travelled 264 miles across the country from London to his parents’ estate in Durham during lockdown despite suspecting that both he and his wife had coronavirus.

“The risks of reigniting coronavirus outbreaks are complicating efforts to fend off further misery for the many millions who have lost jobs, with a top health expert warning that the world is still in the midst of a ‘first wave’ of the pandemic,” the AP reports.

Said WHO executive director Mike Ryan: “Right now, we’re not in the second wave. We’re right in the middle of the first wave globally. We’re still very much in a phase where the disease is actually on the way up.”

Wall Street Journal: “Car factories are starting back up in Brazil and Mexico. Train service is restarting across much of India. Mining companies are reopening in Peru. The world’s largest developing nations are following recent steps by the U.S. and Europe to ease restrictions aimed at slowing the growth of the coronavirus pandemic in order to spare further pain to their battered economies.”

“There is, however, a crucial difference: Poorer countries are starting to reopen while new infections and deaths are growing, rather than slowing. Health experts say the timing risks an explosive rise in cases and deaths in crowded slums across the developing world.”