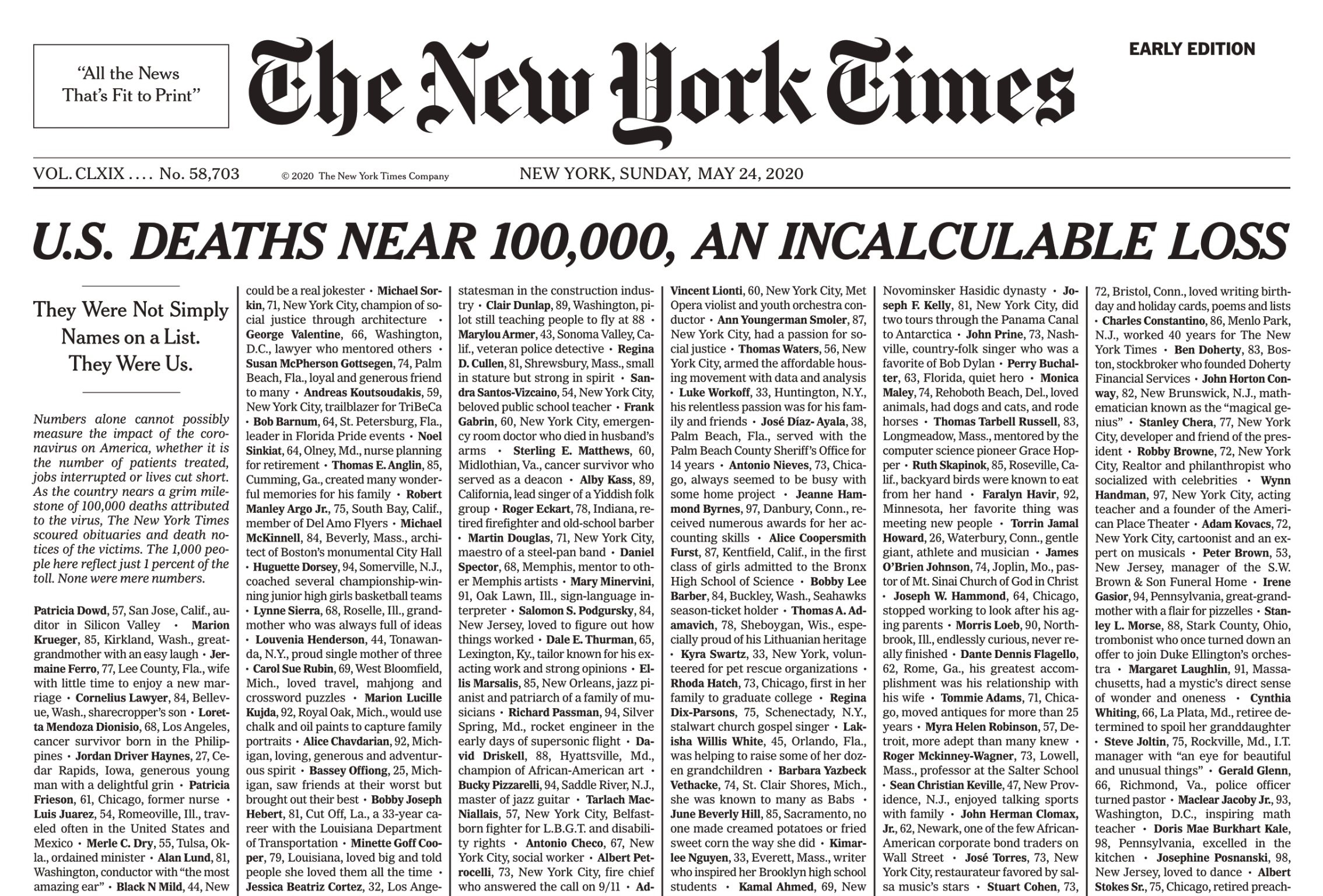 The New York Times took the extraordinary step of devoting the entire front page of the Sunday paper to the names of those who have died in the coronavirus pandemic.

Washington Post: “Trump’s moves in recent days make clear that the president has decided to revive the disruptive themes of his 2016 bid, aimed at branding his opponent as a corrupt member of the Washington establishment and himself as an insurgent problem-solver. It’s a message that often has seemed incongruent with the present reality as Trump leads the federal government’s response to the worst crisis in a generation.”

“In recent days, as the coronavirus death toll has approached 100,000, Trump has pushed conspiracy theories alleging criminality by his predecessor, made baseless charges of voter fraud, accused dozens of people of felonies, used taxpayer-funded events to advance his political message and fanned coronavirus culture wars over issues such as face masks and church closings.”

“For months after the Sept. 11 terrorist attacks, the nation ached together in televised memorials, joining in a collective catharsis of uniformed salutes, bagpiped dirges and President George W. Bush declaring a national day of mourning and remembrance,” the Los Angeles Timesreports.

“The space shuttle Challenger explosion in 1986 turned classrooms into grieving sessions, with President Reagan directly addressing the national wounds. The Japanese attack on Hawaii’s Pearl Harbor in 1941 was a day that President Franklin D. Roosevelt said would live in ‘infamy,’ uniting the mainland to enter a world war.”

“Yet as the nation nears 100,000 deaths from COVID-19 — far more than all those tragic events combined or the entire Vietnam War — there is little sense this Memorial Day weekend that Americans are grieving together or uniting in a sense of purpose.”

“President Trump kicked off his Memorial Day weekend by visiting his club in Virginia, marking the president’s first time back at one of his private golf courses in 75 days, the longest stretch of his administration without spending time at one,” NBC News reports.

New York Times: “The G.O.P. has tightened its ranks; its reliable voters, hovering at around 40 percent of the electorate, tend to approve of almost anything President Trump does. Yet throughout his term, from the 2017 battles over health care and tax cuts to his impeachment and subsequent acquittal early this year, very few people from outside the party have been coming aboard.”

“Mr. Trump has led the charge, but his effects are being felt far down the ballot. Two years after Democrats swept the midterm House elections by a historically wide margin and with historically high turnout, polling suggests they have a shot at a similar showing this year.”

“And in the high-stakes Senate, G.O.P. incumbents in swing states have struggled to disentangle their numbers from Mr. Trump’s stubbornly minoritarian status. That is putting Democrats in a strong position as they look to take back the Senate in the midst of a pandemic.”

“A study of 96,000 hospitalized coronavirus patients on six continents found that those who received an antimalarial drug promoted by President Trump as a ‘game changer’ in the fight against the virus had a significantly higher risk of death compared with those who did not,” the Washington Post reports.

“People treated with hydroxychloroquine, or the closely related drug chloroquine, were also more likely to develop a type of irregular heart rhythm, or arrhythmia, that can lead to sudden cardiac death, it concluded.”

Said cardiologist Eric Topol: “It’s one thing not to have benefit, but this shows distinct harm. If there was ever was hope for this drug, this is the death of it.”

Aides to President Trump are considering a plan to shift the government’s global response to future infectious disease outbreaks to a new unit inside the State Department, Politico reports.

“People familiar with the issue say Dr. Deborah Birx, a top official handling the administration’s response to the ongoing coronavirus pandemic, is likely to wind up in charge of the new unit if it becomes a reality.”

“President Trump is considering establishing a panel to review complaints of anticonservative bias on social media, in a move that would likely draw pushback from technology companies and others,” the Wall Street Journalreports.

“The plans are still under discussion but could include the establishment of a White House-created commission that would examine allegations of online bias and censorship… The administration could also encourage similar reviews by federal regulatory agencies, such as the Federal Communications Commission and the Federal Election Commission.”

Max Boot: “Every great disaster of the past century has brought forth conspiracy-mongers… What’s different about this particular moment in conspiracy history? Three things, I think.”

“First, conspiracy theories spread more efficiently by social media than by previous communications media. The online world is a post-truth space where there are no undisputed facts, only competing narratives, and even the most deranged claims (e.g., QAnon) can aggregate an audience.”

“Second, the stakes are higher now. It doesn’t much matter if someone thinks that UFOs landed at Roswell, N.M., or that Elvis is still alive — but it matters greatly if someone thinks that the coronavirus isn’t real or that a vaccine may be more dangerous than the disease. Such beliefs, if they become widespread, pose a danger to public health. Indeed, anti-vaccine activists are already a menace.”

“Third, we now have an unhinged conspiracy-monger in the White House.”

President Trump is again complaining about Fox News on Twitter:

“Why doesn’t Fox News put up the CNBC poll or the (believe it or not!) CNN Poll? Hope Roger A is looking down and watching what has happened to this once beautiful creation!”

Oliver Darcy: “Trump is saying the quiet part out loud again. He is making it quite clear that he does not view Fox News as a legitimate news organization. If he did, he would not believe that Fox’s job is to be working to help reelect him and other Republicans. But Trump views the network as his mouthpiece. And given most of the network’s coverage, it’s hard to fault him for the misunderstanding…”

“The coronavirus may still be spreading at epidemic rates in 24 states, particularly in the South and Midwest, according to new research that highlights the risk of a second wave of infections in places that reopen too quickly or without sufficient precautions,” the Washington Post reports.

“The Trump administration has discussed whether to conduct the first U.S. nuclear test explosion since 1992 in a move that would have far-reaching consequences for relations with other nuclear powers and reverse a decades-long moratorium on such actions,” the Washington Postreports.

“The matter came up at a meeting of senior officials representing the top national security agencies May 15, following accusations from administration officials that Russia and China are conducting low-yield nuclear tests — an assertion that has not been substantiated by publicly available evidence and that both countries have denied.”

“Former Attorney General Jeff Sessions shot back at President Trump over his decision to recuse himself from the Justice Department’s Russia investigation, offering a rare rebuke of a president he’s sought to tightly hug in his Alabama Senate campaign,” The Hill reports.

Said Sessions: “Look, I know your anger, but recusal was required by law. I did my duty & you’re damn fortunate I did. It protected the rule of law & resulted in your exoneration. Your personal feelings don’t dictate who Alabama picks as their senator, the people of Alabama do.”

Carnegie Mellon University researchers have discovered that much of the discussion around the pandemic and stay-at-home orders is being fueled by misinformation campaigns that use convincing bots.

Said professor Kathleen Carley: “We’re seeing up to two times as much bot activity as we’d predicted based on previous natural disasters, crises and elections.”