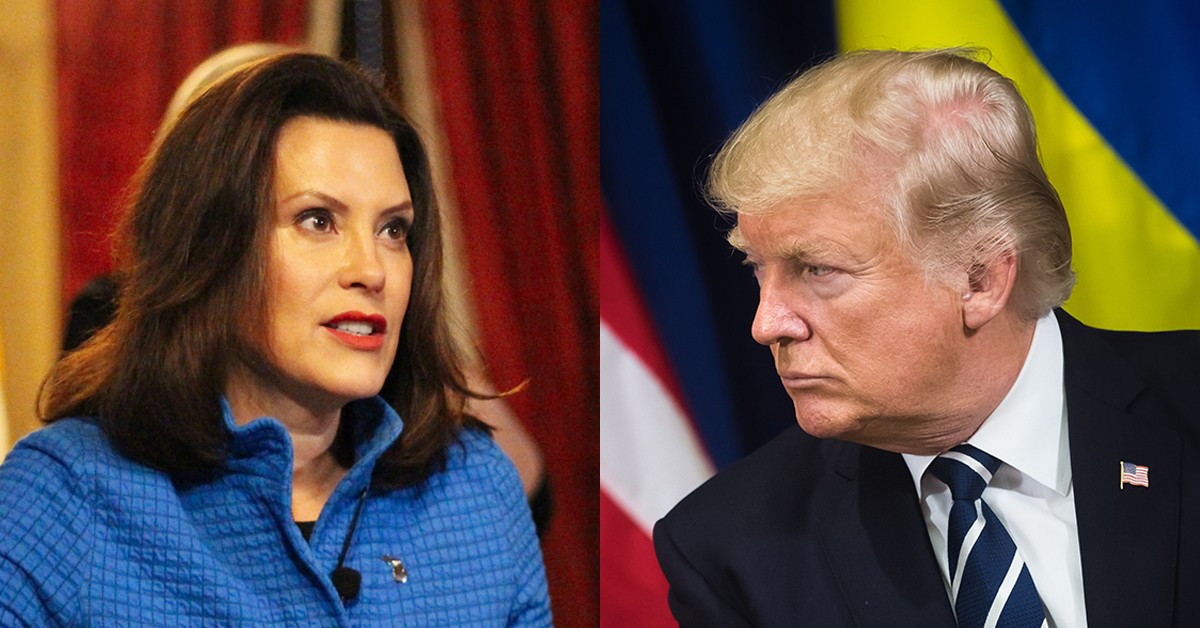 Trump threatened to “hold up” federal funds for Michigan and Nevada because they are expanding mail-in voting to make it easier to vote during the coronavirus pandemic. Trump, set off by an announcement by Michigan’s secretary of state to send absentee ballot applications to every voter in the state, tweeted that SOS Jocelyn Benson had gone “rogue” and sent absentee ballots “illegally and without authorization.

Trump made a similar threat to Nevada, claiming the state had created “a great Voter Fraud scenario” and adding “If they do, ‘I think’ I can hold up funds to the State.” Nevada is mailing absentee ballots to all registered voters for the state’s June 9 primary — an all-mail election — and Secretary of State Barbara Cegavske, a Republican, has closed nearly all of the state’s in-person polling places for the primary. Both Michigan and Nevada have requested emergency funding from the Election Assistance Commission to prepare for holding an election during a pandemic.

Michigan’s attorney general wrote that President Trump has a “legal responsibility” —  under state law  —  to wear a mask as a coronavirus precaution when he visits a Ford Motor Co. factory Thursday, CNBCreports.

“Michigan’s jobless rate topped 22% in April, likely an all-time high for the state, as widespread layoffs continued in the month as a result of the coronavirus pandemic,” the Detroit Free Press reports.

“A new analysis being reviewed by the White House shows southern states that moved too quickly to relax social distancing guidelines face significant risk for a resurgence of the coronavirus over the next several weeks,” the Daily Beast reports.

“A Republican effort to determine who may have leaked the name of Michael Flynn in connection to his 2016 contact with the Russian ambassador has centered on the question of which Obama administration officials requested his identity be ‘unmasked’ in intelligence documents,” the Washington Post reports.

“But in the FBI report about the communications between the two men, Flynn’s name was never redacted.”

“The court, in a written order Wednesday, granted an emergency request by the Trump administration to keep the materials secret while it mounts a full high court appeal against their release.”

“The high court’s action increases the chances that the information will remain shielded through the 2020 election.”

“A day after President Trump privately excoriated the US Centers for Disease Control and Prevention to Republican senators during a lunch on Capitol Hill, the fate of the agency’s director, Dr. Robert Redfield, is in question,” CNN reports.

“As recently as last week, Redfield told colleagues he didn’t think he was in trouble or that his job was on the line… Over the weekend, the momentum appeared to have shifted. Redfield grew concerned he may have a target on his back.”

In a forthcoming documentary, Norma McCorvey — known as Jane Roe of Roe v. Wade — admits that she was paid to make anti-abortion comments “in the mid ’90s when the pro-choice advocate and activist appeared to become a born-again ex-gay Christian with the help of leaders of the evangelical Christian right,” the Daily Beast reports.

“Churches in states at the forefront of reopening efforts are closing their doors for a second time,” the Washington Post reports.

“Catoosa Baptist Tabernacle in Ringgold, Ga., less than 20 miles away from Chattanooga, Tenn., and Holy Ghost Catholic Church in Houston have indefinitely suspended services after members and leaders tested positive for the coronavirus shortly after reopening.”

Secretary of State Mike Pompeo defended his push to have his department’s inspector general fired, saying he “should have done it some time ago,” but refused to explain his reasoning for recommending President Trump remove Steve Linick from his job, CNN reports.

Pompeo refused to elaborate, saying only that he would “share with the appropriate people” and that claims that the recommendation was in retaliation for Linick’s probes are “patently false.”

“The now-fired State Department inspector general had recently wrapped up an investigation into another top aide to Secretary of State Mike Pompeo, determining that she had likely failed to report allegations of workplace violence,” Politico reports.

“Pompeo’s role in the ouster has come under growing scrutiny, with a slew of sudden reports about ways in which the inspector general was looking into his actions, those of his wife, Susan, as well as some of his aides.”

“Republican political operatives are recruiting ‘pro-Trump’ doctors to go on television to prescribe reviving the U.S. economy as quickly as possible, without waiting to meet safety benchmarks proposed by the federal Centers for Disease Control and Prevention to slow the spread of the new coronavirus,” the AP reports.

“The plan was discussed in a May 11 conference call with a senior staffer for the Trump reelection campaign organized by CNP Action, an affiliate of the GOP-aligned Council for National Policy. A leaked recording of the hour-long call was provided to The Associated Press.”

“You will not find a citizenship question on the 2020 census forms,” NPR reports.

“But in the months since federal courts permanently blocked the Trump administration from asking the hotly-contested question for this year’s national head count, the administration has been pushing ahead with a backup plan — amassing government records to try to determine the U.S. citizenship status of every adult living in the country.”

“Put together, these records could be used to yield data that could radically change political mapmaking and shift the balance of political power across the U.S. over the next decade.”

A construction company that has been repeatedly lauded by President Trump has secured a $1.3 billion deal to build over 40 miles of border fencing through south Arizona, the Washington Post reports.