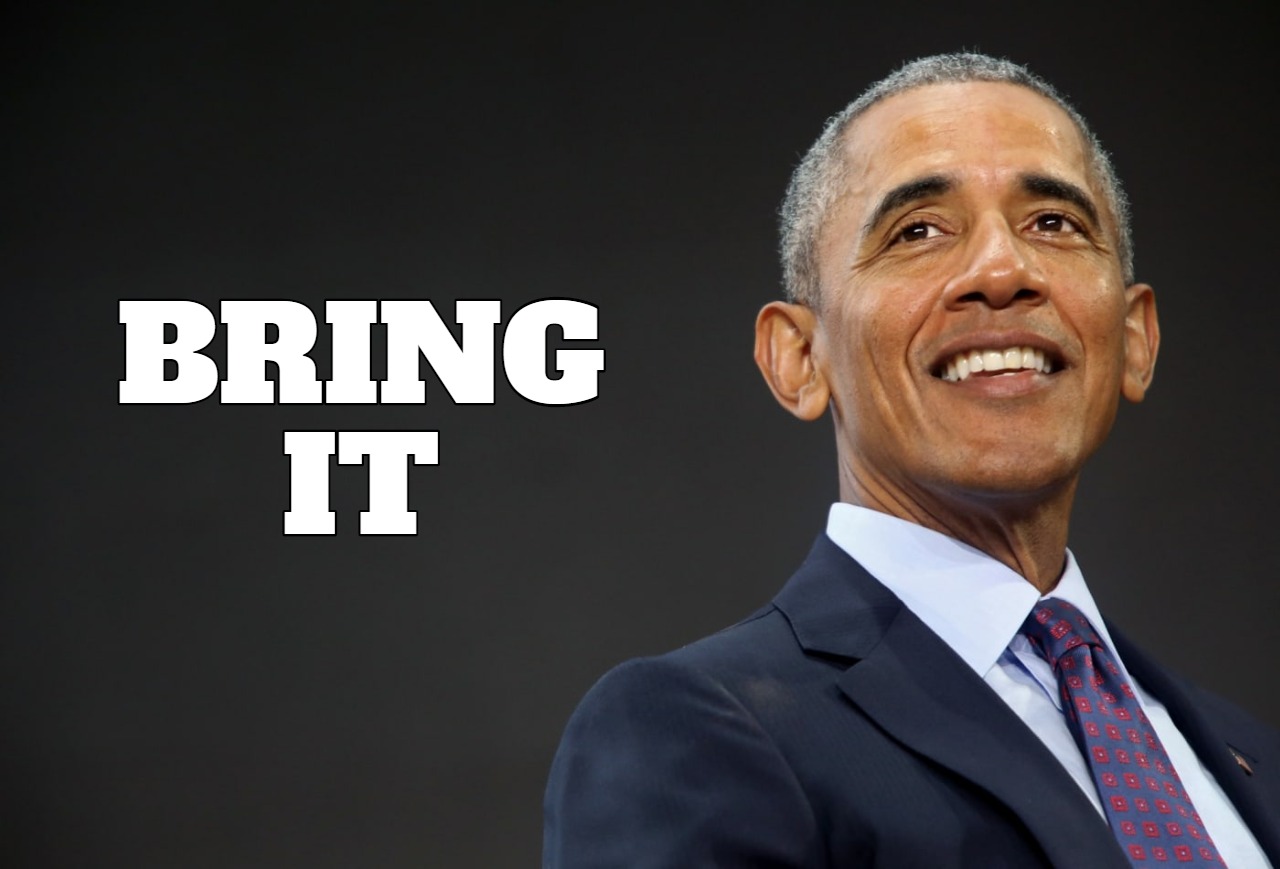 President Trump called on Sen. Lindsey Graham (R-SC) to subpoena former President Barack Obama to testify “about the biggest political crime and scandal in the history of the USA.”

Trump v. Obama is not going to end the way Trump thinks.

Sen. Lindsey Graham (R-SC) brushed back President Trump’s pleas for the Judiciary Committee chairman to haul in former President Barack Obama for testimony about the origins of the Russia investigation and the FBI’s handling of the investigation into Michael Flynn, Politico reports.

Meanwhile, Politico reports Sullivan is signaling that he might pursue perjury or contempt charges against Flynn over his effort to abandon an earlier guilty plea to a charge of lying to the FBI.

Jonathan Chait: “Last week, the Department of Justice took the extraordinary step of withdrawing charges against former Trump National Security Adviser Michael Flynn — charges Flynn had confessed to. Trump’s supporters exploded in celebration at Flynn’s ‘vindication,’ the latest step in Attorney General William Barr’s campaign to discredit and undo the Mueller investigation. By sparing President Trump even the bother of having to pardon his criminal former associate, Barr was giving legal imprimatur to Trump’s view of Mueller as an out-of-control deep-state saboteur.”

“In the end, the court can’t win: Trump can simply give Flynn a pardon. But there is a reason Barr maneuvered to prevent such a blunt outcome. He wanted his dirty work cloaked in the patina of legitimacy and vindication. Unfortunately for him, there are still people in the legal system who are unwilling to trash the rule of law. Should Trump secure a second term, there will be fewer of them.”

President Trump expressed displeasure with Dr. Anthony Fauci and said he wants to “play all sides of the equation” when it comes to re-opening the schools. Said Trump: “I think they should open the schools, absolutely. I don’t consider our country coming back if the schools are closed.”

He added: “I was surprised by his answer… To me, it’s not an acceptable answer, especially when it comes to schools.”

Meanwhile, it has been revealed that President Trump didn’t want to make preparations for the coronavirus pandemic because he was concerned doing so would sent the stock market into a panic, the Financial Times reports.

Said one Trump confidant: “Jared had been arguing that testing too many people, or ordering too many ventilators, would spook the markets and so we just shouldn’t do it… That advice worked far more powerfully on Trump than what the scientists were saying. He thinks they always exaggerate.”

Federal agents seized a cellphone belonging to Sen. Richard Burr (R-NC) as part of the Justice Department’s investigation into controversial stock trades he made as the coronavirus first struck the United States, the Los Angeles Times reports.

“Burr turned over his phone to agents after they served a search warrant… The seizure represents a significant escalation in the investigation into whether Burr violated a law preventing members of Congress from trading on insider information they have gleaned from their official work.”

“To obtain a search warrant, federal agents and prosecutors must persuade a judge they have probable cause to believe a crime has been committed.”

Sen. Thom Tillis (R-NC), who is up for re-election this year, distanced himself from Sen. Richard Burr (R-NC), who is under investigation for insider trading, in a WBT radio interview.

Said Tillis: “Senator Burr does owe all of us an explanation and this is clear evidence that an investigation is underway. We need to see where the investigation leads.”

Goldman Sachs warned the unemployment rate in the United States will peak at 25%, rivaling the worst period of the Great Depression, CNN reports.

The bank previously projected the unemployment rate would peak at 15%. The real jobless rate, which captures the percentage of Americans who want a job but have given up trying to find one, is now expected to hit 35%.

House Judiciary Chairman Jerry Nadler (D-NY) said the committee is considering issuing a subpoena to get Attorney General William Barr to testify before Congress over the decision to drop the case against former National Security adviser Michael Flynn, The Hill reports.

“Now the ranking Democrat on the Senate Commerce, Science and Transportation Committee is questioning the role played by nominee Nancy Beck in the decision to shelve the guidelines. Beck is not a medical doctor and has no background in virology.”

“The Wisconsin Supreme Court has struck down Gov. Tony Evers’ order shutting down daily life to limit the spread of coronavirus — marking the first time a statewide order of its kind has been knocked down by a court of last resort,” the Milwaukee Journal Sentinel reports.

“The state’s highest court  sided with Republican lawmakers Wednesday in a decision that curbed the Evers administration’s power to act unilaterally during public health emergencies.”

President Trump cheered the Wisconsin Supreme Court’s ruling to overturn Gov. Tony Evers’ (D) stay-at-home order intended to limit the spread of the coronavirus. Said Trump: “The people want to get on with their lives. The place is bustling!”

“We’re the Wild West. There are no restrictions at all across the state of Wisconsin… So at this point in time, there is nothing that’s compelling people to do anything other than having chaos here.” — Wisconsin Gov. Tony Evers (D), quoted by the Washington Post, after the state’s highest court invalidated his stay-at-home orders to contain the coronavirus.

“To those politicians who decide to cave in to this coronavirus, they need to understand the consequences of their cowardly act.” — Pennsylvania Gov. Tom Wolf, quoted by the New York Times, addressing county lawmakers who have defied his stay-at-home directives.

Senate Homeland Security Chairman Ron Johnson has teed up a vote next week on a subpoena for a public affairs firm as part of his panel’s Ukraine investigation involving Joe Biden and his son, Hunter Biden, CNN reports.

“A federal appeals court on Friday revived a lawsuit seeking to block President Trump’s hotel in downtown Washington from accepting payments from foreign and state governments,” the Washington Postreports.

“In a divided decision, the court refused to dismiss the novel lawsuit that accuses the president of illegally profiting from foreign and state government patrons at his D.C. hotel.”

“Weeks before a Republican donor and top White House ally becomes postmaster general, the U.S. Postal Service has quietly launched a review of its package delivery contracts and lost its last senior official who was not appointed by President Trump,” the Washington Post reports.

“The moves underscore how Trump is moving closer to reshaping an independent agency he has dubbed ‘a joke.’”

Jonathan Last: “We have a ‘don’t wear masks’ movement that overlaps almost entirely with the ‘reopen immediately’ movement.”

“There are only two possible explanations for why this might be. The first is that people are dumber than a bag of hammers.”

“The second is that when people tell you what they think about ‘reopening’ and ‘masks,’ they aren’t actually talking about the coronavirus. They’re telling a story about how they see themselves and their place in the world.”

“I realize that this is a false choice. And when you see people nodding along as Judy Mikovits claims that ‘wearing the mask literally activates your own virus’ it can be very difficult to tease out which way the causality runs. But on balance, I lean toward the latter explanation.”

Talking Points Memo: “A whistleblower recently ousted from a key research office said repeatedly Thursday that the Trump administration still has no government-wide plan to tackle the COVID-19 pandemic.

“There is no master, coordinated plan on how to respond to this outbreak,” Dr. Rick Bright told the House Health Subcommittee Thursday, asked about shortages of simple supplies like swabs.

Bloomberg: “The result could be anything from a temporary disruption to a full-blown constitutional crisis with competing claims on the presidency. What’s critical, experts say, is that the identity of the commander-in-chief be clear in any situation. At least one scenario could arise where it wouldn’t be.”

“The degree of economic and geopolitical fallout would depend heavily on the severity of the illness, and especially on whether Trump himself became incapacitated.”