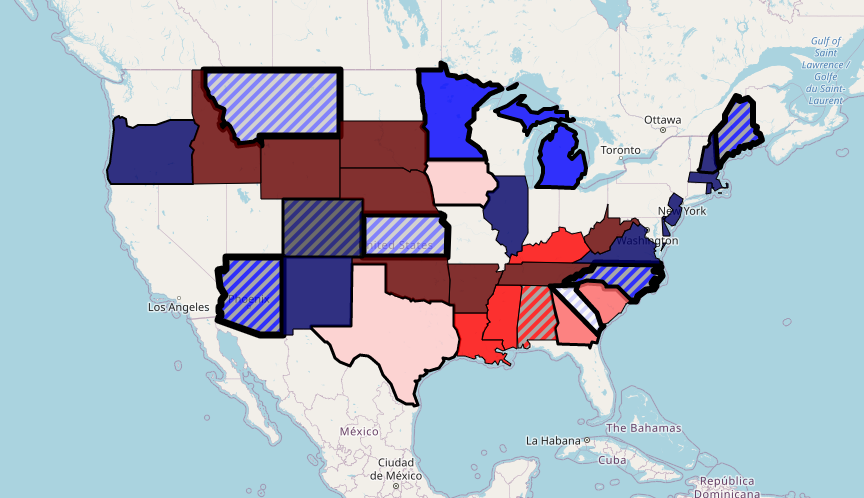 Cook Political Report says both Georgia Senate seats are in play: “Perdue still holds the advantage, but it is now a more competitive picture, and Georgia as a whole is a better opportunity than the other contests we have in Likely Republican, including Kentucky, Texas and South Carolina. So we are moving this contest from Likely to Lean Republican, meaning both of the Peach State’s Senate seats are very much in play this year, though Republicans still retain the advantage.”

National Journal now finds both U.S. Senate seats in Georgia currently held by Republicans are vulnerable in this year’s elections.

Jonathan Bernstein: “It’s becoming more and more obvious that President Donald Trump has simply stopped dealing with the coronavirus pandemic, and has no particular plan for confronting its economic fallout either. In both cases, he’s pretty much substituted wishful thinking for action… My basic sense is that Trump isn’t nearly concerned enough with winning re-election, and that the current catastrophe is in part a consequence of that… Trump simply isn’t finding this aspect of the presidency very much fun.”

“A politician who desperately wanted re-election would’ve been hard at work, from the moment he or she was alerted to the danger, attempting to contain the pandemic and limit the economic damage, and would persevere no matter what the setbacks, never wavering in an effort to produce the policy results that might lead to a big win in November. Such presidents might sacrifice the long term for the short term, as Lyndon Johnson did in goosing the economy in 1964, or Richard Nixon did in 1972. But they would never just give up when things went wrong.”

“That’s not this president. That’s not Donald Trump.”

Sen. Elizabeth Warren talks to Isaac Dovere of The Atlantic about the possibility of being Joe Biden’s running mate:

“Warren told me about a call she received from Biden the morning after her brother died. Their conversation was ‘one person who’d lost loved ones trying to console another person who just lost her beloved brother,’ she said. Connections formed in grief tend to stay with Biden. This one has certainly stayed with Warren.”

A Washington Post-Ipsos poll found that nearly 6 in 10 Americans who are working outside their homes were concerned that they could be exposed to the virus at work and infect other members of their household.

Those concerns were even higher for some: Roughly 7 in 10 black and Hispanic workers said they were worried about getting a household member sick if they are exposed at work.

Washington Post: “With Trump suffering political damage for his management of the coronavirus pandemic less than six months before the election, the president’s government appointees and allies in Congress are using their powers to generate a political storm aimed at engulfing Biden, the presumptive Democratic nominee, and Obama, who polls show is the nation’s most popular political figure, making him a potent threat to Trump as a Biden surrogate.”

“Another objective is to rewrite the history of the Russia investigation as Trump has long sought, by casting Flynn as a martyr wronged by nefarious bureaucratic elites.”

“These efforts are being amplified by wall-to-wall coverage on Fox News Channel and elsewhere in conservative media.”

Matthew Continetti: “When the crisis began, Trump’s approval rating was 44% in the RealClearPolitics average. On May 14, it is 46%. A social and economic calamity befell the country, and Trump’s approval ticked up. Not enough for him to win, necessarily. But enough to keep him in contention…”

“What gives Biden the upper hand is that there are more people who feel negatively than positively about Donald Trump. What gives Trump a chance is the uneven distribution of these people across the country. That was the case before coronavirus. It is still the case today.”

“Watching the numbers hardly budge over these past months, I have sometimes wondered what could move them. War? Spiritual revival? Space aliens?”

“Don’t think so. Throw anything at it. Nothing adheres to this Teflon campaign.”

“A group of Democratic operatives are launching a super PAC to defeat Sen. Lindsey Graham as liberals try to expand the Senate map to include South Carolina,” Politico reports.

“The organization, called ‘Lindsey Must Go,’ say they have over $1 million in commitments and plan to raise at least $4 million through both large- and small-dollar donations.”

“Trump spoke to Pompeo about making a bid for the seat during a one-on-one meeting at the White House about two weeks ago, both people said, suggesting that Pompeo could definitely keep the seat for Republicans if he ran.”

“Trump’s request underscores the growing nervousness among Republicans that they could lose control of the Senate in this fall’s election and that a once safe Kansas seat could now be in play.”

A new Rasmussen Reports survey finds that 23% of Republican voters think their party should find someone other than Donald Trump to be their presidential nominee.

Susan Glasser: “Hating on Obama, lying about him, blaming him: these long ago became the default settings of Trump’s Presidency. When Trump is troubled or cornered or simply deciding what to do, he often finds a way to bring Obama into it, no matter how tenuous or even absurd the connection. He has called Obama a ‘bad’ person, a ‘sick’ person, ‘a disaster,’ ‘the most ignorant President in our history,’ and even the ‘founder of ISIS.’ Barely more than a month into his Administration, in early March of 2017, Trump accused Obama of secretly wiretapping him at Trump Tower during the 2016 campaign, an allegation that was no more true than any of the other nutty things Trump has said about Obama since then. During the course of the pandemic in the past couple of months, Trump has repeatedly invoked Obama and sought to blame his predecessor for everything from the lack of a sufficient national stockpile of medical supplies to inadequate testing for the coronavirus, which did not exist when Obama was President.”

“For Trump, spending the week attacking Obama, no matter what the subject, is the political equivalent of retreating to his bedroom and hiding under the blanket. It’s his safe space, his comfort zone.”

First Read: Some days it feels like 2008 for the GOP (when the bottom looks like it’s going to fall out). And other days it feels like 2012 (when the country isn’t ready to give up on its first-term president and his party). That fluctuation — one day the president seems to suggest that drinking bleach is a good idea, the next day his party wins the CA-25 special — helps explain why the overall polling has remained so steady over the last two years.”

“The bad news for Trump is that his political standing is worse than Barack Obama’s in 2012. And unlike in 2016, Trump is losing among voters who have unfavorable views of both the president and Biden.”

“The good news for him and his party is that the bottom still hasn’t fallen out. At least not yet.”

“And that has us on a collision course for another close election in November.”

Joe Biden said that he would not pardon President Trump if elected and insisted any prosecutorial decisions would be left to a more independent Justice Department, NBC News reports.

A CBS News poll finds that people who rarely wear a face mask say it’s their freedom of choice not to (45%), masks are uncomfortable (37%), their area doesn’t have a lot of cases (35%); or they believe they are not likely to have, or get, the virus (34%).

The PBS NewsHour “spoke with 74 former Biden staffers, of whom 62 were women, in order to get a broader picture of his behavior toward women over the course of his career, how they see the new allegation, and whether there was evidence of a larger pattern.”

“None of the people interviewed said that they had experienced sexual harassment, assault or misconduct by Biden. All said they never heard any rumors or allegations of Biden engaging in sexual misconduct, until the recent assault allegation made by Tara Reade.”

Indeed, because Tara Reade made up her false allegations in March.