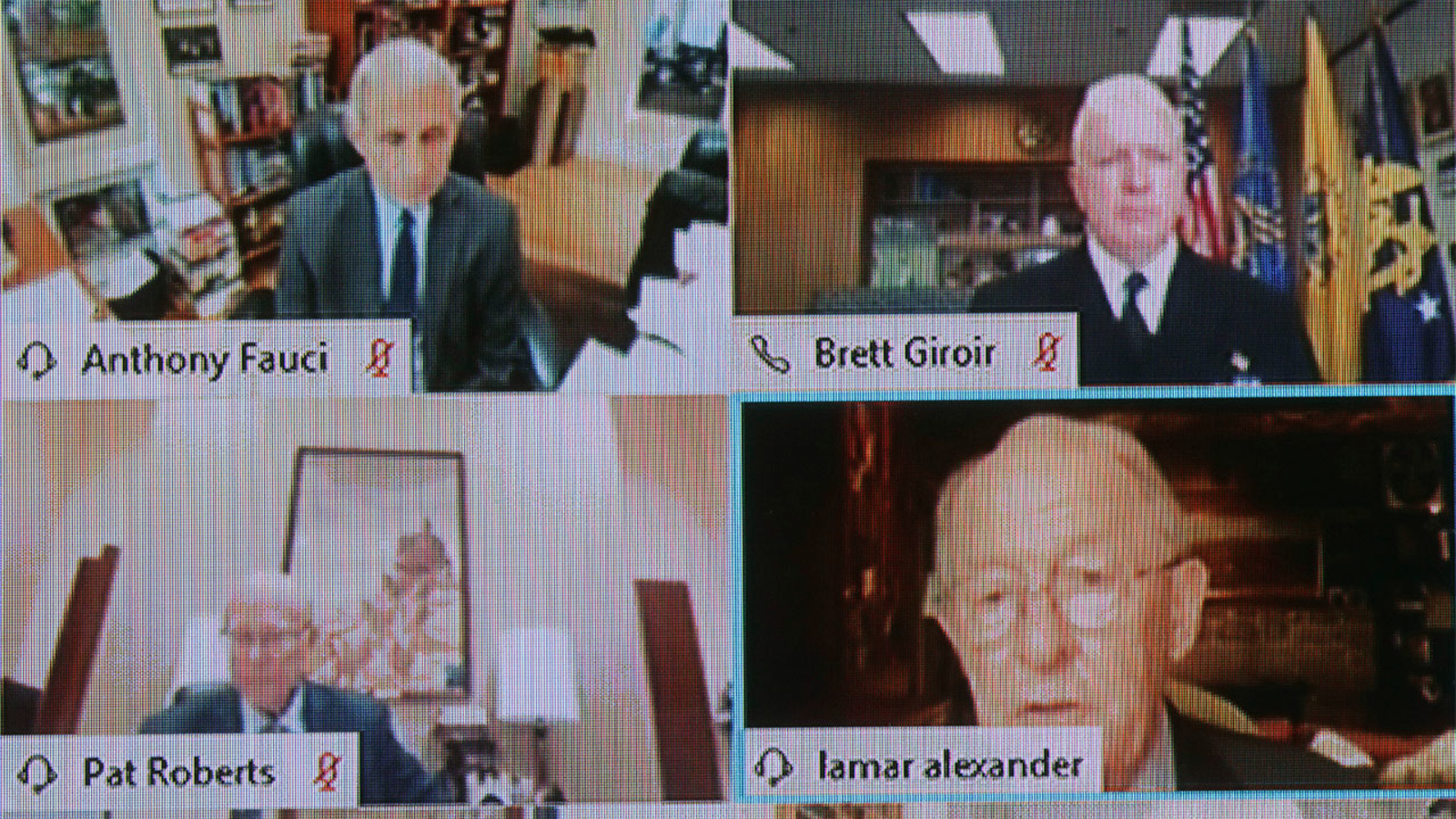 Dr. Anthony Fauci warned the Senate Health, Education, Labor and Pensions Committee that reopening the country too soon “could turn the clock back” and lead to “suffering and death that could be avoided.” The nation’s top infectious diseases expert contrasted Trump’s effort to quickly restart the economy, saying “My concern is that we will start to see little spikes that then turn into outbreaks. The consequences could be really serious […] there is no doubt that when you pull back on mitigation, you will see some cases reappear.” Dr. Fauci added that the death toll is “almost certainly” higher than official counts. He also dismissed the notion that a vaccine would be available by the time schools reopen in the fall, calling it “a bit of a bridge too far.” He added: “There’s no guarantee that the vaccine is actually going to be effective.” Dr. Fauci, Dr. Robert Redfield, director of the CDC, and Stephen Hahn, the head of the FDA, all testified by videoconference because they are self-quarantining after possible exposure to COVID-19.

“Republican senators are conceding that Dr. Anthony Fauci’s testimony warning about moving too quickly to reopen the US economy is inconsistent with President Trump’s push to ‘liberate’ various states and quickly get the country back to business,” CNN reports.

“But the GOP is split about whether Trump should be more cautious with his own public statements or if it’s Fauci who is being too much of an alarmist, as Sen. Rand Paul of Kentucky appears to be asserting.”

Sen. Mitt Romney (R-UT) slammed the Trump administration’s progress on access to coronavirus tests: “I find our testing record nothing to celebrate whatsoever.”

Said Romney: “I understand that politicians are going to frame data in a way that’s most positive politically, but of course I don’t expect that from admirals. But yesterday you celebrated that we had done more tests, and more tests per capita, even, than South Korea, and you ignored the fact that they accomplished theirs at the beginning of the outbreak, while we treaded water during February and March.”

He added: “The fact is their test numbers are going down, down, down, down now because they don’t have the kind of outbreak we have, ours are going up, up, up as they have to. That’s an important lesson for us as we think about the future.”

“After more than three hours of oral arguments Tuesday morning, the Supreme Court seems unlikely to grant President Trump the sweeping total immunity he has asked for while fighting subpoenas for his taxes and other financial records,” Axios reports.

New York Times: “The court’s ruling, expected by July, could require disclosure of information the president has gone to extraordinary lengths to protect. Or the justices could rule that Mr. Trump’s financial affairs are not legitimate subjects of inquiry.”

“But some of the justices’ questions raised a third possibility: that the court could return the cases to lower courts for reconsideration under stricter standards. That would have the incidental effect of deferring a final decision beyond the 2020 presidential election.”

“House Democrats unveiled a coronavirus rescue bill Tuesday that would direct more than $3 trillion for state and local governments, health systems, a second round of stimulus checks, and a range of other priorities,” the Washington Post reports.

“Republicans rejected the legislation even before they saw it as a liberal wish list that would go nowhere in the Republican-led Senate, where Majority Leader Mitch McConnell (R-KY) said he was at work on crafting liability protections for businesses instead.”

“The House will vote Friday on Democrats’ proposal to provide more coronavirus relief and a rule change to allow members to vote by proxy during the pandemic,” Roll Call reports.

“Even as President Trump urges getting people back to work and reopening the economy, an Associated Press analysis shows thousands of people are getting sick from COVID-19 on the job. Recent figures show a surge of infections in meatpacking and poultry-processing plants. There’s been a spike of new cases among construction workers in Austin, Texas, where that sector recently returned to work.”

“To be sure, there are plenty of new infections outside the workplace… Yet of the 15 U.S. counties with the highest per-capita infection rates between April 28 and May 5, all are homes to meatpacking and poultry-processing plants or state prisons.”

Tweeted Trump: “When will they open a Cold Case on the Psycho Joe Scarborough matter in Florida. Did he get away with murder? Some people think so. Why did he leave Congress so quietly and quickly? Isn’t it obvious? What’s happening now? A total nut job!”

That led Scarborough to respond: “For your sake, as I’ve been saying for years — Donald, for your sake, and for the sake of America, you need to stop watching our show, OK? It’s not good for you.”

Rachel Maddow said on her MSNBC show that there’s something off about President Trump after his coronavirus testing press briefing last night.

Said Maddow: “This is something we should all see. Just because I think it is worth knowing. In all seriousness. That the president, right now, in the midst of this crisis, is visibly struggling. There’s something wrong or he’s just not doing okay, I don’t know, but the president apparently just is not able to keep it together right now in his public appearances.”

She added: “What is wrong with the president today? We don’t know. Something is wrong. Whether or not you, you know, like the president or not, whether you enjoy his public affect or not on a regular basis, it’s clear that there is something wrong.”

“Fox News stars are echoing President Trump’s call to ‘reopen the country’ and urging people to get back to work in the face of the coronavirus threat. But Fox’s offices won’t be opening up anytime soon,” CNN reports.

“A Friday memo from Fox Corp chief operating officer John Nallen extended the company’s work from home directive through June 15. On that date, at the earliest, Fox Corp properties like Fox News will begin a gradual reopening of offices. The date could very well be delayed further.”

More than 80,000 people in the U.S. have now died from the novel coronavirus, according to statistics compiled by the John Hopkins University Coronavirus Resource Center. A significant plurality of those deaths are in the Northeast — 26,988, by John Hopkins’ count, in New York state, and 9,340 more in New Jersey.

Increasingly, the virus is moving to smaller cities and rural areas. And though President Trump has touted falling rates across the country, a White House task force report obtained by NBC news and published Monday shows virus rates spiking in the heartland.

“Lawyers for President Trump this week reiterated their argument that a defamation lawsuit from a woman who alleges Trump groped and kissed her without consent should be halted because the president is immune from lawsuits filed in state courts while serving in office,” the Washington Post reports.

“A new 28-page court brief, filed Monday and released publicly by the New York State Court of Appeals on Tuesday, is Trump’s latest salvo in a multi-front legal battle to limit the ability of private citizens, Congress and even law enforcement to investigate him as a sitting president.”

Russian President Vladimir Putin’s spokesman says he is hospitalized with the coronavirus, the AP reports. “The announcement comes just a day after Putin said Russia was successful in slowing down infections and announced easing some of the nationwide lockdown restrictions.”

President Trump and Vice President Mike Pence have agreed to stay away from each other to reduce the risk of both of them being incapacitated by the novel coronavirus, ABC News reports.

“Coronavirus infection rates are spiking to new highs in several metropolitan areas and smaller communities across the country, according to undisclosed data the White House’s pandemic task force is using to track rates of infection,” which was obtained by NBC News.

The data in the report are at odds with President Trump’s declaration Monday that “all throughout the country, the numbers are coming down rapidly.”

“Trump’s Senate allies on Monday stopped short of echoing Trump’s frenetic and unsubstantiated claim that Obama acted illegally when the Justice Department began probing incoming national security adviser Michael Flynn in late 2016. And they indicated that the Senate would pass on investigating the former president as they conduct their own investigations that could soon ensnare other senior Obama administration officials.”