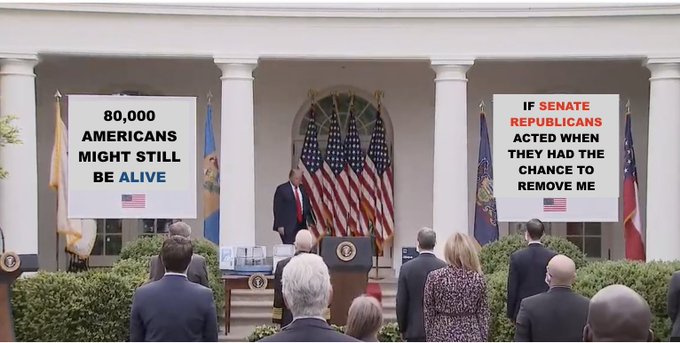 Donald Trump once again stood in the Rose Garden to brag about his administration’s response to the novel coronavirus pandemic, and the message was clear: Mission. Accomplished. Of course, Trump didn’t say “mission accomplished” in so many words. He said “We have met the moment and we have prevailed.”

In response to questions, Trump continues to disavow responsibility for anything and to express surprise at the fact that someone could test negative one day and positive the next.

President Trump told Chinese American reporter Weijia Jiang to “ask China” after she asked him why he views testing as a global competition when thousands of Americans are dying. When Jiang followed up, “Why are you saying that to me, specifically?” Trump called her question “nasty.”

Trump then ended the news conference.

Stuart Stevens: “How does Senate Majority Leader Mitch McConnell, married to a Chinese American, watch the routine public degradation of Chinese American women by a president and say nothing?”

“President Trump was pushing to get out in the public eye in recent weeks and tout his leadership during the pandemic, and White House staff thought they had hit on the ideal event: a presidential visit to thank the Pennsylvania factory workers who had recently taken herculean steps to ramp up U.S. supplies of protective equipment,” the Washington Postreports.

“But after extensive back and forth, factory officials ultimately asked to postpone, worried that a visit from Trump could jeopardize both the safety of the workers and the plant’s ability to produce special material for masks and other medical gear.”

“Nearly 2,000 former Justice Department officials have signed onto a letter calling for Attorney General William Barr to resign over what they describe as his improper intervention in the criminal case of former Trump national security adviser Michael Flynn,” ABC News reports.

They called Barr’s actions “extraordinarily rare, if not unprecedented.”

Jonathan Kravis: “Since my resignation, I have not commented on the Roger Stone sentencing… But I feel compelled to write because I believe that the department’s handling of these matters is profoundly misguided, because my colleagues who still serve the department are duty-bound to remain silent and because I am convinced that the department’s conduct in the Stone and Flynn cases will do lasting damage to the institution.”

“Barr’s decision to…attack his own silenced employees is alarming. It sends an unmistakable message to prosecutors and agents – if the president demands, we will throw you under the bus.

Mary McCord, former acting assistant attorney general for national security, wrote in the New York Times that the Justice Department’s motion to dismiss the case against Michael Flynn “twisted” her words to suggest that the FBI’s 2017 interview of Flynn was illegitimate.

“In short, the report of my interview does not anywhere suggest that the F.B.I.’s interview of Mr. Flynn was unconstitutional, unlawful or not ‘tethered’ to any legitimate counterintelligence purpose.”

Timothy O’Brien: “Trump sued me for libel in 2006 for a biography I wrote, TrumpNation, claiming the book unfairly and intentionally misrepresented his track record as a businessman and lowballed the size of his fortune. The suit was dismissed in 2011.”

“During the course of the litigation, Trump resisted releasing his tax returns and other financial records. My lawyers got the returns, and while I can’t disclose specifics, I imagine that Trump is hesitant to release them now because they would reveal how robust his businesses actually are and shine a light on some of his foreign sources of income.”

“The Trump administration is racing to contain an outbreak of Covid-19 inside the White House, as some senior officials believe that the disease is already spreading rapidly through the warren of cramped offices that make up the three floors of the West Wing,” the New York Times reports.

“Most White House officials will be asked to wear masks or face coverings in public spaces on complex grounds, a move to prevent coronavirus from spreading further inside the presidential compound,” the Washington Post reports. “The request does not apply to offices, however, and President Trump is still unlikely to wear a mask or face covering.”

“But they had not identified who Miller contracted the virus from as of Sunday, raising concerns inside the White House about how to contain the outbreak.”

An anonymous Trump administration official tells CNN “there is extreme sensitivity inside the White House right now at the current state of affairs — officials recognize the contradiction in telling states to reopen while the White House enhances protocols to prevent spread of the virus.”

Secret Service agents have been ordered to wear masks if they’re likely to come into contact with President Trump after White House officials were spooked by two aides testing positive for the coronavirus, ABC News reports. There is also said to be a list of over a dozen people who will be tested every day for the virus before reporting to work in the West Wing.

Oliver Darcy: “The President is melting down on Twitter, posting a mountain of disinformation on his account and giving life to conspiracy theories — and you would not know it by checking the homepages of major news organizations.”

“Senior Trump administration officials are growing increasingly wary of the massive federal spending to combat the economic downturn and are considering ways to limit the impact of future stimulus efforts on the national debt,” the Washington Post reports.

“While no one in the administration is advocating immediate cuts, the unease among senior Trump advisers about federal spending comes as the White House halts talks with Congress on additional emergency measures to rescue a U.S. economy facing its worst crisis in generations.”

“The concerns about the deficit are coming from traditional conservatives at the White House, including new chief of staff Mark Meadows and acting budget director Russ Vought. But officials say they are likely to face much more skepticism from President Trump himself. Trump has shown little interest since becoming president in shrinking the deficit and has so far stood firm on his campaign pledge not to alter Social Security.”

Margaret Sullivan: “Comparing the number of deaths from covid-19 to those caused by car crashes never made any sense. But the gimmick caught on anyway.”

“‘We don’t shut down our economy because tens of thousands of people die on the highways,’ said Sen. Ron Johnson (R-WI). ‘It’s a risk we accept so we can move about.’ President Trump also took up the bogus argument while deploying his trademark exaggeration, insisting that car-related deaths are ‘far greater than any numbers we’re talking about.’”

“In fact, cars kill about 40,000 people a year. Virus-related deaths hit 70,000 in only two months and are growing fast — and yet this comparison still doesn’t even take into account its disproportionate toll on health-care workers, nor the thousands of survivors who will suffer poor health for years, nor, oh yeah, the fact that car accidents aren’t contagious.”

According to the Johns Hopkins tracker, total deaths in the United States will likely surpass 83,000 sometime today.

“Russia’s coronavirus cases overtook Italian and British infections on Monday to become the third highest in the world after a record daily rise hours before President Vladimir Putin was due to review the country’s lockdown regime,” Reuters reports.

Four CEOs of food companies and the president of the American Farm Bureau Federation were told to remove their face masks before a meeting in Iowa Friday with Vice President Mike Pence, a video posted by The Intercept shows.

Wall Street Journal: “Factory furloughs across the U.S. are becoming permanent closings, a sign of the heavy damage the coronavirus pandemic and shutdowns are exerting on the industrial economy.”

“Those factory shutdowns will further erode an industrial workforce that has been shrinking as a share of the overall U.S. economy for decades. While manufacturing output last year surpassed a previous peak from 2007, factory employment never returned to levels reached before the financial crisis.”

Politico: “A growing list of House hard-liners say they have reached their breaking point with the stay-at-home orders, which flipped a switch on the once-booming economy in a bid to limit the spread of coronavirus.”

“In recent weeks, Republicans have been angrily lashing out at the media, local and state officials and House Democratic leadership over the continued shutdown — and are now actively encouraging the fired-up protesters swarming state capitols across the country.”

Bayou Brief: “An internal memorandum from GOP political operative Jay Connaughton, privately circulated among GOP state legislators outlines a series of talking points to use in a coordinated campaign aimed at politicizing and undermining the emergency orders issued by Gov. John Bel Edwards (D) in curtailing the Covid-19 pandemic.”

“Taken in its totality, the document reads like a guide to subverting public health policy and reframing the efforts to curb the pandemic, which has already claimed the lives of at least 1,800 Louisianians, as an ‘economic shutdown.’”

Said Gates: “I wish I had done more to call attention to the danger. I feel terrible. The whole point of talking about it was that we could take action and minimize the damage.”

He added the current pandemic is “the most dramatic thing ever in my lifetime by a lot.”

Kyle Whitmire: “The federal government gave Alabama a blank check for $1.8 billion… That money was supposed to help Alabama protect its citizens from COVID-19 and cover the costs and losses the state has incurred dealing with the disease. There are so many things those funds could pay for, so many ways to put that money to good use.”

“But Alabama Senate leaders want to use $200 million of that money to build a new State House.”

Dr. Rick Bright, the government virologist who says he was removed from his job for putting science over politics, will appear on 60 Minutes this weekend.

He added: “We see too many doctors and nurses now dying. And I was thinking that we could have done more to get those masks and those supplies to them sooner. And if we had, would they still be alive today? It’s a horrible thought to think about the time that passed where we could’ve done something and we didn’t.”