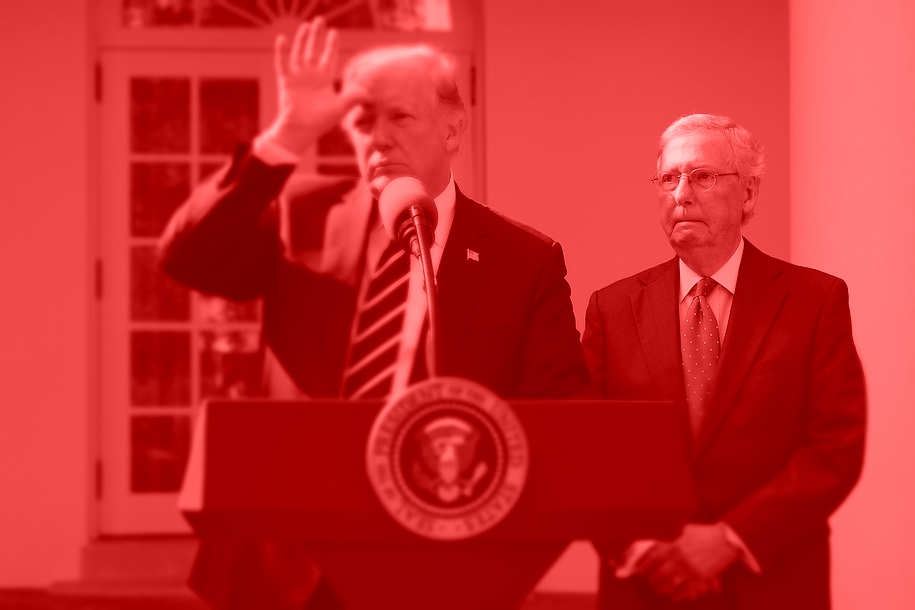 Washington Post: “The president appeared puzzled that the aide, Katie Miller, the press secretary for Vice President Pence, had contracted the virus ‘out of the blue’ after testing negative several times under a routine White House screening program put in place last month.”

“During the event with GOP members, Trump suggested ‘the whole concept of tests isn’t great,’ but he declared that he was satisfied with the procedures that are in place to protect him and his top aides.”

Said Trump: “I don’t worry about things. I do what I have to do. We’re dealing with an invisible situation. Nobody knows. All you can do is take precaution and do the best that you can.”

“President Trump is increasingly dismissing the consensus of health experts, scientists and some of his Republican allies that widespread testing is key to the safe end of restrictions meant to slow the spread of the deadly coronavirus, saying Friday that ‘testing isn’t necessary’ and is an imperfect guide,” the Washington Post reports.

“The president has played down the need for testing as he overrides public health recommendations that would prolong the closures of schools, businesses and much of daily life. Although he is now tested every day with a rapid-result machine, Trump has questioned the value of extensive testing as the gap between available capacity and the amount that would be required to meet public health benchmarks has become clearer.”

Washington Post: “On Jan. 22, weeks before the crisis sent the Trump administration scrambling for masks, Texas manufacturer Prestige Ameritech offered to restart four mothballed production lines. Trump officials did not take the company up on it.”

President Trump said he didn’t wear a face mask while honoring elderly World War II veterans—just one day after his personal valet tested positive for the coronavirus—because he was “very far away from them” and “they’re so pure, it will never happen,” the Daily Beast reports.

Said Trump: “Plus the wind was blowing so hard in such a direction that if the plague ever reached them, I’d be very surprised.”

Asked why Trump didn’t wear a mask while honoring the veterans, press secretary Kayleigh McEnany said, “They made the choice to come here.”

“President Trump hosted nearly 20 House Republicans at the White House on Friday to talk about rebuilding the economy amid the coronavirus pandemic ― and not one of them wore a mask or practiced social distancing,” the HuffPost reports.

“The United States is facing a political and economic challenge like nothing it has seen in nearly 100 years,” the Washington Post reports.

“Mass unemployment on a scale not seen since the Great Depression has erased the economic gains of the past decade and now threatens to linger for years, fueling social discord and shaking an already polarized political system.”

“Almost overnight, it seems, the U.S. economy, which just two months ago boasted abundant jobs and soaring stock values, has become a shambles. Not since the government began collecting official data in 1948 has a smaller share of the U.S. population been employed.”

Former President Barack Obama, talking privately to ex-members of his administration, said Friday that the “rule of law is at risk” in the wake of what he called an unprecedented move by the Justice Department to drop charges against former White House national security adviser Michael Flynn, Yahoo News reports.

In the same chat, Obama also lashed out at the Trump administration’s handling of the coronavirus pandemic as “an absolute chaotic disaster.”

He added: “That’s why, I, by the way, am going to be spending as much time as necessary and campaigning as hard as I can for Joe Biden.”

Writes Conway: “Trump’s position stupefies. In essence: Authorities can’t investigate anything touching his personal affairs — including, ahem, payments to pornographic actresses — because he’s president. Think of the logic: Not only does the president enjoy a personal constitutional immunity — his businesses do, too.”

“President Trump and White House press secretary Kayleigh McEnany on Friday attacked House Speaker Nancy Pelosi for being in California rather than Washington — a sign, they both said, of her unwillingness to work on behalf of Americans,” the Washington Post reports.

“As it turns out, the California Democrat was in fact in Washington, where she was visible to reporters at the Capitol.”

“A review of efforts of several Cabinet departments with tools and enforcement powers to address the pandemic found delayed and uneven assistance or support.”

“The Mexican government is not reporting hundreds, possibly thousands, of deaths from the coronavirus in Mexico City, dismissing anxious officials who have tallied more than three times as many fatalities in the capital than the government publicly acknowledges,” the New York Timesreports.

“The tensions have come to a head in recent weeks, with Mexico City alerting the government to the deaths repeatedly, hoping it will come clean to the public about the true toll of the virus on the nation’s biggest city and, by extension, the country at large. But that has not happened.”

Steve Israel: “Anyone who has experienced the unbearable closeness of voting in the House of Representatives knows it’s a health hazard, even under normal conditions. As soon as bells buzz across the Capitol, 435 House members, on a good day, (plus delegates) race to the floor. The fastest option — the ‘members only’ elevators — each comfortably holds eight people. Ten, if you squeeze. During a vote, members pack in close enough to sense what their colleagues ate for lunch. These are extroverted pols who can’t help but take advantage of a confined space to tell jokes and laugh loudly.”

“When the elevators reach G-3, in the basement of the House Office Buildings, an open-air trolley whisks members to the Capitol building. Each car comfortably accommodates four — during a vote, it’s usually six, sometimes more. It makes the New York City subway system seem civilized. Then members crowd into yet another elevator that lifts them to the House chamber, where they scramble into narrow rows and aisles, sometimes stepping over each other’s legs to squeeze in. Small groups of friends and allies huddle in the aisles and corner seats.”

“This setup is built for the most sociable people on earth — not for the purposes of social isolation. Trying to follow distancing precautions in this environment is nearly impossible.”

When President Trump changed his official residence to Mara-a-Lago in Palm Beach it created a legal mess, the Washington Post reports.

“The property is taxed as a private club — not as a residence, according to Palm Beach County property appraiser records. Trump’s own attorney assured local officials in Palm Beach before they voted to approve the club in 1993 that he would not live there.”

Trump may soon be forced to make a choice: “Stop operating Mar-a-Lago as a club and make it a single-family home again or change his official domicile to someplace else.”

“In ordinary times in Washington, it would matter a lot. It is hardly unusual for presidents to create new structures to navigate a crisis, gathering experts who can distill the work of departments and intelligence agencies and drive the execution of complex plans across a sprawling federal bureaucracy,” the New York Times reports.

“It is why Harry S. Truman created the National Security Council to navigate Cold War realities in 1947, and why Dwight D. Eisenhower moved the science adviser into the White House a decade later to deal with the space race.”

“It is why John F. Kennedy met in secret with a committee of experts during the outset of the Cuban missile crisis to decide whether war or diplomacy was the right path.”

“But the coronavirus task force, led by Vice President Mike Pence, clearly had a different role. It had a psychological resonance with a scared public that wants to see and hear from medical experts after weeks of Mr. Trump’s playing down the effect of the virus. In the end, it was that public-facing role, rather than the expertise the task force gathered or the recommendations it issued to the states, that led Mr. Trump to flip-flop.”

Wall Street Journal: “Large parts of Europe have been ravaged by the pandemic, but Germany has fared better. While it has seen roughly the same number of diagnosed infections as similar-size neighbors—Italy, Spain, France, the U.K.—it has registered only about one-quarter as many deaths.”

“And German authorities, unlike those in Italy and Spain, gave all factories the option to stay open through the pandemic. More than 80% of them did so, and only one-quarter have canceled investments.”