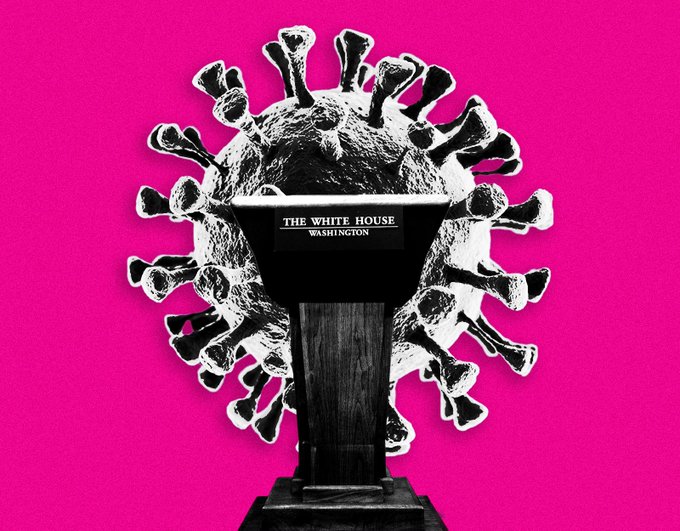 “President Trump has complained to advisers about the way coronavirus deaths are being calculated, suggesting the real numbers are actually lower — and a number of his senior aides share this view,” Axios reports. “A senior administration official said he expects the president to begin publicly questioning the death toll as it closes in on his predictions for the final death count and damages him politically.”

“The U.S. death toll has surpassed 71,000… There is no evidence the death rate has been exaggerated, and experts believe coronavirus deaths in the U.S. are being undercounted — not over-counted.”

Politico: “President Trump boasted on May 1 that his success in responding to the coronavirus pandemic has made ventilator, test kit and mask shortages a thing of the past, and that much of the country is ready to quickly send people back to work. ‘We’ve ensured a ventilator for every patient who needs one,’ he said. ‘The testing and the masks and all of the things, we’ve solved every problem. We solved it quickly.’”

“But that same day, his own health and emergency management officials were privately warning that states were still experiencing shortages of masks, gowns and other medical gear, according to a recording of an interagency meeting between FEMA and HHS officials across the country, conducted by conference call.”

Today, during an Oval Office appearance, Trump contradicted a nurse who said that some are still experiencing shortages of protective medical gear.” Said Trump: “Sporadic for you, but not sporadic for a lot of other people. That was fine, but I have heard we have a tremendous supply to almost all places.”

Jay Rosen: “The plan is to have no plan, to let daily deaths between one and three thousand become a normal thing, and then to create massive confusion about who is responsible— by telling the governors they’re in charge without doing what only the federal government can do, by fighting with the press when it shows up to be briefed, by fixing blame for the virus on China or some other foreign element, and by ‘flooding the zone with shit,’ Steve Bannon’s phrase for overwhelming the system with disinformation, distraction, and denial, which boosts what economists call ‘search costs’ for reliable intelligence.”

“Stated another way, the plan is to default on public problem solving, and then prevent the public from understanding the consequences of that default. To succeed this will require one of the biggest propaganda and freedom of information fights in U.S. history, the execution of which will, I think, consume the president’s re-election campaign.”

“So much has already been made public that the standard script for a White House cover up (worse than the crime…) won’t apply. Instead, everything will ride on the manufacture of confusion. The press won’t be able to ‘expose’ the plot because it will all happen in stark daylight. The facts will be known, and simultaneously they will be inconceivable.”

Washington Post: “With consumers spending less, and factories nationwide shuttered or severely hamstrung, Democrats and Republicans largely representing the hard-hit, auto heavy-Midwest are leading an early push to persuade their colleagues to help manufacturers and suppliers as part of a future pandemic relief package. Absent that assistance, they warn that massive losses could leave workers unemployed and stall any economic recovery.”

“A company created just six weeks ago by a pair of Republican operatives collected hundreds of millions of dollars in payments from desperate state and local governments for coronavirus supplies, but is now facing a federal criminal investigation and a rising chorus of complaints from customers who say their orders never arrived,” the New York Times reports.

Wall Street Journal: “The Trump administration has moved to involve much of the U.S. government in a campaign that includes investigations, prosecutions and export restrictions. Nearly every cabinet and cabinet-level official either has adopted adversarial positions or jettisoned past cooperative programs with Beijing.”

“Chinese officials, for their part, are following through on President Xi Jinping’s call last fall to resist anything they perceive as standing in the way of China’s rise. They have stepped up military activities in the contested South China Sea and intimidation of Taiwan, a U.S. ally, and state media has issued extraordinary public denunciations of Secretary of State Mike Pompeo.”

Sen. Susan Collins (R-ME) said that she will support Rep. John Ratcliffe’s (R-TX) nomination to be the next director of national intelligence, The Hill reports.

“Supreme Court justices on Wednesday expressed skepticism that the Trump administration can broadly allow employers to deny workers free birth control coverage, in a case that could inflame the nation’s culture wars ahead of the presidential election,” Politico reports.

“The court’s conservative majority was expected to side with the administration’s weakening of the contraceptive coverage requirement under Obamacare. However, Chief Justice John Roberts joined some of his liberal colleagues in questioning whether President Trump’s rollback of the policy went too far.”

“President Trump said his administration will urge the Supreme Court to overturn Obamacare, maintaining its all-out legal assault on the health care law amid a pandemic that will drive millions of more Americans to depend on its coverage,” Politico reports.

“The administration appears to be doubling down on its legal strategy, even after Attorney General Bill Barr this week warned top Trump officialsabout the political ramifications of undermining the health care safety net during the coronavirus emergency.”

The Republican governors of Arkansas, Iowa, Missouri and Nebraska and Wyoming write in the Washington Post: “The core reasons our states are open for business are the tenacity, grit and heart of our residents. Their clear-eyed, common-sense approach helped keep our states on track and have set us up to come out of this pandemic stronger than ever. We look forward to leading the way.”

Rachel Maddow: “It’s not often that you can recognize — in real time — the kind of mistake that will haunt a politician every remaining day of their blessed lives, but it helps when five of them co-sign it together, under a headline like this.”

“President Trump is once more pushing to have his border wall painted black, a design change that is projected to add at least $500 million in costs,” the Washington Post reports.

“The president’s determination to have the steel bollards coated in black has fluctuated during the past several years, and military commanders and border officials believed as recently as last fall that they had finally talked him out of it.”

“Trump has not let go of the idea, insisting that the dark color will enhance its forbidding appearance and leave the steel too hot to touch during summer months.”

President Trump reversed course and said that the coronavirus task force will keep working “indefinitely,” a day after he and other officials suggested it would be phased out in the coming weeks.

CNBC reports White House staff had signaled to task force officials that a phase-out was forthcoming. Vice President Mike Pence appeared to confirm those reports, suggesting that winding down the task force is “all a reflection of the tremendous progress we’ve made as a country.”

First Read: “Let’s be blunt about it: President Trump signaled Tuesday that he’s surrendering in the country’s fight against the coronavirus.”

“He did that by announcing his administration has begun to wind down its coronavirus taskforce… He also did it by conceding there will be more death as a result of the reopening.”

“This white flag from Trump comes as the United States is only treading water when it comes to beating back the virus. While the curve of new coronavirus cases has declined in the New York area, it hasn’t elsewhere. It also comes at a when most Americans are willing to stay at home.”

“Private payrolls hemorrhaged more than 20 million jobs in April as companies sliced workers amid a coronavirus-induced shutdown that took most of the U.S. economy offline, according to a report Wednesday from ADP,” CNBC reports.

Bloomberg: “Plenty of layoffs that just a month ago were labeled ‘temporary’ are now tagged ‘indefinite’ or ‘permanent.’ Alongside announcements of sweeping staff cuts by major employers such as Boeing Co. and U.S. Steel Corp. and the accelerating pace of downsizing in brick-and-mortar retailing, such notices are a sign that even as businesses continue to hope for a speedy recovery, they are starting to plan for a slow one.”

Michael Tomasky: “American exceptionalism is the general idea that the United States is different from other countries, endowed with special traits, better, superior. It goes back—well, actually, people debate how far it goes back.”

“But there’s no debating when it ends. It ends this month, in May 2020, under Donald Trump, who in prematurely sending people back to work (and to gyms) so they can die needlessly is destroying not just thousands of human lives but also any idea of America as a special place. That shining city on a hill business? Done.”

“We are a laughing stock. And, we are a horror show… We are an object of international contempt and rage, and maybe at best pity from those dwindling few who still admire what we once were. But that America is dead. Under Trump, the only exceptionalism that exists is that among the nations of the world we are the most exceptionally fucking stupid.”

“President Trump’s demands for the next coronavirus aid package are running into a stubborn obstacle: his own party,” Politico reports.

“As Washington begins zeroing in on its next major coronavirus bill, congressional Republicans are on a different trajectory than the president and are themselves divided on the payroll tax cut, or whether to do anything at all. Much of the party has coalesced behind providing liability protections that Democrats disdain, yet Trump is eyeing the much flashier tax cut as the centerpiece of the upcoming legislation.”