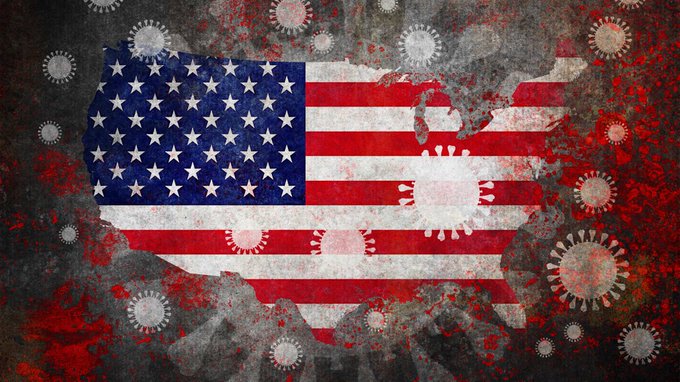 A new Monmouth poll finds Joe Biden leading Donald Trump among registered voters, 50% to 41% with another 3% saying they would vote for an independent candidate and 5% undecided.

When Rep. Justin Amash of Michigan is added to the mix as a Libertarian candidate, Biden gets 47%, Trump gets 40% and Amash gets 5%.

Said pollster Patrick Murray: “Overall, there is not as much of an appetite for a third option as there was four years ago. It’s too early to tell whether Amash will have an impact but if this election ends up being as close as 2016, even a small showing can have a crucial impact.”

A new Economist/YouGov tracking poll finds Joe Biden leading Donald Trump in the presidential race, 46% to 42% with 4% choosing someone else and 5% still unsure.

A new Financial Times-Peterson survey finds 71% of American voters trust their state’s governor over President Trump to decide when to reopen businesses, a signal of mounting dissatisfaction with the president’s handling of the coronavirus crisis.

It also found that just 34% believe they are better off financially than they were when Trump took office.

Ted Howze (R), a congressional candidate in California endorsed by House Minority Leader Kevin McCarthy (R-CA), deleted a string of social media posts, including one that described the Islamic Prophet Muhammad as a pedophile, Politico reports.

There were other posts mocking Parkland high-school shooting survivor David Hogg, one accusing Hillary Clinton of murder and another accusing Rep. Maxine Waters (D-CA) of “hitting the crack pipe too hard.”

Politico: “The coronavirus has killed more than 70,000 Americans, tanked the once-soaring U.S. economy and shows no signs of abating. And Trump’s ineffective leadership is largely to blame, say Democrats who are growing optimistic they can seize the Senate after being relegated to the minority for six years.”

“But nearly all GOP senators running for reelection have decided there’s little utility in breaking with the president, particularly after seeing some fellow Republicans collapse at the ballot box with such a strategy. And if somehow the economy recovers and the virus dissipates by the fall, Republicans could benefit by sticking with Trump.”

“It’s the latest sign that Trump’s control over his party is total. And that Republicans see their own political fortunes tied to the president’s, amid a global pandemic that will dominate both the presidential race and the battle for the Senate over the next six months.”

Lis Smith: “It seems likely that social distancing will force the presidential campaign to be played out entirely on our screens. That will free Mr. Biden, the presumptive Democratic nominee, of the burden of running a grueling, expensive campaign involving incessant travel.

“Instead, he can be digitally omnipresent — at a small fraction of the cost and physical toll — and create a new paradigm for how presidential campaigns communicate in the press for years to come.”

Rep. Ken Buck (R-CO), the Colorado Republican Party Chair, “pressured a local party official to submit incorrect election results to set the primary ballot for a state Senate seat,” according to audio obtained by the Denver Post. Buck is heard insisting that this is an “order of the central committee.”

Former Sen. Jeff Flake (R-AZ) told Yahoo News that thebest thing for the future of the Republican party would be “a sound defeat” for Donald Trump in November. Said Flake: “No doubt. Long term for the Republican Party, you bet. And for conservatism as well.”

“Sen. Richard Burr (R-NC) was not the only member of his family to sell off a significant portion of his stock holdings in February, ahead of the market crash spurred by coronavirus fears,” ProPublica reports.

“On the same day Burr sold, his brother-in-law also dumped tens of thousands of dollars worth of shares. The market fell by more than 30% in the subsequent month.”

New York Times: “Even as young Republicans often accept the science of climate change and support LGBT rights, abortion remains a powerful force pulling them toward the Republican Party — and toward President Trump, whom many of them dislike.”

“Most of those interviewed said they were economically conservative, too, and several emphasized their support for Republican immigration policies and gun rights. But many young Republicans said, they would consider crossing the aisle in this election if not for abortion.”

NBC News: “Supreme Court justices are usually elevated from a federal appeals court. Eleven of the last 12 confirmed justices were plucked from an appellate court … Only five black women are currently serving on U.S. appeals courts, and all of them will be 68 or older this year.”

“There are only nine Democratic-appointed black women on the federal bench younger than 55 this year. All are district court judges picked by President Barack Obama. The youngest is Leslie Abrams Gardner, 45, the sister of Biden vice presidential contender Stacey Abrams.”

This report ignores the fact that when President Ronald Reagan made the same promise to put a woman on the court, he found one in the Arizona state court, Sandra Day O’Connor. The same will happen here. Biden can find numerous African American women judges on state courts throughout the country.

Cook Political Report: “It’s amazing what a difference two months and a pandemic make. Just ten weeks ago, House Republicans could barely contain their excitement at the prospect of tying 30 Democrats in Trump-won districts to self-avowed democratic socialist Bernie Sanders and their votes to impeach President Trump. Today, Joe Biden is the presumptive nominee, and impeachment feels like ancient history.”

“The COVID-19 pandemic has all but frozen House recruitment and fundraising, shielding Democratic incumbents with big financial head starts. Now, Republicans’ path to picking up the 18 seats needed to win back the majority now looks slim to non-existent.”