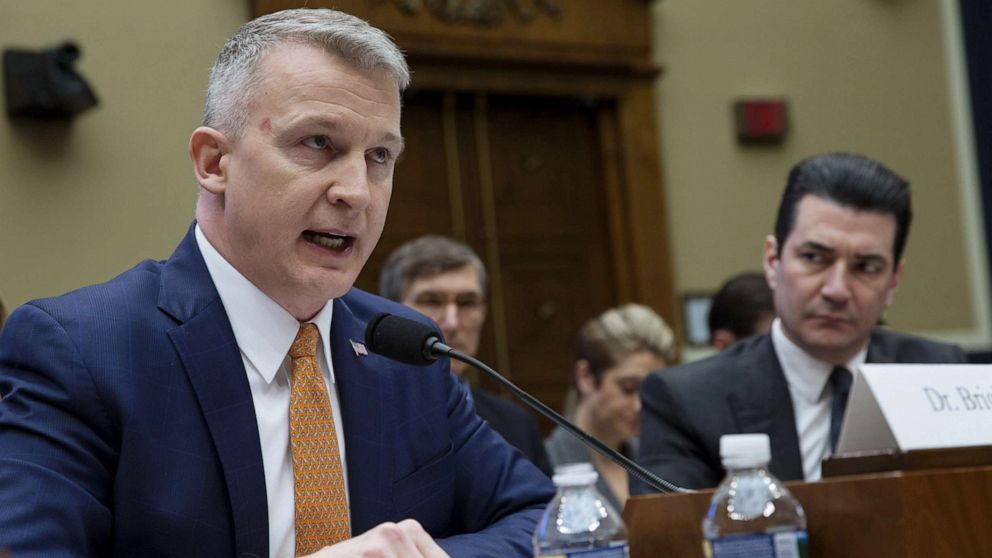 Rick Bright, the former director of the U.S. Biomedical Advanced Research and Development Authority, filed a whistleblower complaint alleging that the Department of Health and Human Services failed to take early action to mitigate the threat of the novel coronavirus.

New York Times: Dr. Bright “said on Wednesday that he was removed from his post after he pressed for rigorous vetting of hydroxychloroquine, an anti-malaria drug embraced by President Trump as a coronavirus treatment, and that the administration has put “politics and cronyism ahead of science.”

Dr. Rick Bright was abruptly dismissed this week as the director of the Department of Health and Human Services’ Biomedical Advanced Research and Development Authority, or BARDA, and removed as the deputy assistant secretary for preparedness and response. He was given a narrower job at the National Institutes of Health.

In a scorching statement, Dr. Bright assailed the leadership at the health department, saying he was pressured to direct money toward hydroxychloroquine, one of several “potentially dangerous drugs promoted by those with political connections” and repeatedly described by the president as a potential “game changer” in the fight against the virus.

“Trump administration officials are telling members and staff of the coronavirus task force that the White House plans to wind down the operation in coming weeks despite growing evidence that the crisis is raging on,” the New York Times reports.

“It is not clear whether any other group might replace the task force. But its gradual demise, which officials said might never be formally announced, would only intensify the questions about whether the administration is adequately organized to address the complex, life-and-death decisions related to the virus and giving adequate voice to scientists and public health experts in making policy.”

The task force officials’ efforts, particularly that of Dr. Anthony Fauci and Dr. Deborah Birx, have been plagued by inconsistent messaging from Trump, along with his bombastic press briefings. Officials have had to clean up the President’s overly optimistic claims and predictions about vaccines for the virus and when the outbreak will be contained enough to reopen the economy.

“I’m viewing our great citizens of this country to a certain extent and to a large extent as warriors. They’re warriors. We can’t keep our country closed. We have to open our country… Will some people be badly affected? Yes. But we have to get our country open.”

New York Times: “If you include New York, it looks like a plateau moving down,” said Andrew Noymer, an associate professor of public health at the University of California, Irvine. “If you exclude New York, it’s a plateau slowly moving up.”

“I don’t think there’s a chance that this virus is just going to disappear. It’s going to be around, and if given the opportunity, it will resurge.” — Dr. Anthony Fauci, in an interview with National Geographic.

“New data from the University of Pennsylvania suggests that relaxing lockdowns across U.S. cities and states could have serious consequences for the country’s battle to contain the coronavirus, which has infected over a million people while killing more than 66,000 people,” Yahoo Finance reports.

“According to the Penn Wharton Budget Model, reopening states will result in an additional 233,000 deaths from the virus — even if states don’t reopen at all and with social distancing rules in place. This means that if the states were to reopen, 350,000 people in total would die from coronavirus by the end of June, the study found.”

“Scientists have identified a new strain of the coronavirus that has become dominant worldwide and appears to be more contagious than the versions that spread in the early days of the COVID-19 pandemic,” the Los Angeles Times reports.

“The new strain appeared in February in Europe, migrated quickly to the East Coast of the United States and has been the dominant strain across the world since mid-March.” “In addition to spreading faster, it may make people vulnerable to a second infection after a first bout with the disease.”

“Top House Democrats on Monday signaled they are forging ahead with the next sweeping coronavirus relief package, aiming to increase the pressure on GOP leaders who have rejected Democratic priorities in previous aid bills,” Politico reports.

“On a private call with members Monday afternoon, Speaker Nancy Pelosi and her deputies sketched the outline of a trillion-dollar-plus package that would deliver aid to state and local governments — some on the brink of public service cuts — while shoring up safety-net programs for the nation’s most vulnerable.”

Said Pelosi: “We have to think big.”

Associated Press: “Alaska, Hawaii, Montana and Wyoming are among the least-populated states in the U.S., and not surprisingly have the lowest numbers of residents who have tested positive for the new coronavirus. But despite their small size, they scored big this spring when Congress pumped out direct federal aid to the states.”

“An Associated Press analysis shows those four, along with other small states, took in an out-sized proportion of the $150 billion in federal money that was designed to address coronavirus-related expenses, when measured by the number of positive tests for the COVID-19 disease.”

Washington Post: “The coronavirus response being spearheaded by President Trump’s son-in-law, Jared Kushner, has relied in part on volunteers from consulting and private equity firms with little expertise in the tasks to which they were assigned, exacerbating chronic problems in obtaining supplies for hospitals and other needs.”

President Trump was asked why he won’t let Dr. Anthony Fauci testify before the House. Said Trump: “Because the House is a set up. The House is a bunch of Trump haters… they, frankly, want our situation to be unsuccessful, which means death.”

“Attorney General William Barr made a last-minute push Monday to persuade the administration to modify its position in the Obamacare dispute that will be heard at the Supreme Court this fall, arguing that the administration should pull back from its insistence that the entire law be struck down,” CNN reports.

“Barr and other top advisers have argued against the hard-line position for some time, warning it could have major political implications if the comprehensive health care law appears in jeopardy as voters head to the polls in November.”

“As it stands now, the Trump administration’s position seeks to invalidate the entire Affordable Care Act.”

President Trump told the New York Post that “everybody” enjoyed his White House coronavirus briefings — including himself — and vowed they will be back, just not daily.

Said Trump: “We set every record with those press conferences. Six million people all the time. You know we had tremendous numbers, literally, it was in Bret Baier’s slot, and we did like 30 in a row.”

He added: “I heard, is this true? It was the highest rated hour in cable television history. That’s what I heard. I don’t know if that’s true.”

Politico: “When seven northeastern states announced they would reopen their virus-shuttered economies in lockstep when the time was right, it was seen as a very-public flexing of local government muscle when Washington was trying to push responsibility onto individual states.”

“But it turns out that the politics of reopening still very much recognize state lines. Four weeks later, it’s clear that a single set of marching orders is out of the question, even for small co-dependent states with porous borders. When it comes to how and when to reopen their economies, the collaborative approach is giving way to the individual needs of the coalition’s seven members.”

Dr. Anthony Fauci told National Georgraphic that, based on the scientific evidence, it’s not likely that the coronavirus was released from a Chinese lab as President Trump claims.

Said Fauci: “If you look at the evolution of the virus in bats and what’s out there now, the scientific evidence is very, very strongly leaning toward this could not have been artificially or deliberately manipulated… Everything about the stepwise evolution over time strongly indicates that [this virus] evolved in nature and then jumped species.”

“Australian intelligence agencies have questioned evidence trumpeted by United States officials supposedly linking the coronavirus to a Wuhan laboratory as concerns within the government grow that the push will derail efforts to eliminate dangerous wildlife wet markets,” the Sydney Morning Herald reports.

Ohio state Rep. Nino Vitale (R) cited his religious beliefs to explain why he would not wear a mask as recommended by Gov. Mike DeWine (R) to help limit the spread of the novel coronavirus, The Hill reports.

Said Vitale: “This is not the entire world. This is the greatest nation on earth founded on Judeo-Christian Principles. One of those principles is that we are all created in the image and likeness of God. That image is seen the most by our face. I will not wear a mask.”

New York Times: “While Mr. Trump and many other presidents have hosted inauguration concerts and gatherings on the memorial’s steps, any event meant to draw an audience inside the interior near Daniel Chester French’s sculpture of a seated Lincoln is prohibited. The area above the top of the steps, where the columns begin, constitutes a boundary protected by federal law.”

“So on Sunday, when the president sat down with two Fox News anchors at Lincoln’s marbled feet during a coronavirus-focused virtual ‘town hall,’ it was because a directive issued by David Bernhardt, the secretary of the interior, had allowed them to do so.”

“Just days before a high-profile Senate confirmation hearing to fill a vacancy on the prestigious U.S. Court of Appeals for the District of Columbia Circuit, the court’s chief judge has opened the door to an inquiry into whether ethical improprieties occurred in the creation of the coveted opening,” the New York Times reports.

“With the number of federal judicial vacancies to fill nearly exhausted, Sen. Mitch McConnell has been urging those contemplating retirement to step aside this year if they want to assure that their successors will be nominated by a Republican president and confirmed by a Republican-controlled Senate.”