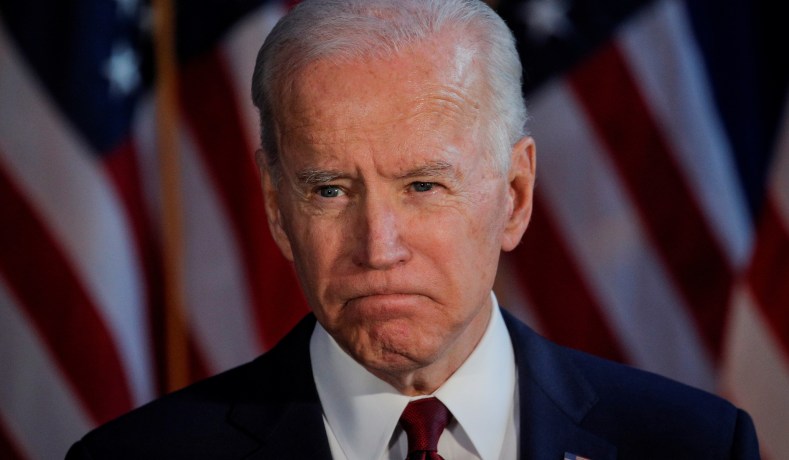 The Presidential race looks like a toss up as well. Donald Trump now leads Joe Biden just 48% to 46% in a state that he won by 9 points in 2016.

Key finding: “Mirroring a trend seen in other polls of Biden polling surprisingly well with older voters, he leads Trump 52% to 44% with seniors.”

A new Dallas Morning News-University of Texas at Tyler poll in a Texas finds Donald Trump and Joe Biden deadlocked in the presidential race, 43% to 43%.

The Lincoln Project, an anti-Trump group of Republicans that includes George Conway—the husband of White House counselor Kellyanne Conway—Steve Schmidt, Rick Wilson, and others, has a new ad out and it’s brutal. “Mourning in America” is a play on the famous “Morning in America” campaign from then-presidential candidate Ronald Reagan in 1984. So doubly brutal.

New York Times: “A convergence of forces has transformed Joe Biden’s search for a running mate on the Democratic ticket. His pledge to pick a woman immediately limited the pool of potential candidates and intensified the competition; that decision, coupled with Mr. Biden’s garrulous tendency to think aloud about his options, have remade the tryout period into an unusually public audition, and the coronavirus outbreak ensured that it is taking place entirely online and on TV.”

“And Mr. Biden himself has increasingly pushed into the political foreground the overwhelming reason that his choice may be the most consequential in decades: the expectation, downplayed but not exactly denied by the Biden campaign, that the 77-year-old would be a one-term president. If that turns out to be the case, his running mate now could well be leading the Democratic ticket in four years.”

Associated Press: “A review of one week’s worth of the 8 p.m. broadcasts, ending on the final day of April, reveals a concerted effort to test attacks on Biden, the presumptive Democratic nominee. But the inherently limited effort also raises questions as to whether the campaign can replace the gold mines of potentially new voter data that the rallies delivered as it attempts to reverse a recent slide in a number of battleground states.”

“The shows are a proxy for the Trump TV network the president considered launching had he lost the 2016 election, and they create an echo chamber for true believers. Akin to actors in a beloved sitcom well into its run, the Trump officials warmly speak in shorthand, trusting that their audience knows the plot and its characters and are tuning in to see programs that, at times, made the president’s infamously off-the-cuff rallies look tightly scripted.”

Philip Klinkner: “There’s a stark partisan difference in who has been affected by the coronavirus: Democrats are far more likely than Republicans to live in communities hit hard by Covid-19.”

“This has contributed to a partisan divide in attitudes about the pandemic, one in which Republican governors, lawmakers, and voters have remained broadly supportive of Trump — and have pushed for policies like the rapid reopening of businesses — while Democrats have not.”

A new CBS News poll finds Elizabeth Warren is well atop Democratic voters’ list of those who should be considered for vice president — with 71% saying she should be.

Warren also outpaces other possible picks by a wide margin as their first choice for the job: Warren at 36% first choice, to Kamala Harris’ 19%, Stacey Abrams at 14%, and Amy Klobuchar at 13%. No one else gets over 4%.

Warren and Biden co-authored an op-ed in the Miami Herald on overseeing the coronavirus relief funds.

Reuters: “Trump had been considered the favorite to win Florida again over the prospective Democratic nominee, Joe Biden, despite edging out Hillary Clinton there by just 1.2%.”

“But two months into the biggest crisis of his presidency, the Republican has received mixed reviews for his response. Florida’s Governor Ron DeSantis, a staunch Trump ally, meanwhile, has been criticized for being slow to close beaches and blamed for a faulty unemployment compensation system that locked hundreds of thousands out of benefits.”

The Constitution Party nominated Don Blankenship of West Virginia as its candidate for president on the second ballot, Ballot Access News reports. Blankenship, a former Republican, failed in his U.S. Senate bid in 2018.

Harry Enten: “The polls clearly show that Biden is ahead and by a larger margin than Hillary Clinton was on the eve of the 2016 election. You might think that would make people believe that Biden is more likely to win, even if it were far from a certainty.”

“Yet, the evidence suggests that Trump’s surprising 2016 victory has warped people into believing that Trump has some magic up his sleeve. They don’t believe he will lose.”

“An average of recent polls finds that a majority of voters (about 55%) believe that Trump will defeat Biden in the election. Trump’s edge on this question has remained fairly consistent over time… Historically, the question of who people thought would win had actually been a pretty good predictor.”

Josh Kraushaar: “Here’s what I’m hearing from smart GOP strategists now: Republicans should be talking about their work to help their communities in the wake of the pandemic, and avoid referencing Trump’s role in managing the crisis. To win battleground Senate seats that are looking more tenuous, it will be crucial to maintain support from some Trump-skeptical independents. If Trump’s political condition doesn’t improve by the fall, prepare to talk about keeping the Senate as a check against Democratic power, even if it means acknowledging the presidency is likely lost.”

Washington Post: “One of the polls, an internal RNC survey of voters in 17 battleground states, had former vice president Joe Biden leading Trump 48% to 45%, according to an adviser briefed on the 20-page polling memo. The coronavirus ranked as the most important issue to voters, and 54% of those surveyed said Trump was too slow to respond to the crisis, while 52% said they believed the government should be doing more.”

“There’s a glaring omission as Democrats lay down millions of dollars to try and win control of the Senate: Democratic Alabama Sen. Doug Jones,” Politico reports.

“The two leading Senate Democratic campaign groups reserved nearly $100 million for the fall in half a dozen states with Republican incumbents. But so far they have put down nothing to protect their most vulnerable incumbent and aren’t yet formally committing to spend big dollars for him.”

“For weeks the Trump reelection effort has diligently cut, catalogued and pushed out viral videos of every verbal stumble Joe Biden makes in interviews, relentlessly pushing the idea that the presumptive Democratic nominee is mentally unfit for the presidency,” the Washington Postreports.

“But behind the scenes, the offensive has become a point of contention among some of President Trump’s closest advisers, who have spent weeks debating without resolution the best message and strategy to accomplish the Trump campaign’s central goal of tarnishing the Biden brand as poll numbers continue to show a rocky road to reelection for the president.”

Texas Attorney General Ken Paxton (R) said that election officials in Texas who offer mail ballots to people who normally wouldn’t qualify but are afraid of catching the coronavirus could be subjected to criminal punishment, the Dallas Morning News reports.