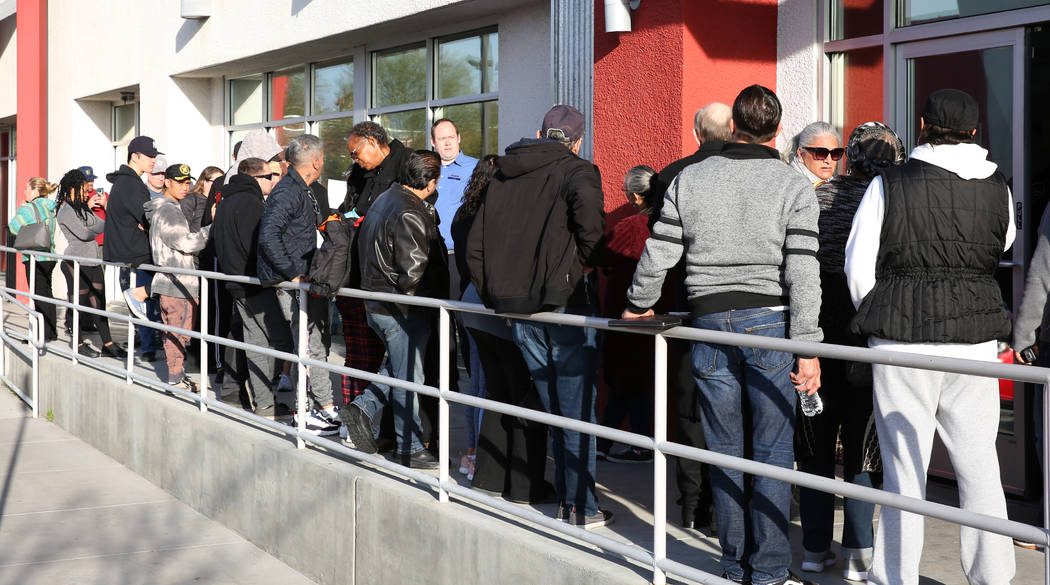 White House economic adviser Kevin Hassett told ABC News that unemployment levels could approach those seen during the Great Depression. Hassett added “the next couple of months are going to be terrible.”

He added: “During the Great Recession we lost 8.7m jobs in the whole thing. Now we’re losing that many every 10 days, so the lift for economic policy makers is an extraordinary one.”

Wall Street Journal: “President Trump is prone to unexpected staffing moves and dismissals, so the decision could still go either way. But people familiar with the discussions say they have accelerated in recent days with a far more serious tone, amid mounting criticism about Mr. Azar’s leadership.”

Said Hogan: “It’s hard to imagine that people thought that the comment was serious. But what people actually were thinking about this was this something you could do to protect yourself?”

President Trump expressed frustration with his daily coronavirus-related news conferences, calling them “not worth the time and effort.”

Washington Post: “The president has spoken for more than 28 hours in the 35 briefings held since March 16, eating up 60 percent of the time that officials spoke.”

“Over the past three weeks, the tally comes to more than 13 hours of Trump — including two hours spent on attacks and 45 minutes praising himself and his administration, but just 4½ minutes expressing condolences for coronavirus victims. He spent twice as much time promoting an unproven antimalarial drug that was the object of a Food and Drug Administration warning Friday. Trump also said something false or misleading in nearly a quarter of his prepared comments or answers to questions.”

“The memo includes advice on everything from how to tie Democratic candidates to the Chinese government to how to deal with accusations of racism. It stresses three main lines of assault: That China caused the virus ‘by covering it up,’ that Democrats are ‘soft on China,’ and that Republicans will ‘push for sanctions on China for its role in spreading this pandemic.’”

Said Birx: “Social distancing will be with us through the summer.”

“Throughout the interview with Chuck Todd, Dr. Birx seemed to be taking pains to avoid directly contradicting or undermining the White House’s messages about the pandemic.”

“As governors decide about opening their economies, they continue to be hampered by a shortage of testing capacity, leaving them without the information that public health experts say is needed to track outbreaks and contain them. And while the United States has made strides over the past month in expanding testing, its capacity is nowhere near the level Mr. Trump suggests it is,” the New York Times reports.

“There are numerous reasons. It has proved hard to increase production of reagents — sensitive chemical ingredients that detect whether the coronavirus is present — partly because of federal regulations intended to ensure safety and partly because manufacturers, who usually produce them in small batches, have been reluctant to invest in new capacity without assurance that the surge in demand will be sustained.”

The death toll from coronavirus may be almost 60 per cent higher than reported in official counts, according to a Financial Times analysis of overall fatalities during the pandemic in 14 countries.

Fox News: “A livestream from Life Tabernacle Church on Sunday showed Tony Spell walking among more than 100 congregants, often repeating the phrase, ‘I’ve just got to get to Jesus… Come on America, let’s get back to Jesus.’”

“Nearly all parishioners were not wearing face masks, and social distancing was not being practiced.”

Washington Post: “House Democrats have blasted President Trump’s response to the coronavirus pandemic as inept and dangerous… Yet amid the biggest national crisis in generations, the one branch of government where Democrats hold power has largely sidelined itself, struggling so far to adopt remote voting, Zoom video hearings or any of the other alternative methods that have become standard for most workplaces in the age of covid-19. No administration official has appeared at a congressional hearing in over a month. Committees have been unable to meet in person to debate and advance bills. There is no firm date for when the new oversight panel will start its work.”

“The frustration is evident among House Democrats, with many increasingly convinced that Congress is functioning as a shadow of its former self, with rank and file largely bystanders as party leaders hastily assemble massive spending bills. More than a dozen told The Washington Post in recent days that the House was failing to meet its constitutional mandate amid an epochal global crisis, abdicating power to the Trump administration as the nation demands strong political leadership.”

New York Gov. Andrew Cuomo (D) said he is in favor of bringing sports back in some form as long as it can generate revenue without ticket sales or bringing fans to arenas.

Said Cuomo: “It would have to be up to them, that they an economic analysis that says some revenue is better than no revenue and my players are willing to negotiate a contract reduction. And if they can do it? Everybody has to think outside the box, because there is no box.”

New York Times: “Depending on the news outlet or social media post, Mr. Kim, believed to be 36, is recuperating after a minor health issue like a sprained ankle, or he is ‘in grave danger’ after a heart surgery. Or he has become ‘brain dead’ or is in a ‘vegetative state’ after a heart-valve surgery gone wrong at the hands of a nervous North Korean surgeon or one of the doctors China dispatched to treat him. Or Mr. Kim is grounded with Covid-19. Where did he get it? From one of those Chinese doctors.”

“One rumor circulating in South Korean messaging apps claims that after French doctors could not wake Mr. Kim from his ‘coma,’ Kim Pyong-il, a half brother of Mr. Kim’s late father, seized power with the help of pro-Chinese elites in Pyongyang, the North’s capital. It goes on to say that Mr. Kim’s powerful sister, Kim Yo-jong, has been detained while Beijing is secretly bargaining with Washington over the future of North Korea and its nuclear weapons.”

“One-on-one coffee meetings, the essential element of the political organizer’s day, still happen, but they occur virtually, with home-brewed tea.”

“That’s created a campaign like no other. With decades-old tactics instantly obsolete, no one knows what will work, how long it will last, what voters want to hear — or how this might reshape politics in the future.”

Wall Street Journal: “They say the Fed’s extraordinary interventions — which include lending programs and asset purchases—make equities more attractive to hold with government bond yields near zero and other havens like gold also near peaks. Meanwhile, many hope Congressional stimulus measures will help carry businesses and consumers through the lockdowns. But some analysts caution that restarting global commerce will be a slow, painful process, prompting some worries that stocks are rising too quickly.”

The Washington Post filed a lawsuit against the State Department after the agency denied speedy processing of the newspaper’s request to see diplomatic cables warning of safety issues at a coronavirus research lab in the Chinese city of Wuhan, where the global pandemic originated, the Washington Post reports.

Mark Lebovich: “One of the recurring features of the Trump years has been the president’s knack for detonating so many of our powerful shared experiences into us-versus-them grenades. Whether it’s the anniversary of a national catastrophe like the Oklahoma City bombing, the death of a widely admired statesman (Senator John McCain) or a lethal pathogen, Mr. Trump has exhibited minimal interest in the tradition of national strife placing a pause upon the usual smallness of politics.”

“In this fractured political environment, the president has shown particular zest for identifying symbols that reveal and exacerbate cultural divisions. Kneeling football players, plastic straws and the question of whether a commander in chief should be trumpeting an untested antimalarial drug from the White House briefing room have all become fast identifiers of what team you’re on. Looming sickness and mass death are no exception. The reflex to unite during a period of collective grief feels like another casualty of the current moment.”

“Tens of millions of pounds of American-grown produce is rotting in fields as food banks across the country scramble to meet a massive surge in demand, a two-pronged disaster that has deprived farmers of billions of dollars in revenue while millions of newly jobless Americans struggle to feed their families,” Politico reports.

“While other federal agencies quickly adapted their programs to the coronavirus crisis, the Agriculture Department took more than a month to make its first significant move to buy up surplus fruits and vegetables — despite repeated entreaties.”