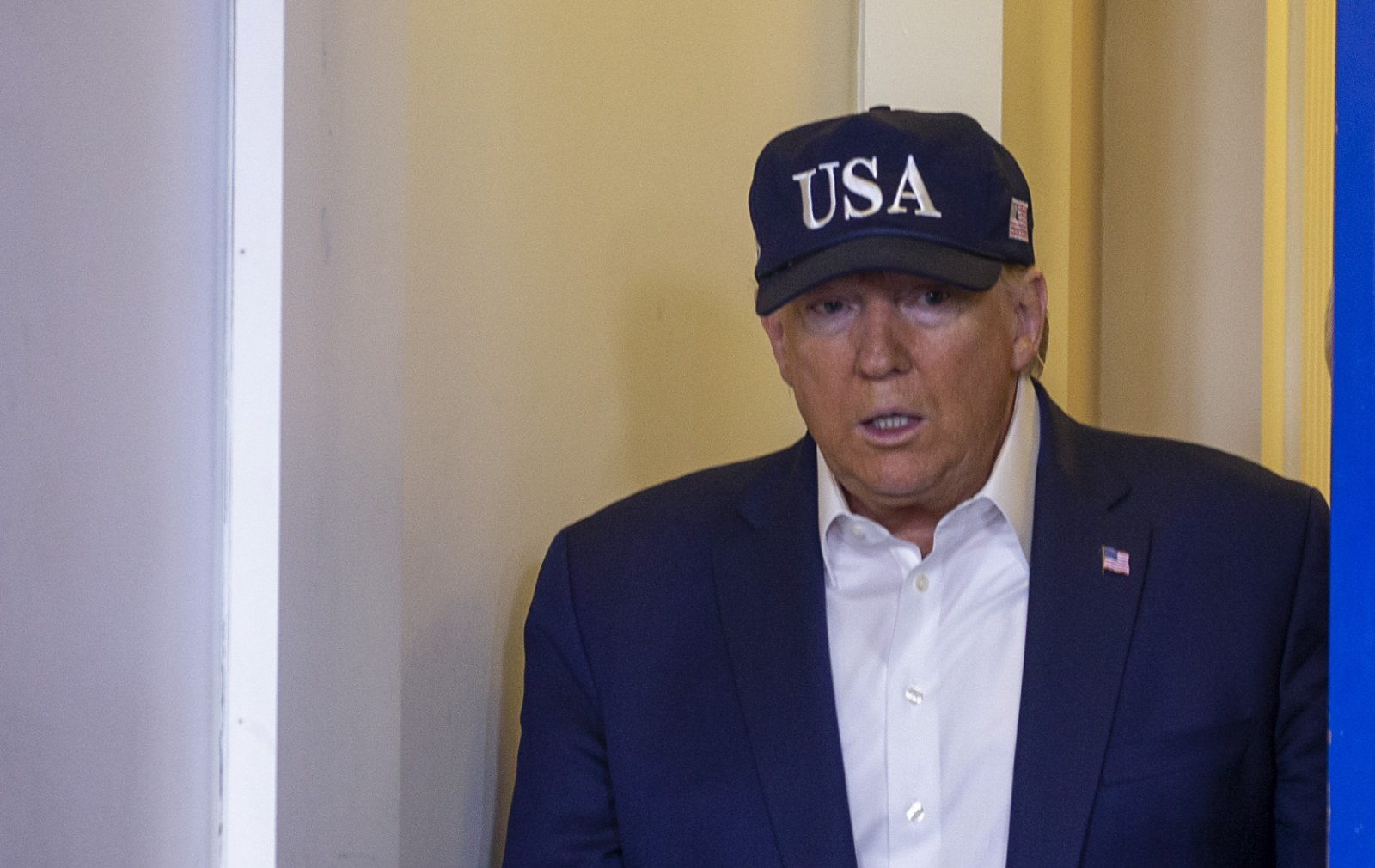 “The doctor who led the federal agency involved in developing a coronavirus vaccine said on Wednesday that he was removed from his post after he pressed for a rigorous vetting of a coronavirus treatment embraced by President Trump,” the New York Times reports.

Said Dr. Rick Bright: “I am speaking out because to combat this deadly virus, science — not politics or cronyism — has to lead the way.”

Speaker Nancy Pelosi excoriated President Trump for what she called his lack of preparation and poor handling of coronavirus testing across the country, NBC News reports.

Said Pelosi: “There’s a Boy Scout saying, ‘Proper preparation prevents poor performance.’ Well, that is exactly where the president gets an F. He was not properly prepared, not with the truth, with the facts, or the admission of what was happening in our country — delay, whatever, delay, denial, death.”

Matthew Yglesias: “This will be an experiment, of course, but the best available evidence casts doubt on the idea that enough customers will return to make it possible for small businesses to stay viable without additional government assistance.”

“For example, we know customers began abandoning America’s restaurants before they were ordered closed, that the handful of states that have avoided broad lockdown orders are still feeling economic pain, and that huge swaths of the economy that have not been shut down are nonetheless experiencing a precipitous decline in sales.”

“The online reservation booking service OpenTable has thoughtfully provided the public with data on reservation volume in every city where they operate. The conclusion: There are some reckless people, but the typical human being is not that interested in risking her life for a dinner out.”

Washington Post: “Hopes of a quick bounce back for the economy — dubbed a V-shaped recovery — have faded. Even as parts of the nation reopen, many Americans will be afraid to venture out, and it looks increasingly likely that restaurants, stadiums and yoga classes are going to be operating at partial capacity, at best, for a while.”

“What isn’t getting as much attention is the possibility of a W-shaped recovery, the scary scenario when the economy starts looking better and then there’s a second downturn later this year or next. The ‘W’ could be triggered by reopening the economy too quickly and seeing a second spike in deaths from covid-19, the disease caused by the coronavirus. Businesses would have to shutter again, and people would be even more afraid to venture out until a vaccine is found.”

“Key members of the coronavirus task force Gov. Brian Kemp (R) tapped to shape the state’s pandemic strategy said they didn’t know about his decision to reopen some shuttered businesses until he announced it at a press conference,” the Atlanta Journal Constitution reports.

“In interviews and public statements, a half-dozen members of the task force said they only learned about Kemp’s move to let barber shops, theaters and dine-in restaurants begin to resume operations after he made it public.”

Treasury Secretary Steven Mnuchin said most, if not all, of the U.S. economy should be reopened by later in the summer after a devastating shutdown to try to stem the spread of the coronavirus, Reuters reports.

“Wisconsin’s Republican-led legislature filed a lawsuit Tuesday in an attempt to reopen the state and block the extension of a stay-at-home order issued by state health officials to slow the spread of the coronavirus,” CNN reports.

“Senate Majority Leader Mitch McConnell is drawing a line: There will be no more attempts at long-distance legislating on the coronavirus,” Politico reports.

“In a telephone interview Tuesday after passage of a $484 billion coronavirus relief bill, the Senate majority leader made clear that the full Senate must be in session before Congress begins its fifth installment of responding to the pandemic. And he signaled he was growing weary of quickly shoveling billions of dollars out the door even as the economy continues to crater.”

McConnell said he favors allowing states struggling with high public employee pension costs amid the burdens of the pandemic response to declare bankruptcy rather than giving them a federal bailout, Bloomberg reports.

Said McConnell: “I would certainly be in favor of allowing states to use the bankruptcy route. It’s saved some cities, and there’s no good reason for it not to be available.”

McConnell may also find himself in conflict with President Trump who said yesterday that states will need assistance: “And I think most Republicans agree too, and Democrats. And that’s part of phase four.”

Associated Press: “An unplanned grand experiment is changing Earth. As people across the globe stay home to stop the spread of the new coronavirus, the air has cleaned up, albeit temporarily. Smog stopped choking New Delhi, one of the most polluted cities in the world, and India’s getting views of sights not visible in decades. Nitrogen dioxide pollution in the northeastern United States is down 30%. Rome air pollution levels from mid-March to mid-April were down 49% from a year ago. Stars seems more visible at night.”

New York Times: “Officials in Santa Clara County, Calif., announced late Tuesday that two residents there died of the coronavirus in early and mid-February, making them the earliest known victims of the pandemic in the United States. The new information may shift the timeline of the virus’s spread through the country weeks earlier than previously believed.”

Washington Post: “Tissue samples taken during autopsies of two individuals who died at their homes in Santa Clara County, Calif., tested positive for the virus, local health officials said in a statement. The victims died on Feb. 6 and Feb. 17, respectively.”

“Initially, the nation’s earliest coronavirus fatality was believed to have occurred on Feb. 29, in Kirkland, Wash., a suburb of Seattle that rapidly became a hotspot.”

“President Trump is eager to hit the road. As his own health officials continue to warn against non-essential travel, Trump has privately urged aides over the past week to start adding official events back to his schedule, including photo ops and site visits that would allow him to ditch Washington for a few hours,” Politico reports.

“The day trips would be similar to those Vice President Mike Pence has made visiting businesses during the viral pandemic, according to three people familiar with the planning.”

“The alarming messages came fast and furious in mid-March, popping up on the cellphone screens and social media feeds of millions of Americans grappling with the onset of the coronavirus pandemic,” the New York Times reports.

“Spread the word, the messages said: The Trump administration was about to lock down the entire country.”

“Since that wave of panic, United States intelligence agencies have assessed that Chinese operatives helped push the messages across platforms… The amplification techniques are alarming to officials because the disinformation showed up as texts on many Americans’ cellphones, a tactic that several of the officials said they had not seen before.”

Washington Post: “A network of right-leaning individuals and groups, aided by nimble online outfits, has helped incubate the fervor erupting in state capitals across the country. The activism is often organic and the frustration deeply felt, but it is also being amplified, and in some cases coordinated, by longtime conservative activists, whose robust operations were initially set up with help from Republican megadonors.”

“The world is facing widespread famine ‘of biblical proportions’ because of the coronavirus pandemic, the chief of the UN’s food relief agency has warned, with a short time to act before hundreds of millions starve,” the Guardian reports.

“More than 30 countries in the developing world could experience widespread famine, and in 10 of those countries there are already more than 1 million people on the brink of starvation.”

“Throughout the coronavirus pandemic, media critics have warned that the decision from leading Fox News hosts to downplay the outbreak could cost lives. A new study provides statistical evidence that, in the case of Sean Hannity, that’s exactly what happened,” Vox reports.

“At the time, Hannity’s show was downplaying or ignoring the virus, while fellow Fox host Tucker Carlson was warning viewers about the disease’s risks.”

“Using both a poll of Fox News viewers over age 55 and publicly available data on television-watching patterns, they calculate that Fox viewers who watched Hannity rather than Carlson were less likely to adhere to social distancing rules, and that areas where more people watched Hannity relative to Carlson had higher local rates of infection and death.”

“The aide, Brian Harrison, had joined the department after running a dog-breeding business for six years. Five sources say some officials in the White House derisively called him ‘the dog breeder.’”

Wall Street Journal: “Many factors muddled the administration’s early response to the coronavirus as officials debated the severity of the threat, including comments from Mr. Trump that minimized the risk. But interviews with more than two dozen administration officials and others involved in the government’s coronavirus effort show that Mr. Azar waited for weeks to brief the president on the threat, oversold his agency’s progress in the early days and didn’t coordinate effectively across the health-care divisions under his purview.”

“The Pentagon is planning a multicity tour of the U.S. military’s top flight demonstration teams to ‘champion national unity’ amid the coronavirus pandemic,” the Washington Post reports.

“The Blue Angels and the Thunderbirds, the demonstration squadrons for the Navy and Air Force, will fly over some cities together and others separately… The flyovers will take place in the next several weeks ‘to thank first responders, essential personnel, and military service members as we collectively battle the spread of COVID-19.’”

Las Vegas Mayor Carolyn Goodman told CNN that she offered the citizens of her city as “control group” to see how many people die of the coronavirus without social distancing.

Said Goodman: “We would love to be that placebo!”

Jon Ralston: “I have seen many Nevada officials stumble on national TV. But that was the single most embarrassing thing I have seen by a Nevada pol in 35 years here. The mayor just showed the country she is unfit for office, and the commentary and shock and disgust here bears that out. My God.”

Bloomberg: “Tyson Foods said it’s idling its largest pork plant, making it at least the sixth major U.S. meat facility to shutter in the last few weeks. Currently, about 15% of hog-slaughtering capacity is completely off line, and there are also additional slowdowns at pork, beef and poultry companies across the nation.”