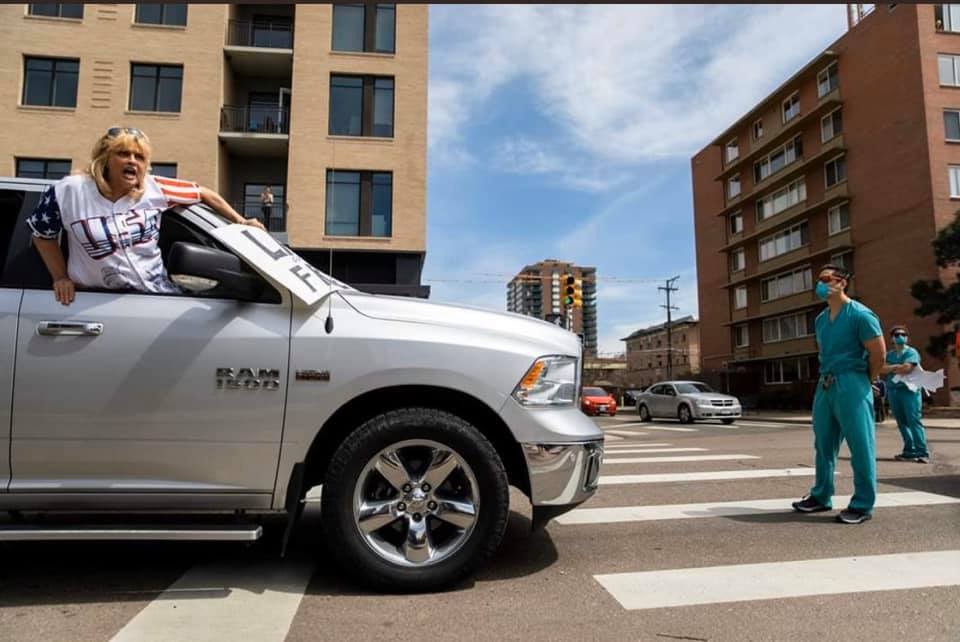 “A new small business rescue package taking shape on Capitol Hill is expected to include $25 billion to expand coronavirus testing, but how to structure that money emerged as one of the final sticking points on Monday,” the Washington Post reports.

Democrats were pushing for a “comprehensive national testing strategy,” including “free testing for all, and expanding reporting and contact tracing. But Treasury Secretary Steven Mnuchin and other Trump administration officials were seeking a “state-driven approach and flexibility.”

President Trump tweeted that he will be signing an executive order to temporarily suspend immigration to the United States. He said he would be signing the order “in light of the attack from the Invisible Enemy, as well as the need to protect the jobs of our GREAT American Citizens.”

It’s all for show. A distraction from his unmitigated and malignant incompetence. The Wall Street Journal says President Trump’s order to “suspend immigration” won’t really change much.

“Administration officials said the order wouldn’t make substantial changes to current U.S. policy. Even without an executive order, the administration has already all but ceased nearly every form of immigration. Most visa processing has been halted, meaning almost no one can apply for a visa to visit or move to the U.S. Visa interviews and citizenship ceremonies have been postponed and the refugee program paused … Migrants caught crossing the border are now immediately expelled once they are found.”

Some restaurants and theaters will also be able to reopen with strict social distancing guidelines.

A new Yahoo News/YouGov Poll finds that 71% of Americans are more worried about lifting the restrictions too quickly, while 29% are worried it will happen too slowly.

“A majority of Democrats (87%) and about half of Republicans (51%) agree that the country should only reopen once public-health officials are fully able to test and trace new cases and outbreaks—and most Americans (52%) recognize that the country is not currently conducting enough COVID-19 testing to track future outbreaks of the virus.”

A new NBC News/Wall Street Journal poll found that 65% of Americans say President Trump did not take the coronavirus “seriously enough at the beginning.”

That echoes a Pew Research Center survey that showed 65% believe Trump was “too slow to take major steps” to address the situation.

Idaho state Rep. Heather Scott (R) has suggested workers deemed “nonessential” during the coronavirus pandemic are being treated like Jews during the Holocaust, the Idaho Spokesman Review reports.

Scott compared Gov. Brad Little’s (R) shutdown orders to Nazi Germany, referred to the governor as “Little Hitler” and questioned his authority to decide who can and can’t continue working during the pandemic.

“The price for a barrel of West Texas Intermediate crude to be delivered next month plunged 93% to $1.21 in Monday’s trading, the lowest price since the futures contract was launched in 1983. If that barrel were to be delivered to a buyer in November, it would be worth more than twenty five times as much,” the Wall Street Journal reports.

“The unusually large difference in price between oil now and then has traders filling up tankers and setting them adrift. The bet is that the coronavirus pandemic runs its course and later this year demand for oil—and thus its price—will jump.”

“The White House ordered federal agencies on Monday to begin preparing to return workers to offices, telling them to align their coronavirus reopening plans with those of the states and municipalities where they’re located,” Bloomberg reports.

The head of the World Health Organization has warned that “the worst is yet ahead of us” in the coronavirus outbreak, raising new alarm bells about the pandemic just as many countries are beginning to ease restrictive measures, Politico reports.

He added: “Trust us. The worst is yet ahead of us. Let’s prevent this tragedy. It’s a virus that many people still don’t understand.”

Politico: “The White House pledged over two weeks ago to cover coronavirus treatment for uninsured Americans — but the administration still doesn’t have a plan for how to do it. Trump officials are still grappling with key questions about how exactly to implement the treatment fund, including how to determine if a patient qualifies for the new federal dollars.”

“Adding to the challenge, they’re still figuring out how to divvy up funding that hospitals and physicians say is desperately needed. The delay in setting up the fund indicates the difficulty building a massive entitlement on the fly amid an unprecedented crisis. And there was little time to fully vet the plan before President Trump announced it earlier this month.”

In an ABC News interview, Dr. Anthony Fauci warned those protesting stay-at-home orders that their efforts would backfire.

Said Fauci: “If you jump the gun, and go into a situation where you have a big spike, you’re going to set yourself back. So as painful as it is to go by the careful guidelines of gradually phasing into a reopening — it’s going to backfire. That’s the problem.”

“The response to the coronavirus pandemic in the United States and other countries has been hobbled by a host of factors, many involving political and regulatory officials. Resistance to social distancing measures, testing debacles, and longtime failures to prepare for the possibility of a pandemic all played a role,” STAT reports.

“But a subtler, less-recognized factor contributed to the wasting of precious weeks in January and February, when preparations to try to stop the virus should have kicked immediately into high gear.”

“Magical thinking — you could call it denial — hampered the ability of even some of the most seasoned infectious diseases experts to recognize the full threat of what was bearing down on the world.”

“First he was the self-described ‘wartime president.’ Then he trumpeted the ‘total’ authority of the federal government. But in the past few days, President Trump has nurtured protests against state-issued stay-at-home orders aimed at curtailing the spread of the coronavirus,” the New York Times reports.

“Hurtling from one position to another is consistent with Mr. Trump’s approach to the presidency over the past three years. Even when external pressures and stresses appear to change the dynamics that the country is facing, Mr. Trump remains unbowed, altering his approach for a day or two, only to return to nursing grievances.”

“President Trump is preparing for a long battle with America’s governors to save himself from the political fallout from coronavirus,” Politicoreports.

“Over the next two weeks at the urging of the Trump administration, the map of the U.S. will start to resemble a patchwork quilt, with some states open for business while others remain locked down because of the spread of the virus.”

“Trump has said the onus for reopening states lies with their leaders, but he has simultaneously tried to pressure governors into restarting businesses and relaxing health guidelines as soon as possible.”

“When President Trump was asked at Sunday’s White House coronavirus task force briefing why he didn’t warn Americans in February that the virus was spreading and implement social distancing earlier, Trump’s response was to go back to late January, when he issued the travel restrictions on Chinese people coming to the United States,” the Washington Post reports.

“In other words: More than two months into this crisis, Trump doesn’t have an answer for why he didn’t do more in this crucial window to prepare the country for the coronavirus.”

“On Sunday, Trump got defensive when a reporter asked him why his administration had not done more to prepare.”