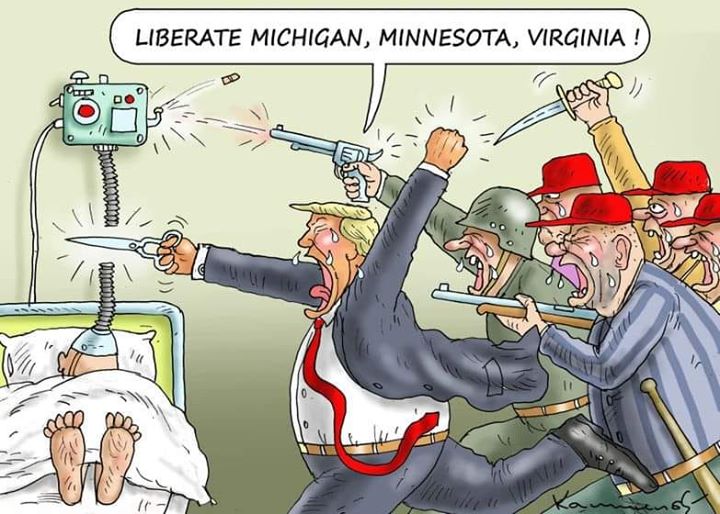 “More than a dozen U.S. researchers, physicians and public health experts, many of them from the Centers for Disease Control and Prevention, were working full time at the Geneva headquarters of the World Health Organization as the novel coronavirus emerged late last year and transmitted real-time information about its discovery and spread in China to the Trump administration,” the Washington Post reports.

“The presence of so many U.S. officials undercuts President Trump’s charge that the WHO’s failure to communicate the extent of the threat, born of a desire to protect China, is largely responsible for the rapid spread of the virus in the United States.”

Treasury Secretary Steven Mnuchin told CNN that he thinks the economy will rebound from the coronavirus pandemic within months.  Said Mnuchin: “I think it will be months. I definitely don’t think it will be years.”

Virginia Gov. Ralph Northam (D) told CNN that his state does not have the necessary coronavirus testing capacity, directly challenging comments made by President Trump yesterday.  Said Northam: “That’s just delusional to be making statements like that.” He added: “Our president has been unable to deliver on tests, now he has chosen to focus on protests, and this is not the time for protests.”

Sen. Angus King (I-ME) told Vice President Mike Pence on a private call the administration’s failure to develop an adequate national testing regime for coronavirus infections is a “dereliction of duty,” the AP reports. King later told officials: “I have never been so mad about a phone call in my life.”

“Frankly, I don’t pay that much attention to the president’s tweets against me. As I’ve said, he’s a poor leader. He’s always trying to avoid responsibility and assign blame.” — Speaker Nancy Pelosi, on ABC News.

“In a nation where most health coverage is hinged to employment, the economy’s vanishing jobs are wiping out insurance in the midst of a pandemic,” the Washington Post reports.

“No one has a count of exactly how many people have lost their health plans, but there are clues. About 22 million workers have filed unemployment claims since mid-March, according to the most recent federal figures, and that includes only the people who have gotten through to clogged state workforce offices. The latest census data show that job-based coverage accounted for 55 percent of Americans’ health insurance, though the kinds of work disappearing the most — restaurant jobs and others in the service industry — have always been less likely to offer health benefits.”

Washington Post: “Local news aired photos and videos of Florida’s shoreline dotted with people, closer than six feet apart, spurring #FloridaMorons to trend on Twitter after Gov. Ron DeSantis (R) gave the go-ahead for local beachfront governments to decide whether to reopen their beaches during a news briefing Friday.”

“On the same day that Florida reported 58 deaths from the coronavirus — its highest daily toll since the pandemic began — DeSantis told reporters that it’s essential that Floridians get exercise outdoors.”

South Carolina Gov. Henry McMaster (R) on Monday will announce the reopening of public beaches and retail stores that had been closed due to the coronavirus pandemic, the Charleston Post and Courier reports.

British Prime Minister Boris Johnson missed multiple emergency meetings on the coronavirus as it spread rapidly and ignored warnings from scientists about its lethality, the Sunday Times reports.

The result was Britain lost “a crucial five weeks in the fight to tackle the dangerous threat of coronavirus” and my have cost thousands of lives.

Johnson, who is still recovering from Covid-19, skipped five of the government’s emergency meetings in January and February held to discuss the pandemic.

President Trump absurdly claimed he saved “billions” of lives with his measures against the coronavirus. Said Trump: “It could have been billions of people if we had not done what we did.” The entire population of the U.S. is just 330 million.

President Trump said on Saturday that China should face unspecified consequences if it was “knowingly responsible” for the coronavirus pandemic, Reuters reports..

Said Trump: “If it was a mistake, a mistake is a mistake. But if they were knowingly responsible, yeah, I mean, then sure there should be consequences.”

“Rhode Island is the only state conducting enough coronavirus tests right now to safely reopen the economy, according to new guidance from researchers at Harvard University,” WPRI reports.

“Much of the $350 billion in the Small Business Administration’s emergency coronavirus relief fund was effectively spoken for within the first minutes of launch,” NBC News reports. Said a JPMorgan Chase executive: “We didn’t even get through the first five minutes of applications.”

“The United States is embarking on a rapid-fire experiment in borrowing without precedent, as the government and corporations take on trillions of dollars of debt to offset the economic damage from the coronavirus pandemic,” the Washington Post reports.

“The federal government is on its way this year to spending $4 trillion more than it collects in revenue, analysts say, a budget deficit roughly twice as large relative to the economy as in any year since 1945.”

“Business borrowing also is setting records. Giant corporations such as ExxonMobil and Walgreens, which binged on debt over the past decade, now are exhausting their credit lines and are tapping bondholders for even more cash.”

Rep. Jim Jordan (R-OH) told Fox News he believes Congress should return to work and the House Judiciary Committee should have hearings about governors who issued stay-at-home orders.