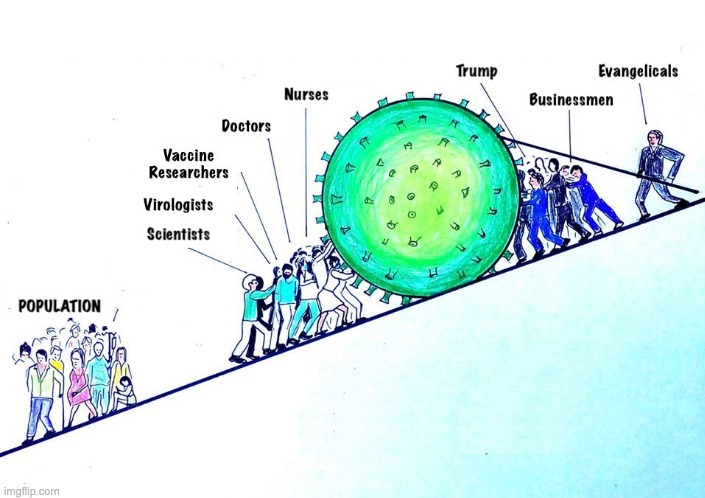 Moore, who is a member of the White House council to reopen the country, told The Washington Post in a Friday night report that the stay-at-home order protesters indicate “a boiling point that has been reached and exceeded” and that he likens them to Park.

“I call these people the modern-day Rosa Parks — they are protesting against injustice and a loss of liberties,” Moore said.

Moore was swiftly derided for his remarks shortly after the Post published its report.

Rick Wilson: “Donald Trump fired the first shots in the COVID Civil War this week, a modern-day Jefferson Davis of the Pro-Plague States of America sending his opening salvo from Fort Twitter at Democratic governors who dared to question if it wasn’t just a wee bit early to end the stay-at-home orders in states still far to the left of the peak.”

“He started the week with claims of ‘total authority’ and then cried about a supposed mutiny by mouthy state leaders. By Friday, he was up to calls to ‘liberate’ states.”

“President Trump on Saturday repeatedly blamed governors for not making full use of coronavirus testing capacity in their states, even as several Democrat and Republican governors said they are facing shortages of critical supplies to conduct tests,” CNN reports.

With sights set on the general election, Joe Biden’s campaign is launching its first set of targeted digital ads in battleground states that focus on President Trump’s lack of preparation in handling coronavirus, NBC News reports.

“U.S. manufacturers shipped millions of dollars of face masks and other protective medical equipment to China in January and February with encouragement from the federal government,” the Washington Post reports.

“The move underscores the Trump administration’s failure to recognize and prepare for the growing pandemic threat.”

“In those two months, the value of protective masks and related items exported from the United States to China grew more than 1,000 percent compared with the same time last year — from $1.4 million to about $17.6 million.”

“The failure by the Centers for Disease Control and Prevention to quickly produce a test kit for detecting the novel coronavirus was triggered by a glaring scientific breakdown at the CDC’s central laboratory complex in Atlanta,” the Washington Post reports.

“The CDC facilities that assembled the kits violated sound manufacturing practices, resulting in contamination of one of the three test components used in the highly sensitive detection process, the scientists said.”

“The strategy could not be clearer: From the Republican lawmakers blanketing Fox News to new ads from President Trump’s super PAC to the biting criticism on Donald Trump Jr.’s Twitter feed, the G.O.P. is attempting to divert attention from the administration’s heavily criticized response to the coronavirus by pinning the blame on China,” the New York Times  reports.

“But there is a potential impediment to the G.O.P. plan — the leader of the party himself.”

“Eager to continue trade talks, uneasy about further rattling the markets and hungry to protect his relationship with President Xi Jinping at a moment when the United States is relying on China’s manufacturers for lifesaving medical supplies, Mr. Trump has repeatedly muddied Republican efforts to fault China.”

“President Trump and Russian President Vladimir Putin appear to have had more sustained contact with each other in the past two weeks than at any time since 2016, as the Kremlin tries to use the coronavirus pandemic and close personal ties between the two leaders to normalize long-strained relations with Washington,” CNN reports.

“The two leaders spoke on the phone at least four times over a two-week period, beginning March 30 and ending on Sunday, a record pace for publicly known phone calls between the leaders.”

Inslee also accused the president of “spreading lies even while his own administration says the virus is real and is deadly, and that we have a long way to go before restrictions can be lifted.”

“Thousands of U.S. hotels have volunteered to help local authorities house doctors, nurses and other medical personnel at reduced rates — or even free — during the covid-19 pandemic,” the Washington Post reports.

“President Trump’s White House has praised these efforts. But so far, none of Trump’s own hotels are known to be participating.”

“Because of the colossal impact that the coronavirus outbreak has had on the U.S. economy, less than half of Los Angeles County residents — 45% compared with 61% in mid-March — still hold a job, a decline of 16 percentage points, or an estimated 1.3 million jobs,” the Los Angeles Times reports.

“President Trump’s decision to hand pandemic recovery over to states and businesses amounts to a bet that Americans won’t hold him responsible if there are setbacks — and that he can still claim credit if governors succeed,” Bloomberg reports.

“The risk for Trump is that governors and top executives may be far more cautious than he’d like in reopening the U.S. for business. That’s setting up a collision over how fast to lift social-distancing restrictions that have crushed the economy, and less than 24 hours after announcing his plan, Trump couldn’t disguise his impatience.”

Michael Cohen has been spending his time behind bars writing an explosive tell-all book about his stint as President Trump’s personal lawyer and plans on releasing it before the election, the Daily Beast reports.

“As some governors consider easing social distancing restrictions, new estimates by researchers at Harvard University suggest that the United States cannot safely reopen unless it conducts more than three times the number of coronavirus tests it is currently administering over the next month,” the New York Times reports.

“That level of testing is necessary to identify the majority of people who are infected and isolate them from people who are healthy, according to the researchers.”

Washington Post: “With the number of the covid-19 tests hovering at an average of 146,000 a day, businesses leaders and state officials are warning the Trump administration that they cannot safely reopen the economy without radically increasing the number of available tests — perhaps into the millions a day — and that won’t happen without a greater coordinating role by the federal government.”

“Treasury Secretary Steven Mnuchin and top Democrats negotiated on Friday to break an impasse over replenishing a stimulus program to help small businesses weather the coronavirus pandemic, even as some Republicans privately worried that Mr. Mnuchin would concede too much in his zeal to unfreeze a critical aid initiative,” the New York Times reports.

“Top Republicans had steadfastly refused to discuss a deal with Democrats on their demands to couple an infusion for the small-business program — the Paycheck Protection Program — with more money for states, cities and hospitals to combat the virus. But after the funding lapsed on Thursday, they expressed the first hints of openness to accepting additional hospital or grant funding beyond the administration’s request for $250 billion to keep the small-business program afloat.”

“A standoff over replenishing a popular loan program for small businesses showed signs of easing Friday, as a top Republican backed pairing it with hospital funding, one of the measures sought by Democrats in their negotiations with Treasury Secretary Steven Mnuchin over the next round of coronavirus aid,” the Wall Street Journal reports.

“Reflecting a shift in the negotiations, House Minority Leader Kevin McCarthy (R-CA) said that he would support combining hospital funding with an additional $250 billion for the Paycheck Protection Program, or PPP, a small-business loan program aimed at keeping workers employed that exhausted its initial $350 billion allocation on Thursday.”

“A growing number of Republican lawmakers across the country are pushing for a more rapid reboot of the American economy amid the coronavirus pandemic, arguing that the risk of spreading more sickness — and even death — is outweighed by the broader economic damage that widespread stay-at-home orders have wrought,” the Washington Post reports.

“They are taking cues from and breathing energy into a grass-roots conservative movement of resistance against government-ordered quarantine measures — one that President Trump appeared to back in several tweets Friday — but are facing defiance within their own party from Republican congressional leaders, governors and fellow lawmakers who warn that a rash reopening could reinvigorate the virus’s spread.”

NBC News: Trump says some state orders are “too tough.”