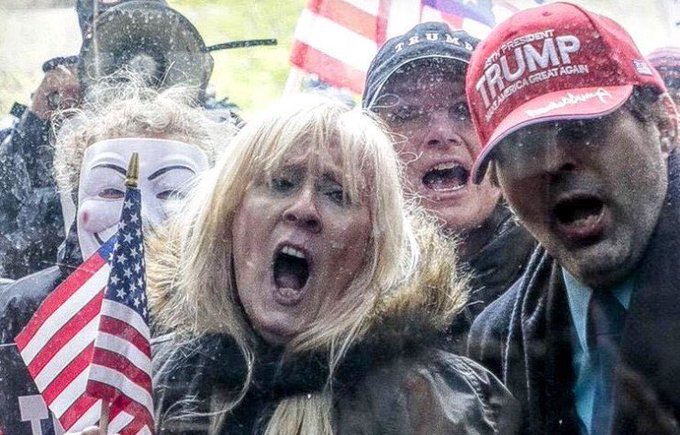 The Labor Department announced U.S. weekly jobless claims totaled 5.245 million last week, compared to an estimate of 5.0 million by economists. More than 20 million Americans have now filed for unemployment in the last month.

The $349 billion cap for small business loans for the coronavirus stimulus was reached Thursday, taking less than two weeks to run out, Axios reports.

The draft White House plan to reopen parts of the U.S. economy is just 10 pages long, and it doesn’t offer any metrics to inform communities, NBC News reports. First Read: “That isn’t going to cut it. Any effort to reopen the country is going to require careful coordination — and lots of money.”

Jonathan Swan: “If Trump starts urging parts of the country to get back to work, his supporters in those states will want to follow his lead. Multiply what’s happening now by several times, and we could see major clashes across the country between cautious governors and angry, impatient constituents. This will likely be exacerbated as red states, including Texas, start coming back online.”

The “task force” advising President Trump on how to reopen the economy was assembled so quickly that many members were not formally invited and only heard their names mentioned at the president’s daily coronavirus briefing.

The official reason for the creation of the task force is to advise Trump on how he might ease social distancing restrictions in order to ramp up economic activity. The president also admitted it was to counterbalance the views of public health officials who are still urging caution.

But the Washington Post suggests Trump is actually looking for cover for what could prove to be a deeply unpopular decision that might backfire and result in thousands of more deaths.

“Trump’s advisers are trying to shield the president from political accountability should his move to reopen the economy prove premature and result in lost lives, and so they are trying to mobilize business executives, economists and other prominent figures to buy into the eventual White House plan, so that if it does not work, the blame can be shared broadly, according to two former administration officials familiar with the efforts.”

So basically Trump is trying to lure business leaders into sharing the guilt in the fairly likely chance that the country sees a massive resurgence in the virus because social distancing was lifted too early. The CEOs sensed the trap. That’s why they pushed back vigorously on a video conference call yesterday and urged Trump to ramp up testing nationwide before lifting any restrictions.

Politico: “The answer from much of corporate America — though perhaps not from some frontline businesses like restaurants and bars — is not to panic at these numbers and try and force a hard reboot of the economy on May 1, as Trump seems to want. That could lead to further shutdowns, more virus spread and more panic. Instead, the preferred approach is take the big hits now, get the virus in check, and restore people’s sense of safety while providing them with as much financial support as possible. Only then can the economy truly start to crawl back toward anything resembling normal.”

Jonathan Bernstein: “The most important thing to know about President Trump’s out-of-nowhere threat to adjourn Congress and make recess appointments because Democrats are blocking his executive-branch nominees isn’t whether he can do it or whether he should. It’s that his complaint is entirely untrue: Democrats aren’t blocking his executive-branch nominees.”

“This is just basic Senate procedure. Republicans hold a 53-to-47 majority, and also win tie votes because they hold the vice presidency. That means they have majorities in every committee, and they schedule final confirmation votes for every nominee who clears those committees.”

“To be sure, Democrats can still stall this procedure … for two hours. So it’s entirely fair for the president to complain about that delay.”

But the odds of that are so infinitesimal they are hardly calculable. Pelosi can essentially ignore the resolution from the Senate, starving Trump of the disagreement he needs to adjourn unilaterally. Ah, you say, it’s privileged, and thereby gets immediate consideration? Nah. Pelosi can turn off the privilege in a rule with a simple majority vote and then she doesn’t have to touch it. No disagreement, no adjournment from Trump.”

Los Angeles may hold off on allowing big gatherings until 2021 because of the coronavirus threat, according to an internal email reviewed by the Los Angeles Times.

New York Gov. Andrew Cuomo has hired high-powered consultants to develop a science-based plan for the safe economic reopening of the region that can thwart expected pressure from President Trump to move more rapidly, Reuters reports.

Said one Cuomo adviser: “We think Trump ultimately will blink on this, but if not, we need to push back, and we are reaching out to top experts and other professionals to come up with a bullet-proof plan.”

Politico: “Trump and red state governors for weeks have fairly bragged about how large parts of the farm belt have escaped the ravages of the virus without the enforced shelter-in-place policies common on both coasts. It’s still unclear whether the states actually ‘flattened the curve,’ or if the virus just reached there later.”

“But now, cases are erupting, threatening a local population that doesn’t always have easy access to the same health care as more urban areas. And the outbreaks are striking the heart of the nation’s farming and meatpacking industry, potentially disrupting the national distribution of food as meat processing plants close down and truckers who move food across the country are sidelined by illness.”

Washington Post: “More than 10,000 employees, on a normal day, are spread across the Capitol, seven office buildings for lawmakers and committees, the Capitol Police headquarters, the Library of Congress and a dormitory for Senate pages.”

“The most basic duties — 100 senators showing up for a roll call, or up to 435 members of the House voting — are inherent violations of federal health guidelines that say groups should be limited to no more than 10 people.”

“And then there are the dozens of members of the House who, rather than rent or own a private apartment, live in their offices. Each morning these lawmakers use showers in the House gym to get ready for that day’s work representing their constituents.”

Associated Press: “Workers back on the job are wary of spending much or going out. Shoppers are staying away from the few stores reopening. Masks and social distancing measures are not fading. And pervasive is the fear the virus could return if lockdowns meant to stop its spread are eased too much, too quickly.”

“Still, leaders are anxious to reopen factories, schools and shops and to repair the economic damage from the pandemic that has infected more than 2 million people and claimed more than 137,000 lives. Some Chinese cities tried reassuring consumers by showing officials eating in restaurants.”

“In late February when President Trump was urging Americans not to panic over the novel coronavirus, alarms were sounding at a little-known intelligence unit situated on a U.S. Army base an hour’s drive north of Washington,” the AP reports.

“Intelligence, science and medical professionals at the National Center for Medical Intelligence were quietly doing what they have done for decades — monitoring and tracking global health threats that could endanger U.S. troops abroad and Americans at home.”

“On Feb. 25, the medical intelligence unit raised its warning that the coronavirus would become a pandemic within 30 days from WATCHCON 2 — a probable crisis — to WATCHCON 1 — an imminent one… That was 15 days before the World Health Organization declared the rapidly spreading coronavirus outbreak a global pandemic.”

Washington Post: “Roughly a quarter of Michigan’s eligible workforce is now trying to obtain unemployment aid, according to state officials, a staggering example of the economic carnage wrought by the coronavirus in a state that’s no stranger to financial struggle.”

“More than a decade ago, the Great Recession ravaged manufacturing and imperiled cities here from Saginaw to Detroit, leaving people homeless, jobless, hungry, and in some cases, struggling to get aid. Recovery came slowly, and unequally, as many state programs were slashed and some factory jobs never returned at all.”

“Now, state and local leaders find themselves grappling with a more dire threat: a global health emergency in which Michigan has emerged as a major national hot spot. In response, government officials here are bracing for yet another economic crisis, this time perhaps on the magnitude of the Great Depression.”

“The Trump administration is expected on Thursday to weaken regulations on the release of mercury and other toxic metals from oil and coal-fired power plants, another step toward rolling back health protections in the middle of a pandemic,” the New York Times reports.

“The final Environmental Protection Agency rule does not eliminate restrictions on the release of mercury, a heavy metal linked to brain damage. Environmental lawyers said the new method of calculating the costs and benefits of curbing mercury pollution would most likely destroy the legal underpinnings of controls on mercury and many other pollutants.”

Colorado Gov. Jared Polis (D) “grew tearful as he responded Wednesday to a top Republican official comparing stay-at-home orders to the actions of the Gestapo, the secret police of Nazi Germany and European countries under Nazi occupation during World War II,” the Denver Post reports.

Said Polis: “As a Jewish American who lost family in the Holocaust, I’m offended by any comparison to Nazism. We act to save lives — the exact opposite of the slaughter of 6 million Jews and many gypsies and Catholics and gays and lesbians and Russians and so many others.”

“The move is designed to assert more White House control over Health and Human Services Secretary Alex Azar, whom officials believe has been behind recent critical reports about President Trump’s handling of the coronavirus pandemic.”

“The Trump administration has awarded bulk contracts to third-party vendors in recent weeks in a scramble to obtain N95 respirator masks, and the government has paid the companies more than $5 per unit, nearly eight times what it would have spent in January and February when U.S. intelligence agencies warned of a looming global pandemic,” the Washington Post reports.

“Ivanka Trump has positioned herself as one of the leaders of the administration’s economic relief efforts and one of its most vocal advocates of social distancing,” the New York Times reports.

“But Ms. Trump herself has not followed the federal guidelines advising against discretionary travel, leaving Washington for another one of her family’s homes, even as she has publicly thanked people for self-quarantining. And effective April 1, the city of Washington issued a stay-at-home order for all residents unless they are performing essential activities.”