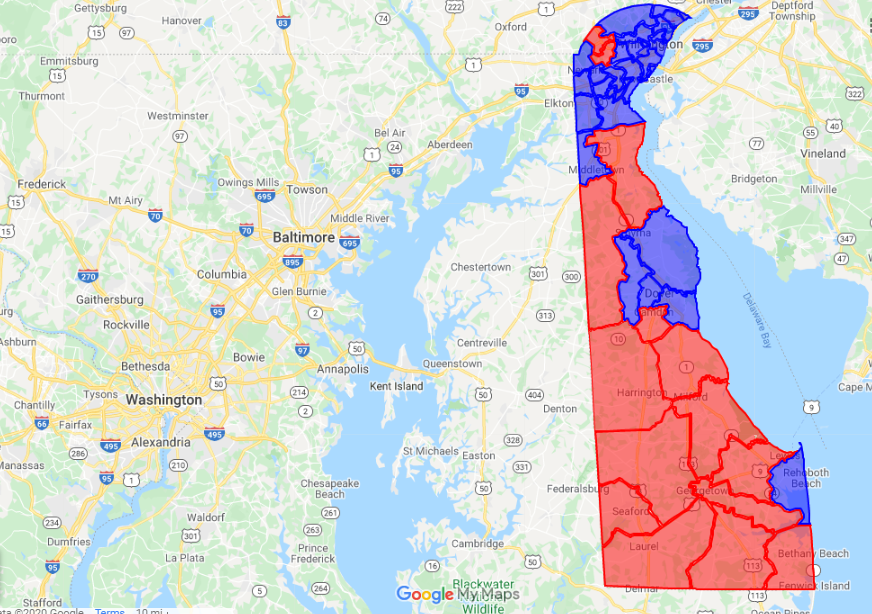 For several years in the 2000’s and the 2010’s, reform minded Democratic Senators and Representatives, along with some younger Republicans, would file a Independent Redistricting Reform bill. Redistricting is not that big of a deal in Delaware on a Federal level, since we only have one congressional district, and on the state legislative level, while there are some weird or nonsensical boundaries here and there (like putting the highly Democratic middle class Fairfax/McDaniels neighborhoods east of Concord Pike into the more Republican and wealthy 12th RD), gerrymandering has not been that egregious in Delaware.

Still, there is the potential for chicanery and unfairness and unequal representation. As such, placing these decisions in the hands of an Independent Redistricting Commission was the aim of Senator Bryan Townsend’s Senate Bill 27 in the last session of the General Assembly. That bill passed the Senate in April 2017 by a vote of 12-7-1-1, with Republican Senators Anthony Delcollo and Brian Pettyjohn voting yes and Cathy Cloutier not voting. The bill did not get a vote in the House, mostly likely due to House Speaker Pete Schwartzkopf’s opposition to the bill.

Now the Republicans have picked up the Redistricting Reform mantle, and Rep. Michael Smith and Sen. Anthony Delcollo have introduced House Bill 309. But this bill does not set up an Independent Commission. It sets up a protocol where the Majority Party Caucus of a chamber gets to initially draw all the legislative districts, observing established legal redistricting standards. The Minority Party Caucus of the chamber then will have the ability to “freeze” a set number of the districts, locking their boundaries into place. They will then be able to redraw the remaining districts as they wish, delivering the new maps back to the Majority caucus. The Majority Caucus will then also engage in the freeze and redraw process, with the cycles continuing until all the districts have been defined.

LOL. I would take this bill seriously if there is a Republican controlled state legislature any where in the country that has introduced and passed this bill giving minority Democrats the same bite at the apple.

So yeah, I doubt this bill leaves the Administration Committee.