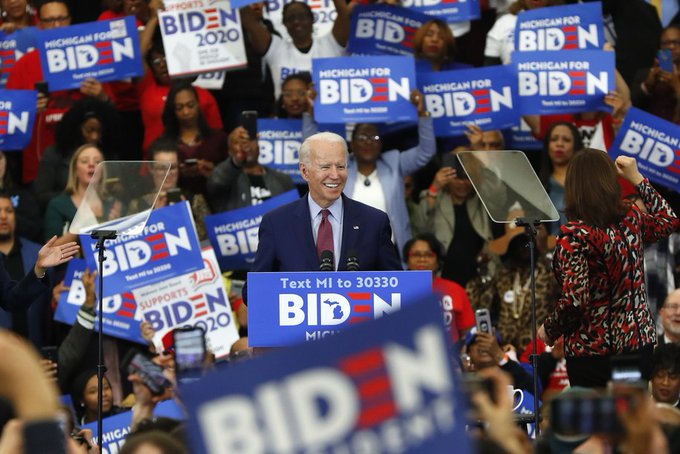 The polling averages in five Toss Up states show Biden currently leading in every one:

Amy Walter: “I have been thinking a lot about North Carolina these days. While the former ‘Blue Wall’ states get the lion’s share of coverage,  North Carolina is actually the bigger bang for the buck. It is one of just two states — the other is Arizona — to have its presidential contest and its senate race in the Toss Up column. Oh, and it also has a competitive Governor’s race.”

“How North Carolina goes is not just going to determine who wins the White House, but also who controls the Senate.”

A day after Bernie Sanders dropped out of the Democratic primary race, Joe Biden has already adopted two elements of the Democratic socialist’s agenda and credited Sanders’ energetic movement with the change, CBS News reports.

“Second, Biden wants to forgive student loan debt for those earning up to $125,000, who attended public colleges, Historically Black Colleges or Universities, or private minority-serving institutions.”

Tom Steyer told Politico that he plans to use his resources to get Joe Biden elected, joining almost every candidate who dropped from the Democratic primary race in endorsing the former vice president.

Ryan Lizza: “In the end, the most influential politician of 2020 may be the one who has been the most silent. With Bernie Sanders exiting the race and Joe Biden taking on the mantle of presumptive nominee, the man who hovered quietly over the race for more than a year, Barack Obama, will soon return to the political fray.”

“Obama wanted Sanders to have the day to himself and so he refrained from speaking (or tweeting) publicly on Wednesday. But Obama had always said his role in the primaries would be to unite the party when it’s over, and he’s been in close contact with both campaigns as the pandemic both froze the race without a clear victor and also made it more obvious that Biden would eventually prevail.”

New York Times: : “As with false claims by Republicans about vote-by-mail fraud, there is no evidence to back up the argument from the right that all-mail elections favor Democrats. But Mr. Trump and some of his allies are warning that vote-by-mail poses an existential threat to their party, in hopes of galvanizing Republican opposition to a voting method that is widely seen as safer than in-person voting in the era of the coronavirus.”

“Five states — Colorado, Hawaii, Oregon, Utah and Washington — now have all-mail elections, in which ballots are sent to every registered voter without their having to request one. Others, like Arizona and California, allow voters to add themselves to a permanent list of mail voters.”

“And there are also cases like Nebraska, which allows counties of less than 10,000 people to mail ballots to all voters (many of them Republicans) but forbids it in large urban areas (where many voters are Democrats). Texas allows no-excuse absentee voting for people 65 or older, another group that skews Republican. None of these states have seen an appreciable shift favoring Democrats that officials and experts attribute to mail voting.”

A new CBS News poll finds views on President Trump’s handling of the outbreak response have ticked down for the second consecutive week. The president is seen doing a good job by 47%, down four points from 51% last week and 53% the prior week.

Now is the first time more say he’s doing a bad job than a good one.

New York Times: “Polls suggest that faith in the president to handle the outbreak has slipped among some crucial voting blocs in the general election.”

Paul Krugman: “Yet the scariest news of the past week didn’t involve either epidemiology or economics; it was the travesty of an election in Wisconsin, where the Supreme Court required that in-person voting proceed despite the health risks and the fact that many who requested absentee ballots never got them.”

“Why was this so scary? Because it shows that America as we know it may not survive much longer. The pandemic will eventually end; the economy will eventually recover. But democracy, once lost, may never come back. And we’re much closer to losing our democracy than many people realize.”

A new Trump campaign ad features a montage of Joe Biden meeting with Chinese officials. Amid that montage (at the :39 mark) is a clip of him with Gary Locke, the former governor of Washington/Commerce secretary/ ambassador to China, who is Asian-American, but… American.

“President Trump and his allies are leaning heavily into a new 2020 strategy tying Democrats and their presumptive presidential nominee Joe Biden not just to China but to its role in spreading the coronavirus,” the Daily Beast reports.

“Inside the campaign, the strategy is simple: make China the villain of a global pandemic that has complicated well-laid electoral plans and sparked growing criticism of the president.”

Said Trump pollster John McLaughlin: “China’s among many weaknesses, but when people learn about Biden’s attack on the president’s China travel ban, his other weak positions on China, and his conflict with Hunter Biden’s business deal with China, voters are horrified.”

“Republicans are increasingly concerned not only about President Trump’s daily briefings but also his broader plan to ease the nation out of the virus crisis and back to work. This concern is acute — and spreading,” Axios reports.

“Trump can easily address the briefing worries by doing fewer, but the lackluster bounce-back planning is what worries Republicans most.”

“Some think he has only weeks to figure it out. The consequences of failure would be a November defeat, some warn.”

Politico: “The RNC is launching a seven-figure advertising campaign lavishing praise on President Donald Trump for his handling of the coronavirus outbreak, as the president confronts a sustained assault from liberal groups over his response to the crisis.”

“The $1 million-plus digital blitz, which will run across more than a dozen battleground states, is unusual: The committee rarely spends so heavily on advertising so early in an election year. But over the last several weeks, an array of liberal groups has spent millions of dollars on commercials battering Trump. On Thursday, Pacronym, a liberal super PAC, began running a web video hammering the president for initially downplaying the virus.”

“The latest scorcher of an attack ad by the Republican Lincoln Project concedes Donald Trump had other priorities before launching his lackluster battle against COVID-19. But he wasn’t distracted by impeachment, as he claims. Instead, he was too busy golfing and packing people into campaign rallies,” the HuffPost reports.

“By law, President Trump’s campaign is not allowed to coordinate with a super PAC supporting it,” the Daily Beast reports.

“But in recent months, one such ostensibly independent group has purchased access to one of the campaign’s most valuable possessions: the massive email list that it has built over the last five years.”

“As the pandemic and its economic havoc exacerbate disparities, some Gen Zers see grim validation of their support for the government-run programs and social-welfare policies less popular with their parents and grandparents,” the Washington Post reports.

“Seventy percent of them believe the government should be doing more to solve problems, compared with 53% of Gen Xers and 49% of baby boomers.”

“Hundreds of absentee ballots mailed back to the City of Madison for Tuesday’s election may not be counted, thanks to a missing postmark,” the Milwaukee Journal Sentinel reports.

“The problem is one that is emerging in communities across Wisconsin as election officials prepare to tally the results of an election conducted during the coronavirus pandemic. Results for the state Supreme Court and other races are to be released Monday.”

“President Trump this week condemned absentee voting as ‘corrupt,’ but mail-in ballots are a central Republican get-out-the-vote strategy in Florida, a state the president will need to win in November if he wants to return to the White House,” Politico reports.

“The Republican Party of Florida has spent tens of millions of dollars in recent election cycles to boost by-mail balloting, turning out more mail-in votes than Democrats in both 2016 and 2018 — a success it plans to repeat this year.”

“New Hampshire Gov. Chris Sununu (R) announced Thursday that the state will allow voters to cast mail-in ballots in the November general election if the coronavirus is still a factor this fall,” the Washington Postreports.

“The decision is a significant departure from Sununu’s past stance against widespread absentee voting and stands in contrast to the rhetoric coming from some Republicans, including President Trump.”

Ron Brownstein: “In the states that will likely decide the 2020 presidential election, Donald Trump has already lost his newly declared war against voting by mail.”

“All six of the swing states that both sides see as the most probable tipping points allow their residents to vote by mail for any reason, and there’s virtually no chance that any of them will retrench their existing laws this year. That means that, however much Trump rages, the legal structure is in place for a mail-voting surge in those decisive states: Florida, North Carolina, and Arizona in the Sun Belt and Michigan, Pennsylvania, and Wisconsin in the Rust Belt.”