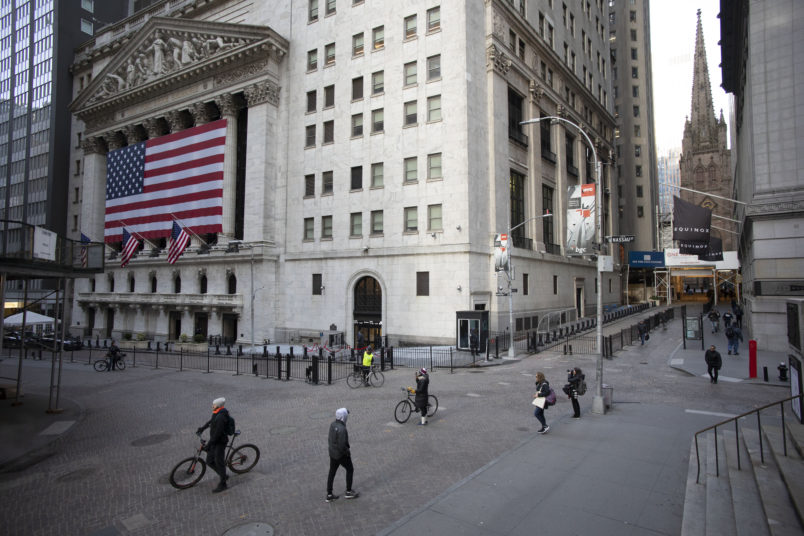 Economists surveyed by the Wall Street Journal had expected the number to be around 5 million Americans.

Washington Post: “Last week’s jobless numbers are on top of the nearly 10 million Americans who had already applied for unemployment the two previous weeks.”

Politico: “Economic forecasts are becoming routine that predict unemployment will exceed its historic 25% peak during the Great Depression, and the number of jobs lost in a mere three weeks now exceeds the 15 million that it took 18 months for the Great Recession to bulldoze in 2007-2009.”

“The Federal Reserve on Thursday unveiled emergency programs that could dole out more than $2 trillion in loans to businesses of all sizes, as well as to struggling state and city governments, in a bid to keep the economy afloat as it is ravaged by the coronavirus pandemic,” Politicoreports.

“The scope and scale of the programs underscore how serious a threat the virus poses to an economy where millions of jobs have been shed in recent weeks as businesses have shuttered across the U.S.”

CNBC has more details on the program.

“As job losses ricochet across the U.S., Europe is conducting an unprecedented experiment in navigating the economic fallout from the new coronavirus: Persuade companies to forgo layoffs by subsidizing private-sector wages on a massive scale,” the Wall Street Journal reports.

“More than one million companies across the continent have signed up for subsidy programs that essentially transform their payrolls into a system for delivering billions of euros in stimulus funds directly to households.”

Foreign Policy: “As the coronavirus lockdown began, the first impulse was to search for historical analogies—1914, 1929, 1941? As the weeks have ground on, what has come ever more to the fore is the historical novelty of the shock that we are living through. As a result of the coronavirus pandemic, America’s economy is now widely expected to shrink by a quarter. That is as much as during the Great Depression. But whereas the contraction after 1929 stretched over a four-year period, the coronavirus implosion will happen over the next three months. There has never been a crash landing like this before. There is something new under the sun. And it is horrifying.”

“As recently as five weeks ago, at the beginning of March, U.S. unemployment was at record lows. By the end of March, it had surged to somewhere around 13 percent. That is the highest number recorded since World War II. We don’t know the precise figure because our system of unemployment registration was not built to track an increase at this speed.”

British Prime Minister Boris Johnson has been moved out of intensive care but remains hospitalized, the Guardian reports. It’s a sign of improvement after Johnson spent three nights in intensive care for coronavirus.

“The Trump administration has carried out nearly 10,000 summary deportations or ‘expulsions’ since March 21, using emergency public health measures that have given U.S. Customs and Border Protection broad authority to bypass immigration laws,” the Washington Post reports.

“The measures have allowed the agency to quickly turn away most unauthorized migrants — sending them back across the U.S.-Mexico border. The moves have dramatically slashed the number of detainees held in border stations, where they fear the coronavirus could spread, the officials said. CBP has fewer than 100 detainees in custody, down from nearly 20,000 at this time last year during the border crisis.”

The arrest warrants that Jerry Falwell Jr. said were issued for misdemeanor trespassing for a New York Times photographer and ProPublica reporter were actually issued by a member of Liberty University’s campus police and do not appear to have legal weight, Business Insider reports.

Treasury Secretary Steven Mnuchin told CNBC that he believed it was possible that the U.S. could open back up for business next month, following the effective halt of the economy because of coronavirus.

Said Mnuchin: “I think as soon as the president feels comfortable with the medical issues.”

“The number of Americans getting on airplanes has sunk to a level not seen in more than 60 years as people shelter in their homes to avoid catching or spreading the new coronavirus,” the AP reports.

“The Transportation Security Administration screened fewer than 100,000 people on Tuesday, a drop of 95% from a year ago.”

“The official tally of 97,130 people who passed through TSA checkpoints exaggerates the number of travelers — if that is possible — because it includes some airline crew members and people still working at shops inside airport security perimeters. Historical daily numbers only go back so far, but the nation averaged 97,000 passengers a day in 1954… It was the dawn of the jet age.”

Senate Democrats on Thursday blocked a Republican push for unanimous consent to pass a bill to put $250 billion more into a loan program for small businesses devastated by the coronavirus pandemic, CNBC reports.

Sen. Ben Cardin (D-MD) called the attempt to force a bill without negotiating with Democrats a “political stunt.”

New York Times: “The world began this week to see small but encouraging signs that concerted efforts to drastically change human behavior — to suspend daily routines by staying at home — are slowing the insidious spread of the novel coronavirus, which has killed tens of thousands and sickened more than a million others across several continents.”

“But — a simple word that epidemiologists say cannot be emphasized enough — these early indications, while promising, must not be interpreted to mean that all will be well by summer’s first days. Although President Trump tweeted on Monday about a light at the end of a tunnel, the cautions of scientists and other government officials conjure one very, very long tunnel.”

“Tucked into the recent recovery bill was a provision granting the Federal Reserve the right to set up a $450 billion bailout plan without following key provisions of the federal open meetings law, including announcing its meetings or keeping most records about them,” Politico reports.

“The provision, the existence of which has not been previously reported, further calls into question the transparency and oversight for the biggest bailout law ever passed by Congress. President Trump has indicated he does not plan to comply with another part of the new law intended to boost Congress’ oversight powers of the bailout funds…”

“The changes at the central bank – which appear to have been inserted into the 880-page bill by sympathetic senators during the scramble to get it approved — would address a complaint that the Fed faced during the 2008 financial crisis, when board members couldn’t easily hold group conversations to address the fast-moving economic turmoil.”

“First, it was the media that was at fault. Then, Democratic governors came under fire. China, President Barack Obama and federal watchdogs have all had a turn in the crosshairs. And now it’s the World Health Organization that’s to blame,” the AP reports

“President Trump is falling back on a familiar political strategy as he grapples with the coronavirus pandemic: deflect, deny and direct blame elsewhere.”

“As he tries to distance his White House from the mounting death toll, Trump has cycled through a long list of possible scapegoats in an attempt to distract from what critics say were his own administration’s missteps in slowing the spread of the coronavirus on American shores.”

Wall Street Journal editorial: “The President’s outbursts against his political critics are also notably off key at this moment. This isn’t impeachment, and Covid-19 isn’t shifty Schiff. It’s a once-a-century threat to American life and livelihood.”

“Congress assured America that its frenzied rush to deliver $2 trillion in coronavirus relief wouldn’t lead to waste, fraud or abuse because they packed the sprawling law with powerful safeguards,” Politico reports.

“Yet, as the Trump administration begins pumping billions of taxpayer dollars into the economy, none of the built-in oversight mechanisms are even close to functional. And their absence will soon be glaringly obvious as the gusher of cash and extraordinary new power granted to the administration fuels massive logjams, headaches and fear across overburdened hospitals, overcrowded unemployment offices and many sectors of the ailing economy.”