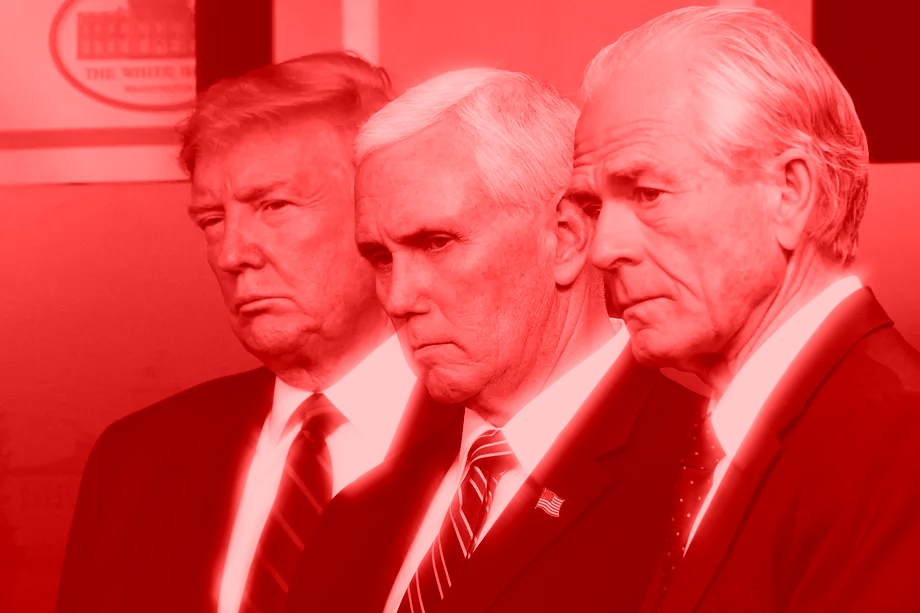 New York Times: “A top White House adviser starkly warned Trump administration officials in late January that the coronavirus crisis could cost the United States trillions of dollars and put millions of Americans at risk of illness or death.”

“The warning, written in a memo by Peter Navarro, President Trump’s trade adviser, is the highest-level alert known to have circulated inside the West Wing as the administration was taking its first substantive steps to confront a crisis that had already consumed China’s leaders and would go on to upend life in Europe and the United States.”

Axios has more on the memo.

At his daily briefing on the coronavirus pandemic, President Trump announced that the United States will stop sending money to the World Health Organization. Trump blamed the WHO for the public health crisis, noting that they “blew it.” No, he blew it because he did not read his briefing materials.

“President Trump has upended the panel of federal watchdogs overseeing his implementation of the $2 trillion coronavirus law, tapping a replacement for the Pentagon official who was supposed to lead the effort.” Politico reports.

“A panel of inspectors general had named Glenn Fine — the acting Pentagon watchdog — to lead the group charged with monitoring the coronavirus relief effort. But Trump on Monday removed Fine from his post, instead naming an EPA inspector general to serve as the temporary Pentagon watchdog.”

Washington Post: “Fine, a career official who will remain a deputy inspector general, had been chosen for the spending role by a committee of inspectors general. The move will be seen by some as another instance of the president chafing at independent oversight.”

Associated Press: “In four days, Trump has fired one inspector general tied to his impeachment, castigated another he felt was overly critical of the coronavirus response and sidelined a third meant to safeguard against wasteful spending of the coronavirus funds.”

“The actions have sent shock waves across the close-knit network of watchdog officials in government, creating open conflict between a president reflexively resistant to outside criticism and an oversight community tasked with rooting out fraud, misconduct and abuse.”

New York Times: “If hydroxychloroquine becomes an accepted treatment, several pharmaceutical companies stand to profit, including shareholders and senior executives with connections to the president. Mr. Trump himself has a small personal financial interest in Sanofi, the French drugmaker that makes Plaquenil, the brand-name version of hydroxychloroquine.”

Donald Trump’s “acting” Navy Secretary Thomas Modly has now resigned, according to reporting by The Wall Street Journal, amid growing calls for his removal by lawmakers and retired military officials.

Calls for Modly’s resignation mounted in the wake of Modly’s firing of USS Theodore Roosevelt Capt. Brett Crozier, and a subsequent address to the ship’s crew in which Modly demeaned and insulted Crozier while justifying his own decision. Modly issued an apology for those remarks afterwards.

Capt. Crozier was removed by Modly for authoring a four-page letter urgently requesting quarantine quarters for his coronavirus-infected crew, a letter that was obtained by the press but which ran contrary to Trump administration efforts to downplay the impact and severity of the emerging pandemic. Modly had stated in remarks to an interviewer that he had removed Crozier to avoid Trump’s own intervention; Modly’s predecessor, Richard Spencer, was removed amid the scandal of Trump reaching down through the chain of command to pardon Navy war criminal Edward Gallagher.

ABC News White House correspondent Jon Karl, who was called a “third-rate reporter” by President Trump yesterday, told The View that the president was picking fights with reporters to avoid responsibility for his response to the coronavoirus pandemic.

Said Karl: “Well, it has happened with alarming consistency. At virtually every one of these briefings, there is a moment where he lashes out in very personal terms at a reporter. I have to say, I hear that he is spending a good chunk of each day complaining to his top advisers about the way his response to this crisis is being portrayed in the news media. He truly cares about this and is, to a degree, obsessed about it.”

“The lockdown that served as a model for countries battling the coronavirus around the world has ended after 11 weeks: Chinese authorities are allowing residents of Wuhan to once again travel in and out of the sprawling city where the pandemic began,” the AP reports.

Sen. David Perdue (R-GA) bought stock in a company that produces personal protective equipment the same day the Senate received a classified briefing on the spread of the novel coronavirus, the Atlanta Journal-Constitution reports.

Financial Times: “Boris Johnson remained in intensive care on Tuesday morning, with cabinet colleagues confirming that the UK prime minister had received oxygen treatment for his worsening coronavirus symptoms but he was not on a ventilator.”

David Frum: “That the pandemic occurred is not Trump’s fault. The utter unpreparedness of the United States for a pandemic is Trump’s fault. The loss of stockpiled respirators to breakage because the federal government let maintenance contracts lapse in 2018 is Trump’s fault. The failure to store sufficient protective medical gear in the national arsenal is Trump’s fault. That states are bidding against other states for equipment, paying many multiples of the precrisis price for ventilators, is Trump’s fault. Air travelers summoned home and forced to stand for hours in dense airport crowds alongside infected people? That was Trump’s fault too. Ten weeks of insisting that the coronavirus is a harmless flu that would miraculously go away on its own? Trump’s fault again. The refusal of red-state governors to act promptly, the failure to close Florida and Gulf Coast beaches until late March? That fault is more widely shared, but again, responsibility rests with Trump: He could have stopped it, and he did not.”

“The lying about the coronavirus by hosts on Fox News and conservative talk radio is Trump’s fault: They did it to protect him. The false hope of instant cures and nonexistent vaccines is Trump’s fault, because he told those lies to cover up his failure to act in time. The severity of the economic crisis is Trump’s fault; things would have been less bad if he had acted faster instead of sending out his chief economic adviser and his son Eric to assure Americans that the first stock-market dips were buying opportunities. The firing of a Navy captain for speaking truthfully about the virus’s threat to his crew? Trump’s fault. The fact that so many key government jobs were either empty or filled by mediocrities? Trump’s fault. The insertion of Trump’s arrogant and incompetent son-in-law as commander in chief of the national medical supply chain? Trump’s fault.”

“For three years, Trump has blathered and bluffed and bullied his way through an office for which he is utterly inadequate. But sooner or later, every president must face a supreme test, a test that cannot be evaded by blather and bluff and bullying. That test has overwhelmed Trump.”

Los Angeles Times: “The Social Security check that arrives each month. The unemployment benefits that help tide workers over between jobs. The security lines snaking through airports, back when millions of Americans were still flying.”

“They are so deeply embedded in today’s society that we take them for granted.”

“All were the product of crises like the COVID-19 pandemic, which made sweeping changes — political measures that once seemed politically untenable — suddenly viable and even necessary.”

Wall Street Journal: “In the scramble to contain the coronavirus financial fallout, U.S. policy makers have embraced an ambitious big-government agenda—from new worker protections to a guaranteed minimum income—that could redefine Washington’s role in the economy.”

“Both the U.S. and global economies are set to be permanently altered by the coronavirus outbreak and the measures that have been taken in response to it,” Axios reports.

Said former Fed governor Kevin Warsh: “Fundamentally there are going to be huge changes in household consumption patterns, business patterns and global supply chains… Recall how different the landscape was — not just for banks — in the last crisis. And this one seems to be having a bigger imprint on society.”

Peter Nicholas: “A president commands a formidable platform when the nation is under threat. As the pandemic worsens, Trump has been inescapable. His daily press briefings draw millions of viewers. He’s cultivated public fights with Democratic governors over scarce supplies. And he’s ignited cultural clashes by calling the novel coronavirus the ‘Chinese virus.’ As the briefings stretch into their second hour, the wartime president morphs into the aggrieved candidate, who has created a spectacle that a captive audience can’t ignore.”

“One timeline in play is how long it will take before infections subside. Another is the political calendar. The two are entwined. In this new era of social distancing, Trump can’t hold rallies as a way to mobilize his base and diminish his rivals. But he’s embraced the bully pulpit, and in his hands—and at this jarring moment in the nation’s history—it’s potentially more valuable than routine campaigning. As the election approaches, he may be more and more tempted to use it for his own purposes. His prospects now hinge, after all, on his handling of the outbreak. His focus in the coming months will be to convince voters that he led a dauntless effort to keep Americans alive.”

White House press secretary Stephanie Grisham is leaving the job without ever having briefed the press, CNN reports. She is returning to the East Wing as first lady Melania Trump’s chief of staff as President Trump’s new chief of staff Mark Meadows shakes up the communications team in the West Wing.

Jonathan Chait: “As House Democrats set to work on the next round of economic relief legislation, they face a more urgent choice than they seem to realize. If they send that bill to President Trump without measures guaranteeing voting rights during the pandemic, they are signing a death warrant for the 2020 election.”