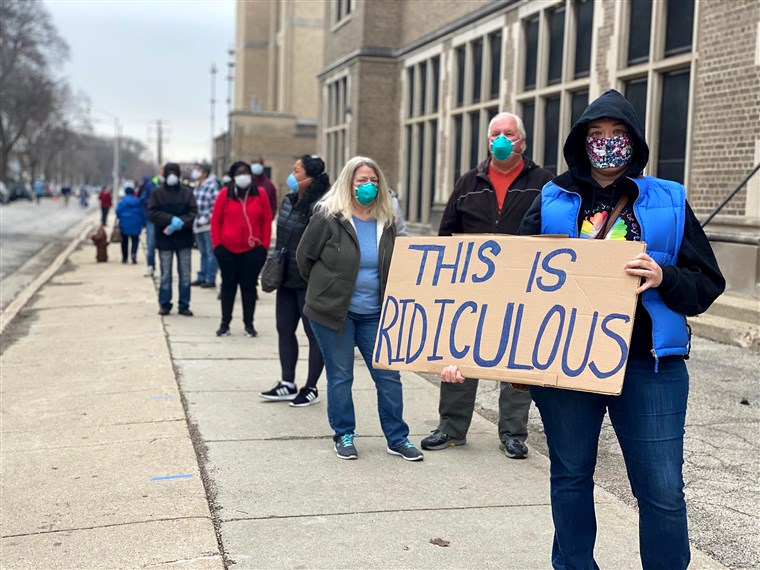 “It was an election day for the history books, unprecedented and unimaginable,” the Milwaukee Journal Sentinel reports.

“After Gov. Tony Evers tried to delay it, and the state Supreme Court declared the vote must go on, Wisconsinites went to the polls in Tuesday’s spring election and cast ballots carefully, deliberately and defiantly in the midst of the coronavirus pandemic.”

“And votes won’t be counted until Monday, another twist in the latest chapter in this only-in-Wisconsin political story.”

If you’re wondering why Republicans in Wisconsin and everywhere else oppose delaying elections and providing mail in voting, then some recent polling from Public Policy Polling reveals their nefarious motive:

Those not concerned about the virus are going to go out and vote while those who are concerned may not. Advantage Republicans. Thus, Democrats everywhere must be willing to die to vote this fall if we cannot get vote by mail everywhere. I am serious. Staying home and not voting because you are worried about contracting Corona is exactly what Trump wants. So start preparing yourself to wait in line all day long on November 3.

“Either voters will have to brave the polls, endangering their own and others’ safety. Or they will lose their right to vote, through no fault of their own.” — Justice Ruth Bader Ginsburg, quoted by the HuffPost, excoriating her conservative colleagues over their decision to deny Wisconsin Democrats’ request to extend the deadline for absentee voting in today’s primary due to the pandemic.

Said Barnes: “Good morning and welcome to the Shit Show! Today’s episode has been produced by the Supreme Court and directed by the incomparable Speaker and Senate Majority leader duo. Buckle up, this one’s sure to disappoint!”

A new CNN poll finds a majority of Americans — 55% — now say the federal government has done a poor job preventing the spread of coronavirus in the United States, up eight points in about a week.

Democrats are pouring resources into efforts to flip Sen. Joni Ernst’s (R-IA) seat and expand their electoral map in November, believing that Iowa has the potential to help decide the fate of the Senate majority, The Hill reports.

Sen. Edward Markey (D-MA) is still short the signatures he needs to get on the Democratic primary ballot for re-election, the Boston Globe reports. He has only about 7,000 of the 10,000 he needs, but the coronavirus pandemic has dramatically slowed efforts.

“Senate Majority Leader Mitch McConnell’s Democratic opponent Amy McGrath outraised the longtime senator in the first quarter of 2020 as Kentucky’s Senate race emerges as one of the most expensive battles of the election cycle,” The Hill reports.

“McGrath, who has received a litany of endorsements from national Democratic figures, reported raising $12.8 million in the first three months of 2020 and ended the period with $14.7 million cash on hand. McConnell hauled in $7.5 million and finished the first quarter of the year with $14.9 million in the bank in his bid for a seventh Senate term.”

From the presentation: “Republicans’ failure to recognize the seriousness of this pandemic is putting themselves and their loved ones in danger. Denial is not likely to be a successful strategy for survival over the next months.”

Joe Biden praised Sen. Bernie Sanders for having a “significant” influence on American politics and said he hopes his primary rival will play a role in his own campaign, The Hill reports.

Said Biden: “If I’m the nominee I can tell you one thing — I would very much want Bernie Sanders to be part of the journey. Not as a vice presidential nominee, but just in engaging in all the things that he’s worked so hard to do, many of which I agree with.”

“In announcing his support, Lewis paired his endorsement with a public recommendation that Biden pick a woman of color as a running mate.”

Said Lewis: “I think Vice President Biden should look around. It would be good to have a woman of color.”

Harry Enten: “President Trump has dominated the airwaves during the coronavirus pandemic. Meanwhile, former Vice President Joe Biden, the frontrunner in the Democratic primary, has struggled to break through, which some see as a problem for his campaign. But I disagree. As Trump campaign manager Brad Parscale notes, they don’t want to let ‘Biden hide in the shadows.’”

“A look at the data suggests that Trump is losing to Biden right now because voters see this election as a referendum on an unpopular Trump. Trump likely stands a better chance if this election is a choice between Trump and Biden.”

A new Public Policy Polling survey in Louisiana finds Gov. John Bel Edwards (D) running 43 points ahead of President Trump on his handling of the coronavirus in the state.

Key finding: “68% approve of the job Edwards is doing handling the virus to 16% who disapprove for a net rating of +52. Democrats (81/8), independents (60/19), and Republicans (56/25) alike give Edwards good marks. His overall approval rating is similarly high with 66% approving and just 18% disapproving of his work as Governor.”

“Opinions on Trump are much more closely split and polarized. 50% approve of the job he’s doing handling the virus to 41% who disapprove for a net rating of +9.”

“President Trump is launching a daily schedule of online campaign programming that, combined with daily White House briefings, is part of a double-barreled strategy to woo voters virtually after the coronavirus canceled live events,” the Washington Examiner reports.

“The Trump campaign plans to broadcast one marquee event on its website and social media channels each day this week and nearly every Monday through Saturday in the weeks ahead. The programming is an acceleration of efforts to reach voters amid a public health crisis that grounded the president’s robust itinerary of stadium rallies and roundtables, as well as similar gatherings hosted by prominent supporters.”

Steve Kornacki: “Four years ago, he was also too far behind in delegates to overtake Clinton and win the nomination. But he continued to run competitively through the end of the primary season, winning states into June. And each victory, or even near-miss, amounted to a show of strength, a reminder that a big chunk of the Democratic Party wasn’t sold on Clinton.”

“But what if, this time around, he sticks it out and there are no more primary wins or even near-misses? What if it’s just one landslide defeat after another?”

“If the late stage of the ’16 primary season enhanced his clout, would finishing up now with a string of lopsided losses diminish Sanders and his movement? When he says he’s ‘assessing’ his campaign, that may the kind of dilemma he is hinting it.”